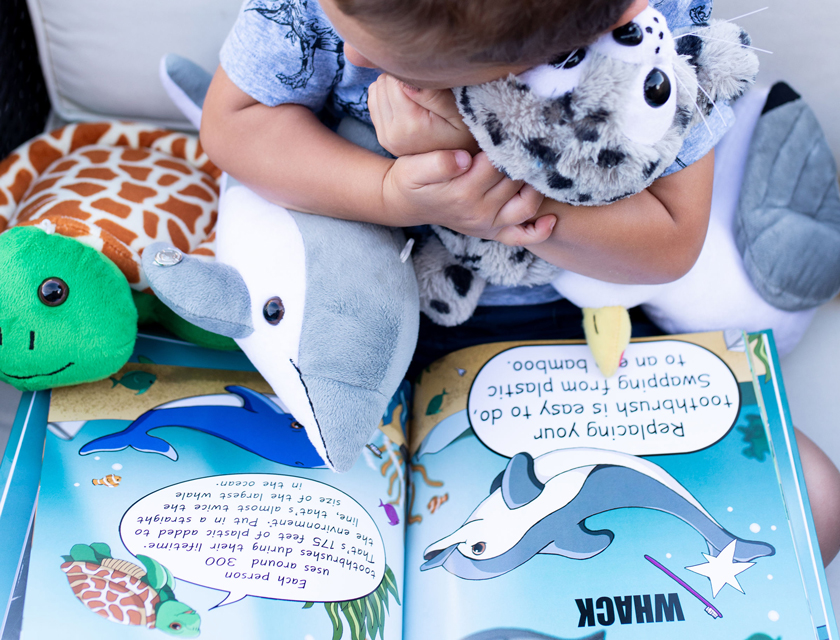 “You sit down at a restaurant and someone puts a plastic cup right in front of you. What is going on? The ocean is right there.”

Malte Niebelschuetz quit his corporate job in Deusseldorf, Germany, in 2010 and moved to San Diego for its sunshine and beautiful beaches.

The young serial entrepreneur remembers going to beach cleanup events where people would pick up garbage with one hand while carrying a plastic bottle that was soon to be garbage in the other.

“What really tipped me over was the restaurant industry,” he said. “You sit down at a restaurant and someone puts a plastic cup right in front of you. What is going on? The ocean is right there.”

Frustrated by the sometimes-hypocritical actions of Californians in terms of single-use plastics, Niebelschuetz began researching. He found a company named Patagonia that makes outdoor jackets from recycled soda pop bottles.

When he put away his laptop, the first thing he saw was a stuffed seagull he had brought with him from Germany. He wondered whether these could also be made of recycled plastics, figuring that if “you can make a T-shirt from recycled plastic bottles, you certainly can make a stuffed animal.”

Thus marked the unofficial birth of his company, Shore Buddies. Not to mention the birth of Finn the Dolphin, Sammy the Seal, Shelly the Sea Turtle, Steven Seagull, Emma the Whale …

Niebelschuetz’s four-year odyssey to get his product to market was rife with challenges, especially finding a factory that could make plush toys from recycled materials.

He started his search locally in California. No one had made stuffed animals this way, so it was difficult to convince people to help.

Eventually, he shifted his search to overseas options. He used the website Alibaba to identify factories and eventually found one in China that had experience with recycled plastic fabrics.

“China has historically had a long history in fabrics,” he said. “China and India used to be the ones developing new styles of fabric. They were really ahead of the curve when reutilizing plastics.”

The factory used techniques of harvesting recycled plastics similar to those done for seats in Tesla cars and adapted it for use in Shore Buddies.

The bottles are collected and sorted by recyclable collectors, then cleaned and shredded into plastic flakes. Some of these flakes are used for the plush toys’ stuffing; others are melted and turned into polyester yarn for the soft outside.

Niebelschuetz launched Shore Buddies by taking them door to door. He made a first production run of 5,000 of the toys and started bringing them around to shops in the San Diego area. He had Shore Buddies in more than 100 stores by the end of 2015.

His company slowly built a regional following that he leveraged into an ecommerce strategy to sell nationwide and eventually into international markets. He also launched a Kickstarter campaign for Shore Buddies in 2018 that raised more than $10,000.

Niebelschuetz has quoted statistics that say there will be more plastic than fish in oceans by 2050.

Plastics are seen as cheap and easily disposable. This non-biodegradable mass fills our landfills. When it does not make it to landfills, it starts to choke natural areas including oceans and beaches.

Each of the five Shore Buddies characters takes approximately six water bottles worth of plastic to make one of them. When pressed, they make a realistic sound from the animal based on recordings from the actual species.

Each animal has a backstory and mission that highlights an aspect of recycling and sustainability. For example, Sammy the Seal hates single-use plastic bags and encourages reusable grocery bags.

A children’s book, “Shore Buddies and the Plastic Ocean,” brings to life the plush characters as they help fight ocean pollution, and a YouTube channel hosted by Niebelschuetz supports the characters and sustainability mission.

Shore Buddies also donates $1 with every purchase to a local, ocean-minded nonprofit organization. The company goes to low-income communities and gives out keychains that feature the characters. Niebelschuetz visits schools to educate children about sustainability and the growing amount of plastic in our oceans.

Niebelschuetz hopes his company can become a new paradigm in sustainability for the toy industry. He is trying to make a real impact on curbing plastic waste and protecting the ocean, leveraging the characters and digital content to create awareness that will drive change.

“With Shore Buddies, we really see the opportunity to educate what is going on with single-use plastic,” he said. “Our vision is to build this big ecosystem of educational information around ocean plastic and make sustainability a second language literally through play.”

His innovative process and positive messaging garnered him a Toy Association Toy of the Year finalist award.

Despite the pandemic that began in 2020, it was the company’s most successful year. Shore Buddies expanded internationally.

Niebelschuetz continues to work on new developments to the product and adding content to his YouTube channel. He is working on baby characters to complement the current five offerings, and is working on a version made from recycled plastic that is specifically harvested from the ocean or beach.

He has also been approached by other plush toy companies to make sustainable versions of their more popular characters, which will expand the reach of the technology and boost his mission to keep garbage out of our oceans on an even larger scale.