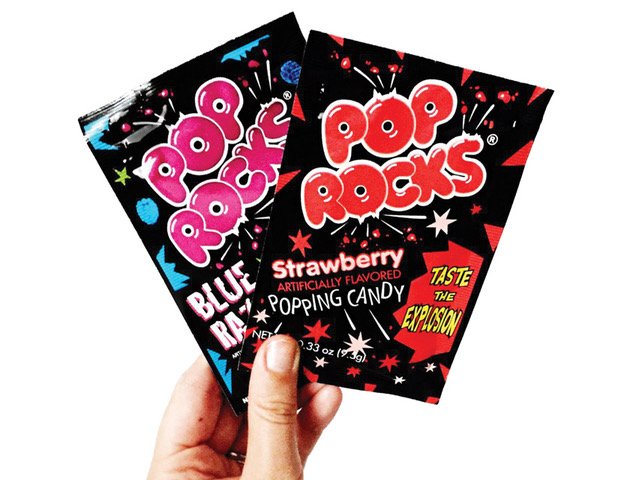 “It snaps, it fries—you don’t know where it’s coming from!”

—William A. Mitchell, about his Pop Rocks

All William A. Mitchell wanted was to create an instant soft drink.

When the General Foods chemist began his experiments in 1956, even his runaway imagination could not fathom that two decades later he would go on speaking tours to assure parents that his accidental invention—a candy marketed as Pop Rocks—would not hurt or kill their kids.

Or that General Foods would take out a full-page ad in 45 major U.S. publications to verify the product’s safety.

Or that the company would deliver about 50,000 reassuring letters to school principals.

Or that the Food and Drug Administration would set up a hotline to keep the public calm.

To better comprehend the depth of this fear, remember that this was before the Internet—where the fuse for misinformation and paranoia can burn and spread in a matter of minutes. This particular rumor had a solid foundation dating to shortly after Pop Rocks was (were?) commercially introduced in 1974.

Before General Foods began selling the candy, Mitchell used to include it when he sent holiday cards. “Oh, man!” he told People magazine in a 1979 interview. “It snaps, it fries—you don’t know where it’s coming from!”

Many people of a certain age recall the startling oral tingling and popping after downing a handful of the pebble-like treats, available in an assortment of fruity flavors. Mitchell would have loved to attribute the formula to his science savvy. But it was simple serendipity.

But when Mitchell put the powder in his mouth, the carbon dioxide activated when the heat and moisture of saliva dissolved the chunks. The result was snap, crackle and pop on steroids.

Fellow scientists visited his lab and quickly acquired a thirst for the burst. They learned how the concoction—then known as Carbonated Candy—was prepared, as explained in U.S. Patent 3,012,893.

The mixture is heated to 280 degrees Fahrenheit, and carbon dioxide is added under pressure of 600 psi (about half the pressure used in soda). When the mixture cools and the pressure is released, the material hardens and shatters into tiny pieces. Those small fragments are filled with bubbles of carbon dioxide.

A world of urban legend

Candy that explodes in the mouth? This seemed like the kind of dentist’s nightmare and kid’s dream that youngsters would literally eat up. The candy was patented in 1961.

But a long rain on the fireworks ensued.

According to People, General Foods “spent nearly 18 years trying to decide how to market” Pop Rocks. Finally a 1979 TV commercial aired, with the slogan “The Cracklin’s What’s Happenin’.”

But not much was happenin’ on store shelves. General Foods pulled the product in 1983, partly due to lackluster sales and its relatively short shelf life. Prominent in the fizzle were persistent rumors that a child ate a large quantity of Pop Rocks and washed it down with soda—and died after his stomach swelled with gas and exploded.

It never happened. And although Mitchell claimed the amount of gas in the candy is less than one-tenth the amount in a can of pop, the loud whispers grew.

Urban legend went ape-doody. It claimed that John Gilchrist, the actor who played Mikey in the iconic 1971 Life cereal commercial, died when his stomach blew up after consuming Pop Rocks and carbonated drinks.

To this day, pop-rocks.com is quick to rebut: “The actor who played little Mikey lives today in a completely unexploded form in NY.”

The public alarm silenced with time. In 2008, Discovery Channel’s “MythBusters” tested the myth using pig stomachs filled with hydrochloric acid to approximate a stomach’s acid. Not enough carbon dioxide was produced by the reaction to cause an explosion.

Pop Rocks, distributed in Atlanta in the United States, remains the world’s leading manufacturer and seller of popping candy. It is now owned and manufactured by Zeta Espacial of Barcelona, Spain, which exports it to most countries.

Mitchell, who spent 35 years with General Foods, died in 2004 at 92. He was the leading inventor behind Jell-O, Tang and Cool Whip, and received 70-plus patents in his career.

But he will always be best known for Pop Rocks, even if the talk of danger always amused him: “The worst thing the rocks could do is make you burp.”

The mouth-crackling ingredients in Pop Rocks make for a wide variety of uses, in food and even in cocktails. One popular drink is Jell-O shots with Pop Rocks—ironic, given that the candy’s inventor, William A. Mitchell, is generally considered the inventor of quick-setting Jello-O.

Pop Rocks can even help with science projects. Although the typical science project volcano combines vinegar, baking soda and red food coloring to produce a foaming “eruption,” the Growing a Jeweled Rose website shows you how to add Pop Rocks for a better blast.

U.S. Patent No. 3,012,893 was issued to General Foods research chemists William A. Mitchell and Leon T. Kremzner by the then-United States Patent Office on Dec. 12, 1961. The application had been filed by General Foods Corp. on Jan. 6, 1959. The patent is titled “Gasified confection and method of making the same.”