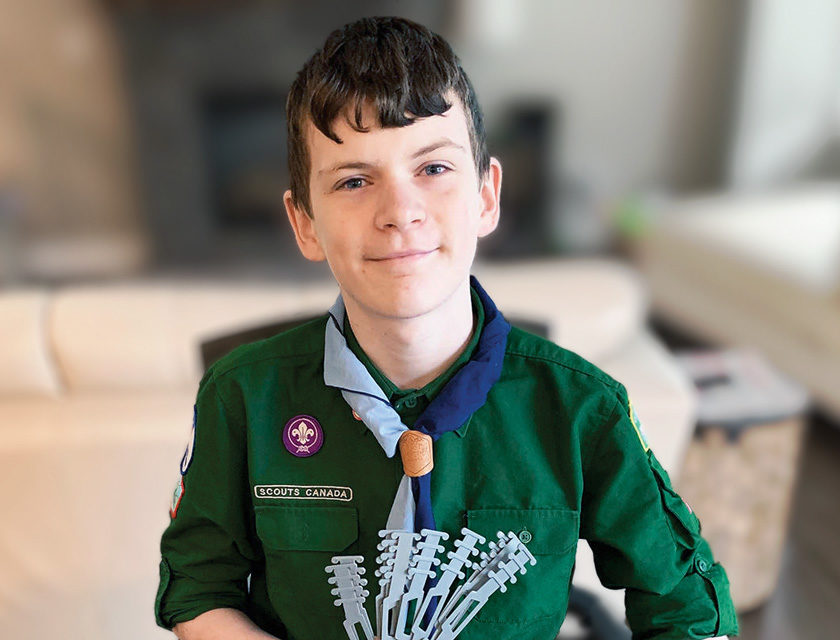 A team of researchers at University of Massachusetts Amherst  developed an IoT-enabled tool to help identify flu symptoms in a crowd.

FluSense, a Raspberry Pi-enabled device, has an array of microphones and other sensors to track the density of people in a given space and listen for coughing and sneezing that are an indication of flu-like symptoms. An on-board neural engine provides edge computing capability to figure out how many individuals are experiencing symptoms at a given time, with results sent wirelessly to a data center.

Testing has been ongoing since 2018, with trials at UMass’s University Health Services clinic. FluSense is due to be trialed in large public spaces before pushing the technology toward a commercially viable form factor.—Jeremy Losaw

The Bacon-Scented Mustache, by Archie McPhee, is a carded, 4-inch-wide mustache with adhesive backing. The ‘stache is made of synthetic hair and smells like bacon. Its makers call it the “perfect thing to wear while woodworking, fishing or internalizing your emotions.” Bad sign: The list price of $10.70 on Amazon has been shaved to $3.02.

Quinn Callander, a 12-year-old Boy Scout from Maple Ridge, British Columbia, built hundreds of ear guards for health care workers by using a 3D printer he received for his birthday last year. Quinn’s mother, Heather Roney, said she and her husband saw a Facebook post in which a Royal Columbian Hospital nurse sought volunteers to make the guards. They attach to ear loops of masks to give more of a custom fit, relieving ear pressure and pain for health care workers who are wearing the masks all day. She said Quinn and his father went onto a website for 3D print projects, ran some tests, and Quinn began printing “non-stop.”

The amount of money expected to be at risk in 2022 in prescription drug sales worldwide due to patents expiring, per statista.com. After patent protection expires, other companies can make cheaper generics of the originally branded drug.

1 In what year was the first successful vaccine developed?

3 Which was invented first—the transistor radio or the hairdryer?

A) His son frequently skinned his knees

B) Dickson had a persistent sore on his forehead

C) His wife often cut herself in the kitchen

D) He wanted to use it as a diaper fastener

1.A. Edward Jenner developed the vaccine for smallpox. 2.False. Three were issued. 3. The transistor radio was invented in 1947 at Bell Laboratories by John Bardeen and Walter Brattain. The hairdryer was invented by Alexander Godefroy in France in 1890. 4.C. 5. False. The  trademark belongs to Philadelphia Phillies outfielder Bryce Harper, who made that comment to a reporter when asked if he was going out for a drink in Toronto when he was 19.