Racing Ahead for Science 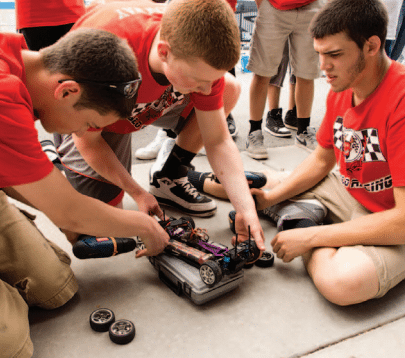 When middle and high school education hits the news, it is typically in the form of debates over standardized testing, or stories about how American students are falling behind in math and science. While that may be true from a macro view, there are plenty of programs that stimulate free thinking and foster innovation. One that I have been involved with for the last six years is the National Stem League Racing Challenge, which uses R/C cars to teach math, science, engineering and marketing skills. Each year they host a national final event for the top teams in the program to go head to head in on-track races, as well as in static science fair-style events. This year’s final event was held at the NC Research Campus in Kannapolis, NC and I attended to see what innovations the students had developed this year.

The National Stem League Racing Challenge was started by Beverly Simmons and Jeff Thompson, and its roots go back to the 1980s. As educators they realized that something was missing from the science and math curriculum. “Something I learned … was that students need to practice math and science on their way to STEM [science, technology, engineering, and math] careers; just as children practice baseball or basketball on their way to the MLB or the NBA.

The National Stem League Racing Challenge builds on students’ love of racing, cars, design and competition,” says Beverly. Since then, the program has grown from just a handful of schools to a nationwide program with more than 400 schools taking part each year. The U.S. Army, the Harris Foundation, NSBE, Boy Scouts of America, SolidWorks, Spark Fun and other tech companies have partnered to help bring high tech software, equipment, and practices into the classroom to help prepare the students for college and beyond.

The 2014 finals were contested by 36 schools from as far away as California and Massachusetts. While there was plenty of action on-track, I was particularly interested in the creative engineering event where the students presented their innovative projects. Here is a sample of the best projects from this year’s event.

Additive manufacturing in the form of 3D printing is as hot a topic in the Stem League as it is in the wider world. The most interesting execution of 3D printing was from the AMSA school from Marlboro, MA. They made their own car body from a desktop printer. They designed the body in SolidWorks, and used ABS filament to make the body in 8 pieces. Then they glued the pieces together and gave it a tidy silver paint job.

Once of the most over-stated mantras in racing is that “the race is won in the pits”. This is just as true in R/C cars as it is in full scale auto racing, so assessing car performance in a scientific way was a hot topic amongst the teams. There were two notable test rigs that caught my eye; wind tunnels and chassis dynamometers. Many teams built wind tunnels, but one of the best was done by the Pleasant Hill Middle School in Lexington, SC. They made a wooden wind tunnel with a standard 18 inch box fan that sucks air through the front of the wind tunnel. The car is placed on a platform in front of a postal scale that measures the drag of the car. It was well made with a locking door and was painted in the team’s colors.

Motor performance is just as important as aerodynamics, and the East Technical Career Academy from Las Vegas, NV developed their own chassis dynamometer to get the most from their motor. They scavenged a chassis from an R/C monster truck and mounted it to a wooden frame. Then they mounted their racecar on top of the monster truck so that the rear tires would turn the monster truck tires. The monster truck chassis provided the load to the motor, and they added a speed sensor and a data acquisition system to record data.

Green energy was also hot topic at the event. Many teams had variations on using solar panels to charge their car batteries, but a couple of teams had some more unique ways to harvest green energy. The TERRA school from Miami, FL developed a wind turbine generator to charge their batteries. They built their own propeller unit and married it to an electric motor to generate electricity.

Boulder City High School from Colorado developed a way to use solar energy to generate electricity in a unique way. They used a solar collector mounted to a small Sterling Engine to spin a fly wheel. The solar collector would heat the air on one side of the piston, which would expand the gas and push the piston to get it moving. Then the energy stored in the flywheel and the air slightly cooling in the cylinder would drive the piston back down to finish the cycle, and inducing a constant rotation of the flywheel. The flywheel was mounted to an electric motor working as a generator to create an electric current.

When the day was done it was the AMSA team from Marlboro, MA who took home the national title for the second year in a row and kudos are in order for their students and advisors. However, there is surely plenty of praise left for the rest of the teams who worked so hard and used the STEM League program as a launching pad for them to develop innovative ways to solve the problems of making their cars perform better and have less of a carbon foot print.

It is programs like this that will help students to practice the art as well as the science of engineering that will fuel the innovations of the future.