Reinvented, and It Feels So Good 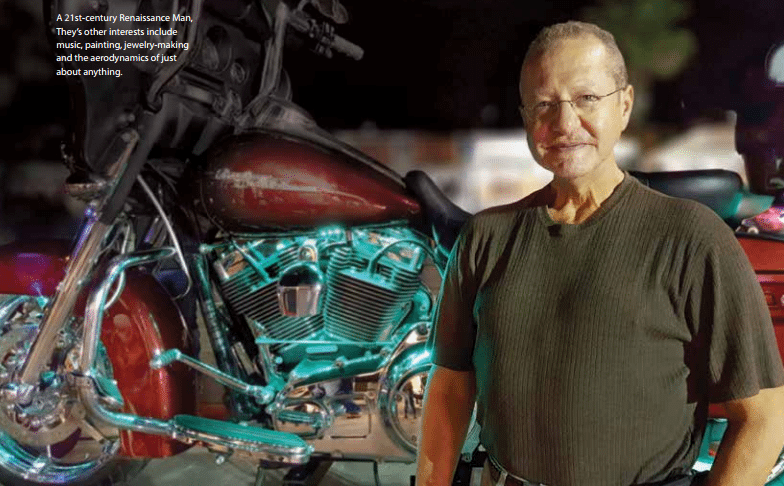 Yes, his name is they. No, there’s no stopping him now.

Of course you’re the curious type; you’re reading this magazine. So you probably want to know why someone would legally change his name to They, and we’ll get to that. Just know that by the time you finish reading the story of The Artist Formerly Known As Andrew Wilson, the name change may feel like a footnote.

There’s this cacophony of invention ideas constantly crashing through They’s brain, and he’s not shy about sending them to Inventors Digest. That’s a good thing. Even though he has 14 patents—including ground-effects lighting for underneath vehicles that enjoyed great popularity in the late 1980s even to today— his motivation has seen some highs and lows during a lifetime of  severe challenges, physical and otherwise.

One constant has been “the thrill and satisfaction to see a thought become a reality,” the 55-year-old Texan says, “and the stuff that I come up with has almost always been necessity driven. Even the ground effects lighting was never have supposed to been a play toy. It was supposed to create an indirect silhouette of light around your vehicle so that other drivers could see your position and speed in either heavy traffic or bad weather.

“The interesting part was, I could not give them away with that mind-set. But one night I’m driving in south Houston, the lighting was under my Suburban, and a couple kids saw my prototype and thought it was totally cool. They asked me if I could make a couple sets for their sports cars. Back then, LED didn’t exist, and neon was too fragile to work with and expensive transformers and all that. So I ended up making 12-volt fluorescents. That was how ground effects actually became popular.”

Revitalized to help others

In early September, They sent an email to Inventors Digest asking whether he could buy an issue of the magazine from 1986 (unfortunately, back issues that old aren’t available). He recalled being
mentioned in the magazine in connection with one of his inventions; he wasn’t sure which one. That mention was a turning point for him, as has been his recent reconnection with Inventors Digest.

“What you have brought back to my forefront is something I cannot put a price on, simply because of what it represents and what it’s going to represent,” he said. “Inventors Digest, back in
the day, brought me a pulse that set my course for the rest of my life. It gave my work validity, which has always been the only important thing for me.

“I have learned much reading about other inventors, their inventions, and that innovative spirit that is just a hoot to experience. I’m revitalized one more time.”

In a two-month span that followed, They sent Inventors Digest information, internet clips and musings about several real and potential projects: a bicycle version of his ground-effects lighting for cars, with “maybe the most efficient 360-degree, no-glare ‘see me’ lighting system the bike industry has seen since the headlight, powered by a USB-rechargeable battery pack”; contemplation
of a Bluetooth monitor for infants—“kind of like a Fitbit worn around the chest that would monitor a child’s heart rate, respiration and pulse with an instant alarm 24/7, which could eliminate SIDS deaths”; even a concept for universal basic income that is as revolutionary as it is layered.

His featured main project while making his way back into inventing is a fire-suppression apparatus called the Typhoon system. “It’s going to change the dynamic of how structure fires are fought,” he says.

“Ventilation is a master need in any fire situation. A lot of fire departments work to get ventilation inside. What I did was inject high-pressure, high-volume air into the nozzle system itself so that nozzle system actually injects water vapor-saturated, pressured air in the structure, giving it no choice but to exit and ventilate the heat and gases. Firefighters would then be working in a safer, wet, clear environment.”

Another is Work+Safe—breakaway clothing that prevents people from being entangled in heavy machinery, often resulting in amputations and death.

When explaining why he wants to donate many of these inventions, his calm, soft drawl morphs into a tone of conviction and urgency.

“It’s got to be open source,” he says. “I’m not patenting these things, because anybody and everybody should be able to benefit. These can save lives and injury, and that’s my focus—not the corporations and the insurance companies, but the actual people on the ground who benefit from it.”

30 surgeries: Not Nirvana
This innovative flurry is making up for lost time, They says. “For many years, I’ve been out of circulation due to some events that were not Nirvana in my world.”

He says he’s had more than 30 surgeries. Five of them were associated with cancer, and then there were the two years of chemotherapy and radiation—which led to heart problems. The grand total, or what he remembers: Eleven heart catheterizations, three heart stents, one aortic stent, spleen, gall bladder, lymph nodes, four back surgeries, quad-bypass, cut-downs on both feet, left arm, left leg. Also, a recent sinus reconstruction because he crushed his sinus cavity years ago while freediving.

He figured he might as well make himself useful while undergoing chemo. “I had the idea to put a tourniquet around my scalp to limit blood flow during the process. My thinking was that since the chemicals were short lived, restricting scalp exposure could reduce hair loss.

It worked. I didn’t lose my hair, except where the tourniquet didn’t cover.

“I heard later that doing that and using icepacks and cooling has become a mainstay in chemo treatment. That was a proud moment.”

Not as proud of a moment, but uniquely They, was when he was shot by his own gun. “It was a .357 hollowpoint, caught in the right upper leg, through and through,” he says matter-of-factly. “It was an attack by someone who was schizophrenic, though I didn’t know it then.”

Even then, the inventor in him soon took over. “I noticed that the bullet, a top-dollar hollowpoint bullet, didn’t open or expand as it should have. So I sent a nasty letter to the ammunition company, told them their bullets weren’t worth a crap, and I wanted my money back. I never heard back from them, and I made a new bullet design that would open as designed. I called them ‘Hypercav’ bullets. It is a ‘ported’ bullet, designed to expel the center cavity gas as it hits an object.”

But did They appear in Us?

“None of my world is purposefully unique,” They says. “It’s just always seemed to turn out that way.”

But sometimes he gives it a little nudge. In 2004, he walked into a courtroom in Taney County, Missouri, and changed his name to They.

“My intention was to just play a little bit,” he says. “ ’They do this; they are to blame for that.’ Somebody has to take responsibility. … Three days after I had done this legally, I was looking at my
homepage and saw the headline about my name change on CNN’s website. The AP picked up on it, and from there it went ballistic.

It was everywhere. MSNBC, Time magazine, NBC, CBC, ABC, USA Today, hundreds of newspapers, Reader’s Digest, Ripley’s Believe it or Not, Dozens of radio stations around the world called to do interviews, including NPR, and the online forums were everywhere.

“During all these interviews, I was asked what I did for a living. I told folks I was an inventor, and they would ask what I’ve invented. It was at that time I was working on my Shades sunglasses
with a built-in visor over each lens. That launched Shades into the light, and I had orders start coming in from everywhere.

“For a brief mention of a name change, and a $350 ‘investment’ in an attorney and court costs, I inadvertently got over $250,000-plus worth of advertising for my sunglasses.”

This was a fun time in a life that has had its share of loneliness. The son of an invention-minded mother (“She was part of the scientific team that helped develop and test radar for the U.S.
in the early parts of World War II”) and a traveling minister with Marine training, he bounced around from state to state, school to school, and wasn’t close to his four older brothers.

“I wasn’t part of anybody else’s world,” They says. “I was always considered the black sheep. … I didn’t count. If I did something wrong, said something wrong, I would end up getting a beating—and there were a lot of them from my father, who was an abusive, bigoted person.

“I had no supervision, no guidance. So here’s this little scientific-minded kid, out exploring. When I was 10, 12 years old, I would go out hunting for two or three days at a time by myself. Nobody told me I couldn’t do these things. I did all these things and satisfied my curiosity. That’s my toolbox I’ve brought to everything that gives me an understanding of the world around me. Everything mechanical, I instantly understand it.”

He acknowledges the obvious sadness of such a childhood. “But I don’t lock in on that. Nobody cared enough to interfere with me. That was my advantage. I feel blessed.”

His penchant for experimentation and quick learning continued throughout his short time at Rice University. He worked in power plants and aerodynamics, heavy equipment companies,
among many other jobs, and went to electronics school and photography school. “Every time I would quit because I got what I wanted out of it, got really bored, or ran out of money,” he says.

Because of his passion for inventing and what he has accomplished on his own, it’s not surprising that They is outspoken in defense of the independent inventor. “We’ve stifled so much potential,” he says. “If you’re going to have an economy that is struggling with funding, you don’t take from Peter to pay Paul. You create something new. That’s what innovation and invention brings.

“We need to go back to first-to-invent. We need to put government-sponsored systems and programs in place to help and encourage independent inventors through incubators, through funding, through sourcing, and supporting that. While these things are being done, we need better protections from the patent and trademark office that would allow (inventors) to move with greater freedom and protection—and set up a sponsorship program with corporations which would take pressure off them.”

He doesn’t know specifically what’s ahead, only that he will stay busy. They is a fine painter who also makes jewelry and taught himself how to play the piano, among other talents. “I’ve had
enough encounters in my life to have a total appreciation for every single day and every single moment that I have … I have been nearly dead or dead for three minutes at a time. If you’re able to
walk away from that, you have a unique appreciation for this.”

Given his history and planning, it will be hard to sink him. “I’ve already designed my casket,” he says. “Half-inch fiberglass with a foam core, because I want it to float. Why not? I’ve traveled
all my life; I love the water.” And then, no more They. “Just call me Bob.”