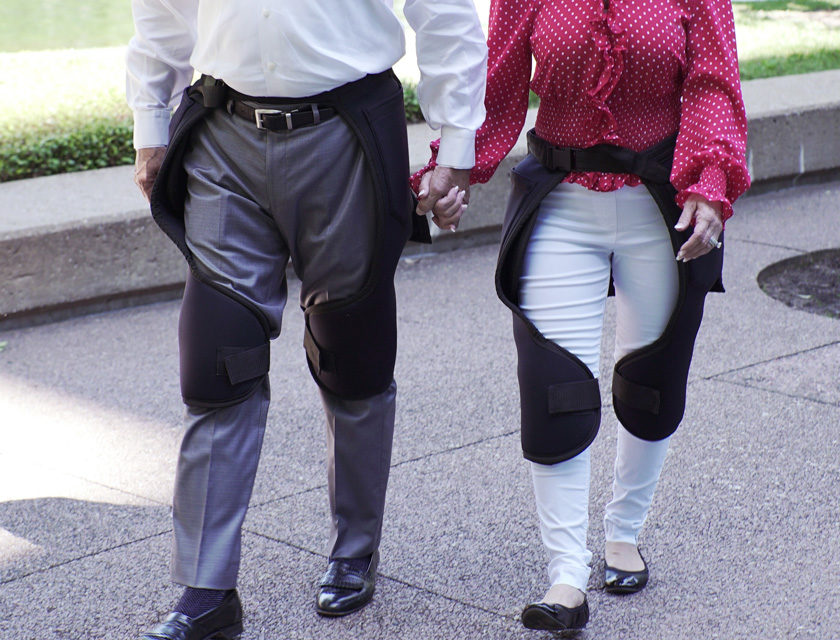 “The more I found out about (the high number of injuries and deaths to seniors from falls), the more determined I was to do something about it.”

It wasn’t just unfair. Frank Bowles knew it was dangerous.

As a board of advisers member at a Dallas hospital, he appreciates the potentially life-changing or fatal consequences of falls for elderly people and was upset that there was no good solution on the market.

“And to think that there are 60,000 people per year losing their lives due to a hip fracture. The more I found out about this, the more determined I was to do something about it.”

The U.S Centers for Disease Control and Prevention reports that on average, one adult dies from a fall or fall-related injury every 19 minutes. Even when falls are not deadly for senior citizens, they can do serious damage to quality of life.

Bowles went to work on a product that would help save lives and be of reasonable cost for people on fixed incomes. After 2 1/2 years he developed a product, HTK Pads, to help older people stay active with confidence.

Launched in mid-2019, the padding system is worn over the top of clothing to protect a user against injury from a fall. It is specifically designed to protect the most vulnerable injury areas: the hips, tailbone and knees (hence the acronym HTK).

The pads are made from a firm rubber that better distributes the loads from a fall. The outer construction of the garment is made from Neoprene, which is comfortable, compliant and anti- microbial. A mix of Velcro and snap connections make the product easy to put on and take off.

HTK pads can be worn in bed as well as outside the home; they come in many different sizes to fit most users. They are available for $389-$409, depending on size, from the company website.

Once he had the bug to solve the issue of hip injuries, Bowles started prototyping a solution. He noticed his fiance’s workout mat lying around the house and could not help himself. He cut up the mat to make some pads for testing.

After sewing together some prototypes and doing some testing, he realized that the soft foam pads were not going to be sufficient to prevent major injury. Additional research on soft foam padding showed that it was only minimally effective against major injury.

With additional research, he found that he could layer together soft and hard pads to create a composite cushioning system that would distribute the load during a fall and prevent concentrated loads from getting to the bones.

Now that Bowles had a pad design, he needed to house them in a comfortable garment.

He found a local sewing manufacturer that specializes in parachute sewing. With its industrial-grade equipment, it created the pant-like structure of the HTK pads garment—combining the composite pad structure inside the neoprene exterior.

Although reducing hip injuries was the primary goal, he realized that with minimal design changes, the product could be made to easily protect the knees and tailbone as well. “That’s when I thought … while I am doing this, I am going to try to put a 3-in-1 system together.”

The parachute company finished making a prototype, and it was ready for testing.

The first user of the pads was a 97-year-old woman in Bowles’s community. She had suffered many falls, and had bruises and the lack of mobility to show for it.

The woman was initially intimidated by the product. But after a few minutes of use, she was wearing it comfortably and forgot she had it on.

HTK Pads also gave her the confidence to walk by herself. Her walking posture changed from hunched over, bracing for a fall, to upright. It was a great first test for the product and validated the inventor’s vision.

Bowles has filed patents on the technology, which has given him the confidence to speak openly about the product and ramp up his marketing. Although the United States is his primary market, he is considering Mexican and other international patents. However, the patent filing process is expensive; additional filings hinge on sales volume to fund the additional intellectual property.

The cost of the product was a primary factor in choosing a manufacturing partner. Bowles wanted to keep it as low as possible to make it accessible to the masses, including seniors.

He tried to use U.S. manufacturers, including his parachute factory, but the costs were too high. Fortunately, he met someone with a connection to manufacturing products in Mexico who was able to help. Bowles found a suitable facility there, and the cost of the product came in at about one-third of what it was in the United States.

The product got great reviews within a few months. Bowles has been featured on local news stations, radio, podcasts, and has been working with a PR firm to help drive sales. He has even sent samples to Jimmy Carter and his wife in hopes that it will help them during their rehabilitation from recent falls.

He is also working to find other markets for the product. Parkinson’s sufferers, children’s hospitals, ski schools, and law enforcement are among the audiences interested in adapting the HTK technology.