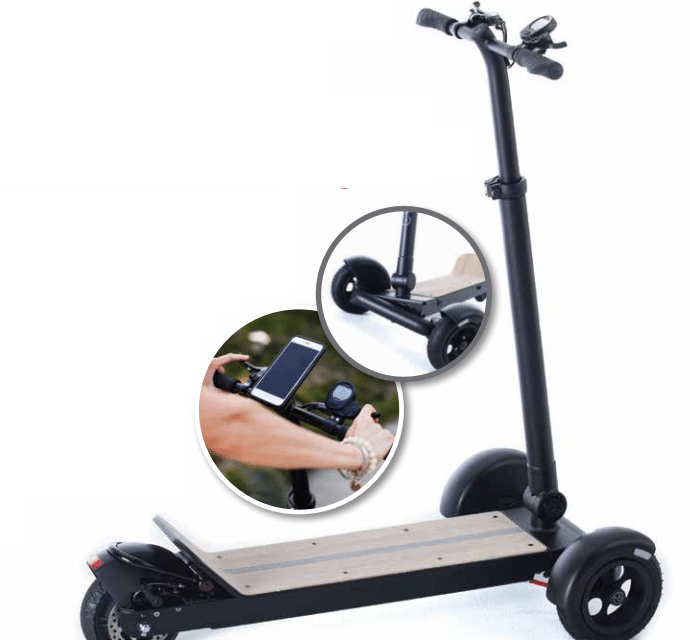 Phil LaBonty just wanted a better way to have more fun outdoors with his kids. A father of three from Southern California, he found that his 3-year-old did not have the stamina to ride a bike for very long and that bike trailers created a disconnect between him and his children.

“I thought, ‘There has got to be a better way to bring the kids along with us on family outings … that is fun and safe and a shared experience,’” says LaBonty, who studied physiology and ran a financial services company. The result: CycleBoard, a battery-powered, three-wheeled electric scooter that seeks to diversify the transportation market.

LaBonty’s invention leverages the increasing capabilities of batteries which, as they become more powerful and lightweight, open the door for new products and redesigns of existing products. Tesla is pushing boundaries of electric car design. Lightweight drones are filling the sky. Powerful electric tools that were once plugged in are now battery powered.

CycleBoard has a distance range of up to 20 miles and a top speed of about 20 mph. Its skateboard-esque platform has three wheels, two in the front and one in the rear. The rear wheel is driven by an electric motor that is they mount inside the hub.

Levers on the handle control the throttle and brakes; steering is done by pivoting the handle and the board. The control system features five different drive modes to limit the top speed for younger or inexperienced riders. The deck is interchangeable to create a custom look, and there is a smart phone mount and USB charging port.

The initial concept for CycleBoard was to make a bike-towed apparatus. LaBonty had some old bikes and bike trailers and set to work building a prototype. He even commandeering parts from an old shovel. The result was a skateboard that attached to the back of a bike that a child could stand on and ride. But after several months of refining, the concept was abandoned due to safety concerns.

This could have been the end for CycleBoard, but LaBonty knew the DNA of the product was sound. He decided to scavenge the unique steering mechanism, remove the bike attachment and make it a standalone electric vehicle.

Making the product electric expanded the user demographic to adults but also introduced some engineering challenges. With adult riders, it had to hold much more weight than before. Testing
was done with different motors, batteries and tires to get a good balance of speed, handling and run time. Fortunately, LaBonty found a design firm, Idea House & Co. in La Verne, California,
that could help do the detailed design work to get the product to work well.

After months of work, the result was a design that included a custom-sized LG lithium battery pack, an electric motor mounted in a custom hub gear box and custom tires for better grip. Adjustments to the turning yielded a platform that is stable but also allows the rider to aggressively carve turns.

CycleBoard has three pending patents and a fourth on the way. LaBonty used a web-based legal service to file the initial provisional and used an attorney to file the full utility patents: “I quickly realized I needed a greater level of (legal) expertise.”

At first glance, the product looked like a new type of Segway personal transporter, and he thought it would be difficult to work around those patents. However, CycleBoard does not have any of the gyroscopic controls and has a totally different layout, so it was not an issue. LaBonty feels his speed to market and branding will help in sales of the product.

Once the design was complete, he took CycleBoard to Kickstarter. He wanted help from the community to fund the manufacturing, but he was also after social proof and market feedback to validate the product. Understanding the immense challenge of crowdfunding, he turned to the marketing firm Command Partners in Charlotte, North Carolina, for help. Their staff of marketing specialists helped build awareness for the campaign, which ran for 30 days and raised $147,404—more than twice the initial $70,000 goal. This supported the product’s market viability and was crucial in helping LaBonty raise an additional $400,000 from private investors.

Although CycleBoard was launched this year, the first manufactured product is expected to ship before year’s end. Fortunately, Idea House had an established relationship with an overseas manufacturer; having that in place shaved months off the normal product development timeline.

As the buzz around CycleBoard continues to build, the team will be at the Los Angeles Auto Show as one of the exhibitors in the first year of the electric ride on showcase. Further plans include the Consumer Electronics Show as well as an invitation to attend the Deloitte Technology Garden. LaBonty is also working on a new version of the CycleBoard that is lighter, has more aggressive steering, and will have a changeable battery.