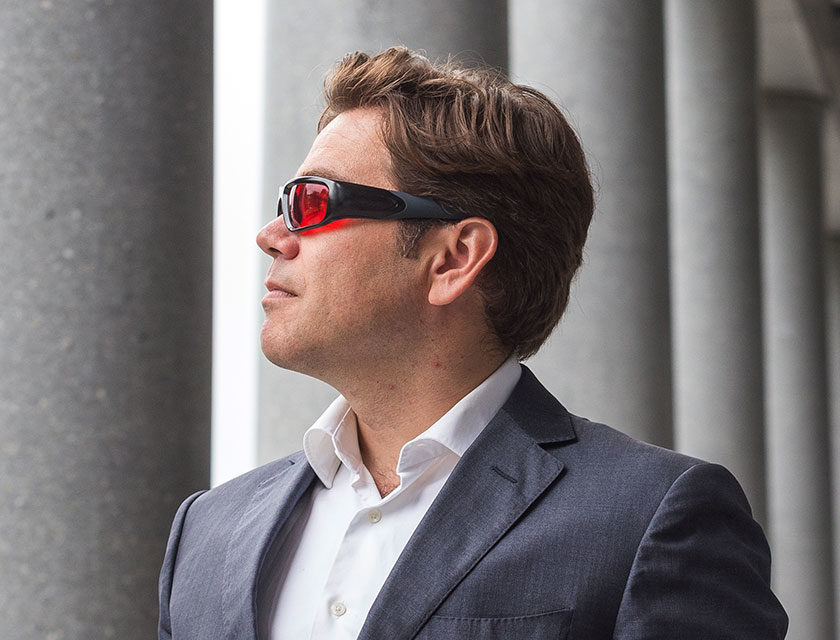 “In 2007, I made my first light therapy glasses. This went into the fridge, more or less. It was too early.”

With the exception of the holidays, this time of year is often associated with the “winter blues.”

The shorter day lengths and lack of sun in many parts of the northern hemisphere have a depressing effect on many of us. For some, it is a diagnosable problem that causes deeper problems than fleeting moments of sadness or malaise.

Seasonal Affective Disorder (aptly shortened to SAD) has symptoms such as a change in eating habits, oversleeping and weight gain. Symptoms can be treated effectively with light boxes that reproduce the sun’s rays but do not allow for any range of motion.

Dutch inventor Toine Schoutens has developed a portable light therapy system called Propeaq that can help mitigate symptoms of SAD. It can also limit the effects of jet lag and help athletes perform at their peak.

How the product works

Propeaq is a portable light therapy system that is built into a pair of glasses. The sunglass-style frames have red and blue LEDs mounted inside them, with interchangeable light blue, dark blue and red lenses.

Wearing the blue lenses with the blue light for about 30 minutes will stimulate your body to be more alert and will provide energy while combating the effects of SAD. The red lenses and LEDs are used for help with falling asleep.

In tandem, the modes can be used to change your sleep patterns to help with jet lag or shift work, and they can help athletes perform at their strongest. The Prepeaq app does not connect to the glasses or control them but helps provide guidance for how to use the glasses while changing time zones or work schedules.

The glasses come with a suite of lenses, and the app is free to download.

The Propeaq glasses are the result of years of research and the use of light therapy in medicine.

Schoutens, a clinical nurse in Holland for more than a decade, became familiar with light therapy to treat seasonal Seasonal Affective Disorder. He saw firsthand how light exposure could change the mood of his patients. Eventually, this led to a move to Amsterdam for more rigorous university-sponsored research; he helped develop light therapy technology for tech giant Philips.

During this time, Schoutens also realized that light can have a great effect on athletic performance. At the 2006 Winter Olympics in Torino, he worked with Dutch athletes to provide light therapy. The  technology was well received but had some problems.

“We worked with light therapy with boxes in those days,” he says. “It was a little clumsy. They are too big and not easy to handle by traveling.

“In 2007, I made my first light therapy glasses. This went into the fridge, more or less. It was too early (for the technology.)”

The glasses were used by students for research but did not gain wider adoption at the time. It was nearly a decade before the glasses re-emerged.

It took a call from the Australian national swim team to re-ignite the development of the Propeaq system. The head coach and fellow Dutchman Jacco Verhaeren had been using light therapy with his athletes but disliked the bulkiness of lightboxes. He approached Schoutens, who offered his glasses.

In 2015, he ramped up development and delivered units to the team before the Olympics in Rio. The Aussies used the glasses in the run-up to and at the Games with rousing success: The team won three gold medals.

Patents were filed for the device very early. Because it was important for Schoutens to protect the technology in his home in Europe as well as in other primary markets, he filed patents in the European Union, Canada, Japan and the United States. This gave him a leg up on any competition; his control of the technology has even led to  deals with other glasses sellers.

Schoutens contracted with a Dutch design firm to finish the development of the product. The style was a key design driver.

“It should look like real sunglasses, because people are used to using (them) instead of outer space-looking frames,” he says.

His design firm also helped him find manufacturing partners. The electronics for Propeaq are made in Holland, so the quality can be monitored closely. The plastic components are made in Asia.

After the success of the Rio Games, enthusiasm for the product has continued to grow. Olympians from more than 10 countries have used the product, including U.S. champion triple-jumper Christian Taylor. Propeaq glasses have also been used by athletes in other professional sports, such as auto racing.

Schoutens is exploring new applications for Propeaq, primarily in the medical arena. Early testing shows positive results for better sleep habits for sufferers of Parkinson’s, Alzheimer’s and dementia, and it could also be a good tool for elderly people.