The GT II is Simply Innovate 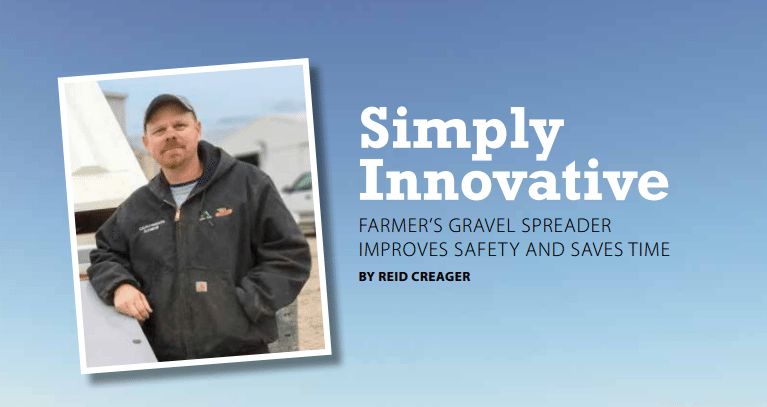 A farmer living near a rural North Dakota town with a total area of one square mile and fewer than 200 residents, Tim Hudson understood what slow was. Now he wanted to figure out a way to make slow work for him. And he wanted to do it fast.

The recent combination of low commodity prices and high input costs (fertilizer, pesticides, etc.) has added to the rugged challenge of farming. Hudson turned to gravel hauling as supplemental
income, only to find he had to pass up some jobs because of the limited ability of his belly dump trailer: The machines generally must reach a speed of 25-30 mph and open their gates in order for the aggregate to spread evenly on the road. But in Colfax—with its gravel streets, farm yards and winding river roads—reaching that speed was often impractical or dangerous.

“There’s kids running around, maybe pets,” said Hudson, owner of TJM Trucking, whose mailing address is 10 miles away in Walcott. “Most of the roads have gravel streets, and the speed limits are low. Even at 30 miles per hour you can be breaking the speed limit and maybe endangering someone.”

Income challenges were growing and other farmers were turning to gravel hauling, making the job more competitive. So he did what was familiar to him. He got busy.

Starting with a toy prototype

In June 2015, Hudson was graveling a road up to a business. “If you want to spread gravel in these belly dump trailers, you have to be traveling a minimum of 20 miles an hour, closer to 30,” he said. “Physics dictated that I couldn’t start out with a load of truck from zero to 20. So later, a friend of mine and I were standing in the family farm shop, staring at the back of the trailer, and my friend said, ‘Have you ever thought about putting a blade on the back?’ I said, ‘I’ll think about it a little bit.’”

Hudson walked into the house and got a toy truck from the basement. “I put a cardboard blade on the back and put a little table salt on the counter (to simulate aggregate) just to see if it was physically possible for the truck to drive through, and it kinda worked. I tend to take the simple approach to things.”

Back in the farm shop the next day, he made a small-scale model. At that point he created a small bench top prototype and provided that—as well as a blade fashioned out of old recycled oil pipeline—to his friend, who owned a small manufacturing company. Together, they affixed the blade to the back of Tim’s trailer.

“Between the two of us, we built the first prototype and tried it—and it didn’t really work that great,” he said with a laugh. “So we tried different settings, different operating systems, hydraulic versus pneumatics, and the one we’re selling today evolved from that.”

Not only could the innovation improve safety via driving at slower speeds, it saved time. Normally, trucks require another machine to smooth gravel roads after dumping, but attaching a spreader eliminates that step.

As Hudson went about his jobs in his newly augmented rig, word spread with the gravel. Customers and other operators asked him where he got the attachment. He began looking into a possible market for his invention.

With the help of his son, Jarrett Hudson, and brother, Dan, the Hudsons began the lengthy process of testing prototypes with the goal of getting a patent. “The original prototype, the GT Spreader, holds a provisional patent application,” Dan Hudson said. “We have been working with our cousin who is a patent attorney and plan on filing our utility patent for the GT II.”

Dan said the original drawings on the provisional application were done by Tim and their first manufacturer, who is also listed on the provisional application. In February, they separated. “We identified issues through our testing, and our manufacturer lacked the technology to make those necessary changes. Some of the issues were that the prototype(s) was unable to hold the blade down with different aggregate or sustain constant steady rear pressure from a bulldozer or pay loader on the push block area due to the improper bracing. Also, the aggregate was bunching
up into the cylinder housing. Tim and I did find a solution for that problem as well.”

That product wasn’t brought to market. “Obviously, Tim and I never wanted to disclose the product until we had one that was thoroughly tested,” Dan said.

“The GT II is the same concept, really, as all the other prototypes that were built; the difference is, we own a trucking company and tested the other models we had built as prototypes,” Dan said.

“The company identified and made necessary design changes—different angles, different air cylinder, leverage points, different gusset and interior bracing design, even a different powder coat process. We conducted over 200 dumps and spreads with the GT II until we were certain it did exactly what we had always hoped it would do. We placed product liability on the GT II and began marketing it to dealers and construction companies. Drawings for the new GT II were done by our new manufacturer’s engineering department.”

Tim Hudson said that when it came to the design changes, “I told them how I wanted it to work and how to look and got their opinion on whether I was on the right track or not. They’re the ones with the computer program who can sit there and make changes on the specs and let me know whether it would work.”

The brothers are the provisional applicants for the accessory adapter plate, which involved some intricate planning and calculations.

“The original provisional for the blade was a direct fit model and did not include an accessory adapter plate,” Dan said. “The original bolted directly on to my brother’s trailer. Instead of having to build a different GT II for each different manufacturer, we developed an adapter plate so that the GT II could be built the same and attach to an adapter, which attaches to whatever make of trailer the GT II may fit. Each manufacturer builds the area where we attach to differently.”

Accessory adapters can be complicated, involving factors that include spring- versus air- ride suspension, weight, height, angle, platform and the amount of rise the trailer has as it unloads the aggregate. The new company developed several models that fit just about any new or used trailer, regardless of manufacturer. Additionally, if a consumer purchases a different trailer, he or she
can simply disconnect the GT II and purchase a different adapter, instead of having to buy a brand-new GT II. The spreader can be swapped out from trailer to trailer with just the purchase of a new adapter plate.

Because of its design, the GT II Spreader also is a functional bumper when retracted that provides rear impact protection. Also, the spreader doesn’t add a significant amount of weight, meaning the operator doesn’t have to haul less aggregate.

The process involves the simple removal of an existing push block and putting another in its place.

The GT II with adapter plate weighs about 550 lbs. Each spreader is made in Jamestown with 100 percent American parts. The price ranges from $6,000 to $7,000. Inventory has sold out since May; after a torrid start to the season, sales are “still steady,” Tim said.

Tim and the current company handled all design elements for the GT II. Dan manages aspects of the invention including financial, website design (mygtspreader.com), marketing, manufacturing and distribution. Jarrett handles sales, product education, is a liaison, and is also a belly dump operator who farms with his father. Tim’s and Dan’s parents, Gary and Linda Hudson, market the GT II from their home in Arizona.

Despite the popular notion that family members shouldn’t be in business together, Tim said it hasn’t been a problem. “This has actually facilitated our getting closer as a family—learning how to work together, learning how to work through disagreements. At the end of the day, the family part is the most important part.”

More than gravel may be up the road. Tim said his invention may be able to do other jobs, such as spreading blacktop: “We’re feeling it out as we go along.”

Said Dan: “Based on all of the testing, we knew it would cost us a great deal of time and money to build the GT II the way we needed to, but it was worth every hour, swear word and penny.”