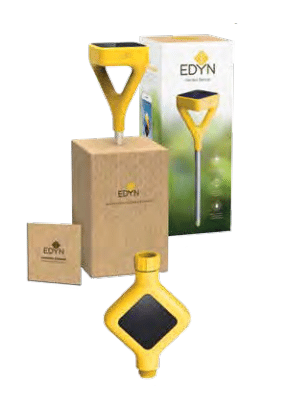 Garden watering product a boon for plants and conservation.

Jason Aramburu was working in East Africa when he came up with his idea for gardens of Edyn. While studying soil additives for the first company he founded, re:char—on a project that was funded by the Bill and Melinda Gates Foundation—he needed a way to accurately monitor the moisture of the soil on the vegetable farms where he worked.

He looked into commercially available moisture monitors but was not satisfied with the results. “They were really expensive and didn’t really meet our needs,” recalls Aramburu, who holds a degree in ecology and evolutionary biology from Princeton University. “That is what inspired me to develop our own.”

Also realizing that gardens are consistently overwatered or underwatered, he created the Edyn garden monitor and smart watering system to keep plants growing their best while helping to conserve water.

The system consists of a sensor unit and a smart water valve. The sensor is inserted into the soil and measures the moisture and nutrients in the bed, as well as the humidity and the light level. The sensor sends data to a smart phone and can be used as a standalone device to monitor garden conditions. The app can even suggest plants that grow optimally in your conditions.

When paired with the smart valve, the sensor can trigger watering based on soil moisture to keep a garden properly hydrated without wasting water. Both the sensor and the valve have solar panels to charge the batteries inside each unit, so there is no worry about losing the charge.

Building Prototypes
With help from his experience in programming, Aramburu built the first prototype moisture sensor while he was still in East Africa with an Arduino (an open-source electronics prototyping platform based on easy-to-use hardware and software), copper tubing and sheets of plastic. He did not have an app yet, so he uploaded data from the sensor to a website and was able to collect the data he needed.

When his project in East Africa ended, he continued working on Edyn stateside. He filed a provisional patent for the technology while continuing development of the sensor.

Based on lessons learned from starting Re:Char, Aramburu knew he had to build a great team to develop the best product. He partnered with the design firm fuseproject, led by award-winning industrial designer Yves Behar. Fuseproject invested in the idea and worked with Aramburu to design and prototype the device.

In just a few months, they had better prototypes and started testing with gardeners in the San Francisco area. The smart valve add-on was conceived during this testing. “We realized that irrigation automation was important to (consumers). Data alone was not sufficient,” Aramburu says. So the valve and sensor were developed in tandem to be a full system.

Kickstarter Boost
Development continued at breakneck speed. In roughly six months, the system had an iconic design and solar power that would keep the units functioning for 30 days without light. The units were outfitted with Wi-Fi connectivity to transmit data from the sensor for long distances, and an app was built to display the data.

The Edyn system was launched to the world on Kickstarter in 2014, and the campaign finished with $384,201 and 2,336 backers. Although the funds were a boost, Arambulu was more concerned about getting user feedback. He used the campaign as a type of beta test to see how users would react to the technology and which features they would like. Based on feedback from the campaign, the app was enhanced significantly.

Arambulu aggregated a group of PhD scientists to build a proprietary database for matching plants to the conditions of the end-users’ gardens. The Kickstarter campaign also caught the interest of big-box retailer Home Depot, which showed interest in purchasing the product for sale in their stores. The purchase orders also provided a financial boost to the company, as well as a clear path to a retail setting.

The next step was getting a manufacturing partner. Arambulu was interested in manufacturing in the states but was concerned about costs. He turned his attention to overseas vendors and did most of the sourcing research on his own. It was a challenge to find a factory that had the capabilities to complete the task while still being small enough for Edyn to be a priority customer. After narrowing the field to a short list, he traveled to each of the factories for an audit. The research has paid off, as there have been no major issues in production quality or delivery with his Chinese vendor.

Enthusiasm and distribution for Edyn continue to grow. The system is now also available on Amazon and Gardener Supply. Edyn was even installed in the organic gardens at the Googleplex in Mountain View, California, to control the watering for its farm-to-table program.

The app continues to get periodic updates to make it more user friendly and smart. Arambulu is also adding integration to smart home platforms starting with IFTTT, one of the biggest smart home platforms. Edyn’s added convenience and water savings may make it the next must-have item for serious and novice gardeners.