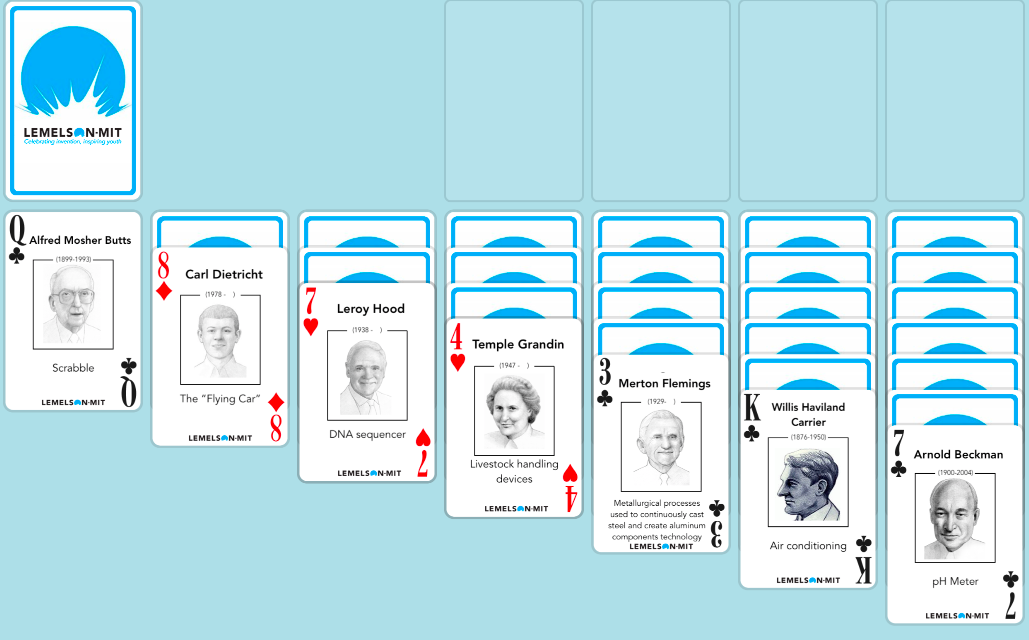 No one knows for sure who invented the card game solitaire—or even when, for that matter. But everyone knows that a solitaire game with inventor cards is a great idea.

That’s the product of Solitaired.com and the Lemelson-MIT Program, which has partnered to highlight famous inventors and promote inventive thinking.

Solitaired Outreach Manager Philip Hargrove said the computer game was created “as a way to help inspire students who enjoy playing games and also help them learn about inspiring inventors.”

Each playing card features an inventor and one of his or her notable inventions. The name of the inventor is at the top of each card; students can hold their hands over the bottom of the cards to test themselves on what each person’s invention was.

“We tried to go for a blend between the very famous to the lesser known yet equally important,” Hargrove said.

Jonas Salk (polio vaccine), James Naismith (basketball) and George Washington Carver (peanut butter products) might be some of the easier ones. But the deck avoids obvious inventors such as Thomas Edison and Benjamin Frankin, perhaps in an attempt to enlighten players about other inventors and their accomplishments.

It’s fitting that Alexander Cartwright is featured on the ace of diamonds. According to Lemleson-MIT, he established the modern baseball field (or diamond) in 1845.

But why is Paul Winchell, inventor of the artificial heart, the king of spades? And why is glamour actress/spread communications co-inventor Hedy Lamarr the king of hearts and not the queen of hearts? All part of the fun.

(By the way: PlaySolitaire.org says card Solitaire began in the 18th century in the Baltic area of Europe, perhaps as a type of fortune telling. JustSolitaire.com says Solitaire made it earliest appearance in writing in around 1783, when it is described in a German book of games.

The term is derived from the French word solitaire, meaning alone or lonely. The game is often called Patience, especially in Britain.)

To play, go to solitaired.com/solitaire/lemelson-mit.