A Sport with 2 Peach Baskets? Madness! 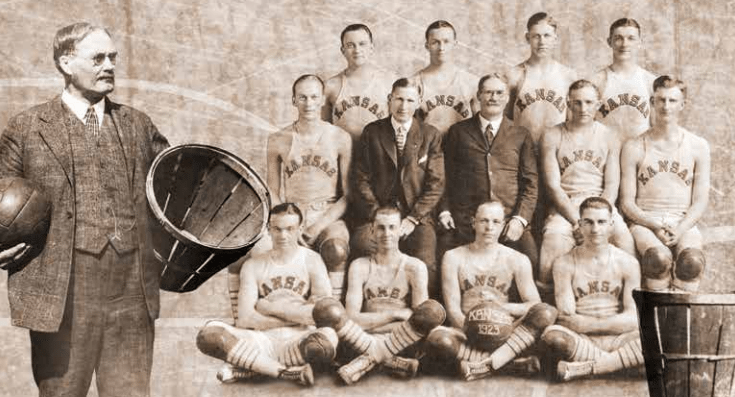 The sporting event that transfixes millions of Americans every March is the result of a game invented by a native Canadian who preferred wrestling and gymnastics.

James Naismith would probably be surprised by the popularity of the NCAA men’s basketball tournament long known as March Madness, or that the championship game attracted nearly 18 million viewers last year. He certainly could not have foreseen that journalists would be writing about the sport just a year after he invented “basket ball” in 1891.

The physical education instructor at the YMCA in Springfield, Massachusetts, Naismith was tasked with conceiving a safe and healthful exercise that could take place indoors during the Northeast’s often brutal winters. His idea: two teams of nine players apiece who tried to throw a soccer ball into two peach baskets nailed to a 10-foot elevated track. On Dec. 21, 1891, he pinned its 13 basic rules outside the gymnasium, with a heavy emphasis on safety and sportsmanship (five of the rules mention fouls).

“Basketball doesn’t build character; it reveals it,” Naismith said. “Be strong in body, clean in mind, lofty in ideals.”

Those enduring principles and the rules’ eternal impact on the game were dramatically illustrated in 2010, when University of Kansas alumnus David Booth paid $4.3 million for the original rules in an auction conducted by Sotheby’s in New York City. The rules, sold by the Naismith International Basketball Foundation, surpassed the $3.7 million figure at the same auction for a copy of the Emancipation Proclamation that was signed by Abraham Lincoln and purchased by Robert Kennedy.

Orphaned at age 9 and raised by his uncle, Naismith was active in football, soccer, lacrosse, rugby and gymnastics at McGill University in Montreal. He served as director of athletics there and earned a bachelor’s degree in physical education.

Naismith was 28 when he went to teach at YMCA International Training College in Springfield. In the winter of 1891, “We had a real New England blizzard,” Naismith said in a 1939 radio broadcast discovered by the University of Kansas, where he established the first basketball program. “For days, the students couldn’t go outdoors so they began roughhousing in the halls. We tried everything to keep them quiet. We tried playing a modified form of football in the gymnasium, but they got bored with that. Something had to be done.

“One day, I had an idea. I called the boys to the gym, divided them up into teams of nine and gave them an old soccer ball. I showed them two peach baskets I had nailed up at each end of the gym, and I told them the idea was to throw the ball into the opposing team’s peach basket. I blew a whistle, and the first game of basketball began.”

Naismith quickly learned that this wasn’t the game he had in mind. There weren’t enough rules. “That’s where I made my big mistake,” he said. “The boys began tackling, kicking and punching in the clinches. They ended up in a free-for-all in the middle of the gym floor. Before I could pull them apart, one boy was knocked out, several of them with black eyes, and one had a dislocated shoulder. It certainly was murder.

“Well, after that first match, I was afraid they’d kill each other. But they kept nagging me to let them play again, so I made up some more rules (the 13 that are now famous). The most important one was that there should be no running with the ball. That stopped tackling and slugging. We tried out the game with those rules and we didn’t have one casualty. We had a fine, clean sport. Ten years later, basketball was being played all over the country.”

Though Naismith is universally known as the inventor of basketball, his breakthrough wasn’t an invention in the formal sense because his idea for the game has no patent (U.S. Patent 1,718,305 was granted to G.L. Pierce on June 25, 1929 for the basketball used in the game). But his creation fit the classic invention model to a T: He identified a need, conceived a plan, provided the basic elements, and made the necessary refinements. “The invention of basketball was not an accident,” the quotable Naismith said. “It was developed to meet a need. Those boys simply would not play ‘Drop the Handkerchief.’”

It may not be a stretch to say that Naismith had more of an impact on both basketball and football than anyone. In addition to being the unquestioned inventor of basketball, he is also credited with designing the first football helmet.

But he will forever be most associated with basketball. At the 1936 Summer Olympic Games, three years before Naismith died, basketball was included in the competition for the first time. Naismith went to Berlin to present medals to the winning teams of the three North American countries: the United States (gold), Canada (silver) and Mexico (bronze). He was named honorary president of the International Basketball Federation.

“And the whole thing started with a couple of peach baskets I put up in a little gym 48 years ago,” he said in the broadcast interview 10 months before his passing. “I guess it just goes to show what you can do if you have to.”