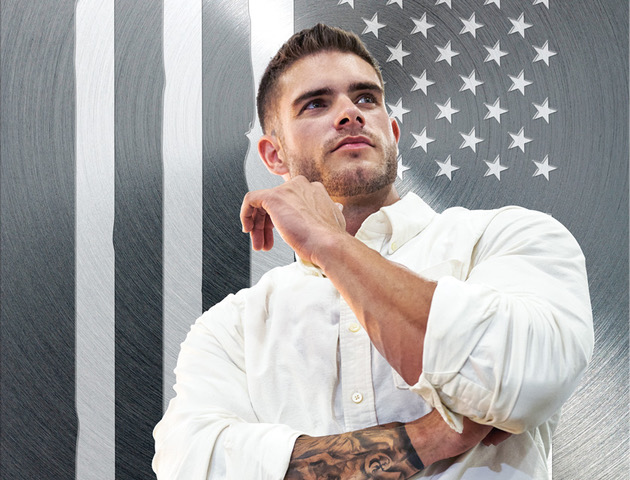 Colin Wayne’s memory of May 3, 2012, is in vividly clear contrast to the hanging veil of hazy smoke captured on a grainy video that day.

“I was working out in the gym on base—in the Paktika Province—in Afghanistan when a 107mm rocket exploded three feet away from me,” he told Inventors Digest. “Between the ensuing gunfire and my eventual rescue, I was initially in such utter shock by the explosion that I couldn’t really feel any pain nor process what had just transpired.”

The explosion left the staff sergeant with a lumbar contusion in his back, permanent tinnitus in his left ear, and injuries to his arms, stomach, and right leg from shrapnel wounds. He suffered severe nerve and brain damage.

Wayne was medically evacuated twice before returning home to undergo rehabilitation and complete an arduous six months of physical therapy.

Even at 22, the strapping Huntsville, Alabama, native showed no fear in the face of major challenges. He already had his share.

Wayne dropped out of school at 16. The military was in his blood; his grandparents served. So had his older brother. On Sept. 26, 2006, he officially joined the U.S. Army a month after turning 17.

His decision had nothing to do with having the Army help pay for college or a lack of other options. He viewed service to his country as crucial to his development as a person.

Today, Wayne ticks off just some of the core values from the military that were instrumental in his personal and professional growth as the founder of a $100 million home décor/wall art company called Redline Steel—the fourth-fastest-growing manufacturing company in America: Integrity. Selfless service. Loyalty. Duty. Honor. Perseverance.

He served with distinction in all three of his tours: Operation Bright Star in Cairo, Egypt, in 2008; Operation Iraqi Freedom, 2009-10; and Operation Enduring Freedom in Afghanistan in 2012.

Danger was omnipresent, especially during his last two tours. Wayne smiles and shrugs about that now: “I’ve always done better under pressure.”

He began his military career as a military police officer and worked his way up the ladder, eventually getting pinned as staff sergeant and becoming the youngest in the brigade to earn the honor.

Blasted, saved in the gym

Wayne has recounted the events of May 3, 2012, to numerous media outlets with unwavering clarity and big-picture optimism.

“When you can look death in the face, you can appreciate life much more,” he said—although he still feels like he has Post-Traumatic Stress Disorder at times.

He finds particular irony in the fact that he was working out in a gym at the time of the explosion, and that his workout regimen ultimately helped land him a lucrative career as a fitness model. “The gym almost killed me, but it also saved my life.”

Although he played many sports while growing up, Wayne was small. When he enlisted in 2006, he weighed 145 lbs. His long desire to be bigger and stronger grew with the physical demands of the military, and he began working out regularly in 2009.

Less than 18 months after his near-fatal injuries in Afghanistan, Wayne landed his first magazine cover on Ironman Australia.

He ended up on more than 50 magazine covers worldwide—making $30,000 to $40,000 a month—before scratching the itch to start his own business.

That new chapter began with a chance meeting and an unwelcome plot twist at the end—an ending that Wayne turned into a beginning through determination and hard work.

“I started out as a customer after coming across a local business that manufactured steel art when searching for a customized baseball gift for my son Carsyn’s birthday,” he said. “When I initially reached out to inquire about current lead times and availability, I was told 8 to 10 weeks due to the holidays.

“However, 15 minutes later, the owner reached back out to me and said he had no idea it was Colin Wayne and that he could get my order completed that same week, ending the conversation by stating, ‘I would love to be at your level one day.’”

Wayne eventually contacted the owner and requested a consulting meeting. After about a month, he sent an official proposal offer to become a partner, “to which we verbally came to terms.

“However, on the day we were supposed to sign all the legal documents with the attorneys, he got cold feet and backed out entirely. Although I was frustrated with his decision, I told him I completely understood his decision, but that I would proceed ahead on my own and rather than becoming business partners we would become direct competitors.

“Without any equipment, nor a building or a background in manufacturing, the very next day I purchased my first CNC plasma machine (a system in which a machine carries a plasma torch that can move that torch in a path directed by a computer) and the rest is history!”

When talking with Wayne, it’s immediately clear that he didn’t drop out of high school due to a lack of intelligence. He discusses complex personal growth and business concepts with ease—he’s a proponent of the positive-energy Law of Manifestation—and spews out numeric business targets and accomplishments like a computer.

So it may not surprise you that when he started his business on Jan. 6, 2016, he basically did it on his own. He built the early foundation with the help of YouTube videos.

“I remember powder coating out of a homemade kitchen oven;” he said in a promotional video. “We powder-coated hot-rolled sheets of steel together. We had a door where we literally pushed it up against it, and installation all along the outside. It looked horrible.

“With 24-inch parts, we had to lift it out, flip the piece, put it back in the oven, and it would be done baking—in about three hours. It was ridiculous.”

But the company stayed loyal to its mission and a product it knew had demand. Redline Steel filled its 100,000th order a little over a year after opening.

Now the warehouse has more than 110,000 square feet. The company has 100 employees and more than 1 million customers.

Innovative, high-quality product is the core of the company’s success. Wayne is not ashamed to say that he gets a lot of innovation inspiration from customers: “We’re not afraid to ask them what they want to see.”

The product, much of it wall décor, is elegant yet whimsical; strong yet sensitive; and always with positive messages. Patriotic themes abound.

The company continues its robust growth—“with no patents at the moment, but a couple different trademarks,” Wayne says—via consistent, traditional, progressive and integrity-driven processes:

Because Redline Steel is a direct-to-customer-driven e-commerce business, the COVID-19 pandemic has not been a significant factor. “We thrived as a business” in 2020, Wayne said, “allowing us to avoid lay-offs while additionally hiring dozens of full-time employees and helping to stimulate our local economy in Huntsville.”

A lesson and a message

Even the occasional failure is seen as a growth opportunity. In 2018, a vital machine went down at the factory, leading to many customers not getting Christmas gifts on time.

Reaction was strong and sometimes severe, resulting in bad press and even coverage from a local TV station.

“I’m upset with myself because we didn’t get this out,” Wayne said in the TV interview. “We made a promise to these customers. I wasn’t able to deliver. … This is a massive learning lesson for us at Redline.”

Wayne hired more people and extended hours to combat the issue, even emailing customers in advance to let them know their orders would not be arriving on time and offering them refunds.

“I looked like the Grinch,” he said later. But his mantra remains: “I want my failures and painful moments to fuel me, not beat me.”

That experience underscores Wayne’s message for prospective inventors about positivity and perseverance.

“Anyone can have a multi-million-dollar idea, but without the proper planning, execution, self-confidence and a relentless drive, you’ll be stuck at the idea stage,” he said. “The biggest deterrent in achieving your full potential is your own inner critic.

“Don’t be discouraged if your plan gets declined or denied. Continue to be persistent and don’t settle based on someone else’s opinion. Your drive and persistence is key in avoiding complacency.”

Favorite movie: Anything with Adam Sandler or Jim Carrey

Favorite quote: “Lead from the front.”