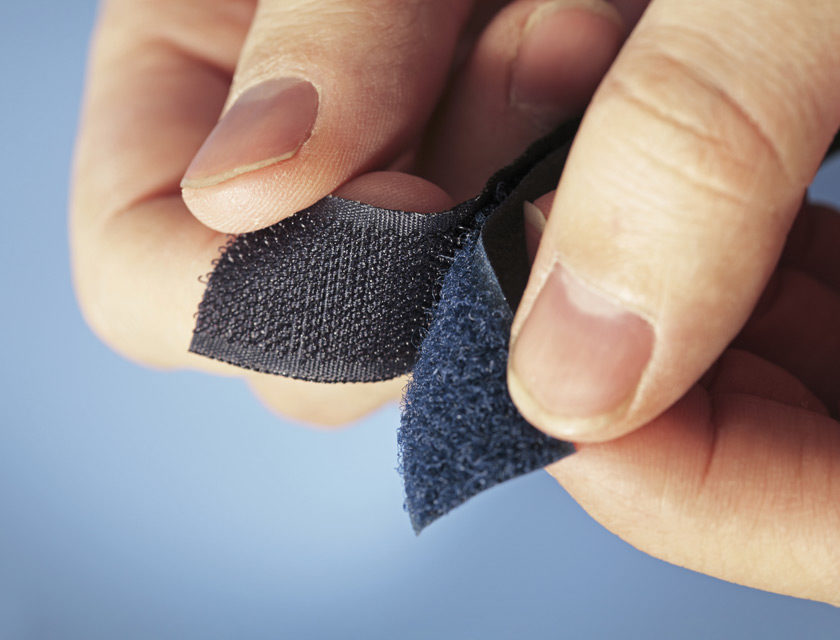 On the 80th anniversary of its initial idea, Velcro still has holding power

When Swiss electrical engineer George de Mestral noticed burrs stuck on his dog’s coat, he imagined a practical application for a similar concept.

If you witnessed the crazy-cuckoo self-propelled flight on “Late Night With David Letterman” on Feb. 28, 1984, the image won’t let go.

Letterman began the segment affixed a few feet high against a flat wall full of the ubiquitous hook-and-loop fastening product known as Velcro®. His spacesuit-like outfit, covered in extra-strength Velcro, kept him in place.

He was helped down off the wall and got a brief demonstration from a Velcro representative regarding the product’s many uses.  Letterman also caught a Velcro basketball. With his chest.

The final demonstration became one of the iconic moments in the show’s history. A small trampoline was placed in front of the large Velcro wall.

Letterman got a running start, jumped on the trampoline, sprung into the air toward the wall—and stuck face first against it, hands stretched above his head, as the audience roared.

This unforgettable demonstration of Velcro’s holding power (a YouTube classic) was a long way from a man walking in the woods with his dog.

That’s what George de Mestral, a Swiss electrical engineer, had done during a skiing trip when he conceived his invention in 1941. Technically, the burrs that stuck to his dog’s coat were nature’s invention; de Mestral wondered if he could adapt it to develop a practical use for it.

He examined a burr under a microscope and observed that each was covered with hooks that grabbed onto anything with a loop—such as fur, human hair, or clothing fiber.

De Mestral got a Swiss and U.S. patent in 1955, and opened a Velcro USA plant in Manchester, New Hampshire, in 1957. It’s still there.

One of his product’s most visible uses came in the early Sixties, when NASA astronauts used it to keep food packets, equipment and other items from floating away. But de Mestral’s larger plan to see Velcro become a clothing mainstay—a ”zipperless zipper”—flopped in more ways than one.

Detractors perceived Velcro as ugly. Some said it didn’t stick long enough. Others complained it makes too loud of a ripping sound when removed.

In fact, Velcro’s patent expired in on April 2, 1978. Velcro USA got busy improving its product and raising its profile, highlighted by the Letterman stunt.

The company got another shot in the arm when the U.S. Army added Velcro to its uniforms in 2004, according to Time magazine, But that only lasted six years: The product’s little loops became clogged from dust in the deserts of Iraq and Afghanistan, and soldiers didn’t like the ripping noise they made in places where quiet was rather essential.

Companies including 3M Corp. and Japan-based YKK have become competitors with similar hook-and-loop fasteners. They aren’t rip-offs (sorry, couldn’t resist) because of the expired patent, but they can’t be called Velcro because that name is trademarked.

In 2017, the company launched a campaign to remind the public about its trademark rights, especially when competitors’ products are mistakenly called Velcro. A group of attorneys singing in a creatively outrageous original music video called “We ® the World” pleaded:  “Don’t just say Velcro. You call it Velcro, but I’m begging you, this is a *bleeping* hook-and-loop.”

Velcro remains a consistent force in medical markets (blood pressure cuffs, hospital gowns) kids’ shoes (no more shoestrings), and has numerous uses around the house and in the car.

But let’s get back to the fun stuff.

Should Letterman be credited as the inventor of Velcro jumping? Not long after his flying leap, the practice caught on with amusement companies and bars throughout the world. Sports Illustrated published a story on it in 1991.

We can’t endorse Velcro jumping, because a wall or suit sans sufficient hook-and-loop fasteners could prove hazardous to your health. Or, per Letterman’s most famous quote: “For the love of God, folks, don’t try this at home.”