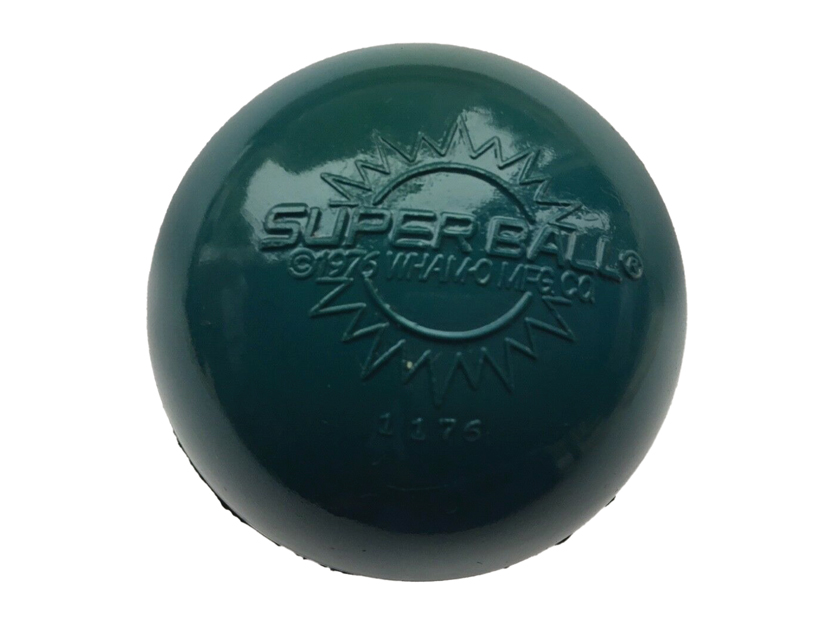 Made by accident, the Super Ball was an unlikely cultural phenomenon in the 1960s

Bettis Rubber Co. didn’t want Norman Stingley’s invention. It said the compound polymer inside the ball was too unstable.

Norman Stingley, a chemical engineer working for Bettis Rubber Co. in Whittier, California, in 1964, was experimenting in his spare time when he accidentally created a goopy, rubberlike substance and compressed it under 3,500 pounds of pressure. Before long, he had a dense, compact synthetic rubber ball with bounce that seemed otherworldly.

Stingley offered his invention to his employer in 1965—the same year that a girl named Joanne Rowling was born in Yate, United Kingdom. Rowling grew up to be an author whose “Harry Potter” book idea was rejected by 12 different publishers; Bettis Rubber was about to make a similar mistake decades earlier.

The compound polymer inside the ball was too unstable, Bettis officials said. It would break too easily.

So Stingley took his invention to Wham-O, the toy company already famous for the Hula Hoop and Frisbee. Wham-O said it would play ball if Stingley could make his compound more durable, and sent him back to his lab.

Several weeks later, the chemist came up with what he felt was the perfect formula. According to How Stuff Works, “It called for just the right ingredients, as well as the right temperature and pressure. It also required a certain shape—a sphere of about 2 inches (5.08 centimeters) in diameter—for the process to work effectively.”

It certainly worked well enough for kids and kids at heart—including this writer—who went boingy boingy over the boingy boingy when it screamed into stores in ’65.

Stingley called the proprietary material inside the ball Zectron, a space age-sounding name.

The material was actually a hard synthetic rubber called polybutadiene, used especially in the manufacture of tires. Science authors Martin R. Farrall and Alastair J. Cochran wrote that the balls also were made of hydrated silica, zinc oxide, stearic acid, and other ingredients vulcanized with sulfur at a temperature of 165 degrees Celsius and at a pressure of 3,500 pounds per square inch.

Wham-O marketed the toy as the Super Ball, “made from amazing Zectron,” and sat back as the generic-looking spheres became a cultural phenomenon and cash cow the public could not stop milking.

Wham-O said the ball was capable of bouncing back to 92 percent of the height from which it was originally dropped. With a decent amount of force, a ball could easily be bounced into pavement and fly a hundred feet in the air or more.

Time magazine, which includes the Super Ball in its all-TIME greatest toys list, chronicled the craze in 1965:

“A dark purple sphere about the size of a plum, Super Ball has already bounced into millions of U.S. homes, (and) shows no signs of slowing down. McGeorge Bundy (national security adviser to President Lyndon B. Johnson) bounces Super Balls in his Washington basement, brokers on the Pacific Coast Stock Exchange throw them about the floor during slack hours, Manhattan executives dribble them on their desks, and kids around the country are bouncing them down sidewalks and school corridors.”

(My Super Balls were coal black. And despite the supposed durability improvements Stingley made, they would eventually end up broken in half, revealing a jagged rubber core that looked like some kind of extraterrestrial surface.)

At the peak of sales, about 170,000 balls were manufactured daily. Wham-O estimates it sold more than 20 million Super Balls, with an original price of 98 cents, between 1965 and 1970. Within a year or two, miniature versions were sold in gumball machines for a quarter.

Renowned for its marketing genius, Wham-O conducted promotional stunts to keep the toy in the public eye. A Super Ball about the size of a bowling ball was dropped from the 23rd floor of an Australian hotel; on its second bounce, the ball landed on the roof of a parked convertible and destroyed it.

By the early 1970s, imitation super-bouncers under various names and crazy colors flooded the market. The Super Ball frenzy lost its spring, even though the imposters did not hold quite the same hop.

Wham-O revived the toy in the late 1970s and again in 1998. The curse of ubiquity was cemented by then.

Nonetheless, Stingley had long since become a very rich man. Little is publicly reported about him, other than the fact that he used his windfall to open a rubber products manufacturing plant in Madera, California, in February 1968.

It isn’t easy to find an original Super Ball these days. A recent check on eBay showed that an item billed as an original 1960s Wham-O Super Ball, which sold for $29, had a 1976 copyright on the ball. Oops.

Phonetics and ‘The Big One’

The Super Ball has a prominent place in pop culture history for another reason: Legend has it that it was the impetus for the term “Super Bowl.”

When the National Football League and American Football League were discussing a merger and a championship game between the two leagues in the late 1960s, the owners struggled to come up with a name for the NFL-AFL title game.

NFL Commissioner Pete Rozelle suggested the generic “The Big One,” which never caught on. “The World Series of Football”? Too much like baseball’s fall showcase.

“My own feeling is that it probably registered in my head because my daughter, Sharron, and my son, Lamar Jr., had a children’s toy called a Super Ball and I probably interchanged the phonetics of ‘bowl’ and ‘ball,’” Hunt told the New York Times in 1986.

The first two title games in 1967 and 1968 were called “The AFL-NFL World Championship Game”—a decidedly uninventive mouthful that needed updating. As the media got wind of Hunt’s suggestion, it eventually took hold and became the official name of the third championship game between the leagues in 1969.

In part, the description reads: “This invention relates to a toy and more particularly to a ball or sphere having extremely high resilience and a high coeflicient of friction.”