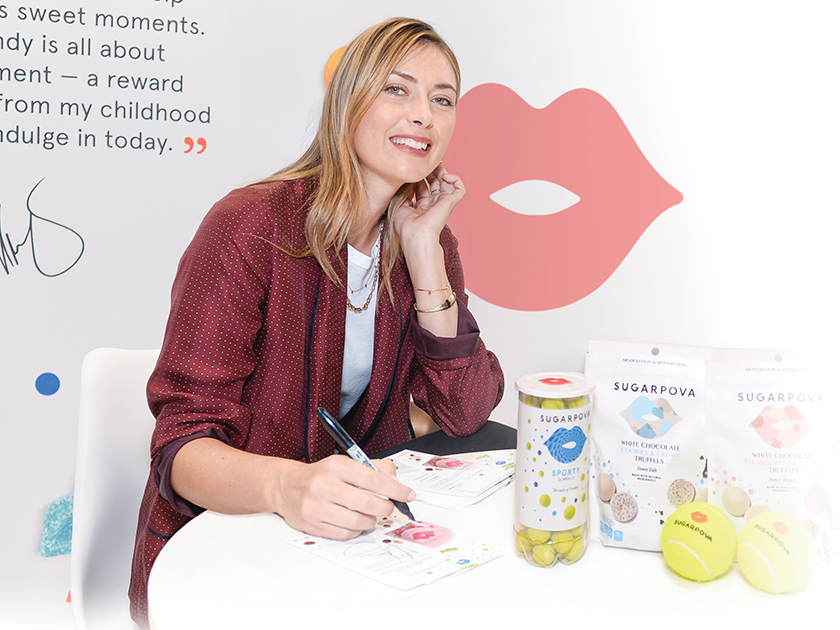 “I have had a huge sweet tooth since I was very young … after doing some research on the candy business myself, Sugarpova felt like a no-brainer.”

The top-ranked female tennis player in the world on five separate occasions, Maria Sharapova is beautiful, elegant, and willing to do the grunt work.

Her consuming passion for business’s intricate details has paid off with Sugarpova, the candy company she launched in 2012. Sharapova’s $500,000 investment became a business worth a reported $20 million last year.

“I still love to be involved in all the details of Sugarpova, whether that’s taste-testing new flavors or designing the packaging for new product lines,” she told Inventors Digest.

“I work directly with my Sugarpova team on every decision, from ingredient selection to manufacturing partners to everything in between. I won’t lie, it’s not easy balancing everything with my hectic tennis schedule, but it’s so rewarding to see the tangible results—especially when fans share how much they enjoy the taste of our candy.”

The unlikely notion of a slim, finely toned athlete starting a candy line is a tribute to Sharapova’s innovative spirit. She traces her business to a habit she developed as a child in her native Russia.

“I have had a huge sweet tooth since I was very young, when I’d often reward a hard day of training with something sweet,” she said. “And after doing some research on the candy business myself, Sugarpova felt like a no-brainer.

“I worked with my longtime agent, Max Eisenbud, to find the right manufacturing and retail partners and funded the company completely myself to get started. Something I’ve learned throughout my tennis career is the importance of building a strong team around you, and I’m lucky to have such great partners who help keep all the pieces moving.”

A portion of all Sugarpova proceeds goes to the Maria Sharapova Foundation, her charity.

The mainstream media often focuses on Sharapova’s trademark grunt/scream as she attacks the tennis ball. (“I sound like an injured bird,” she has said.) Her more important legacy on the court stems from her five Grand Slam titles; being the only Russian woman to hold a career Grand Slam (winning Wimbledon, the U.S. Open, French Open and Australian Open); and winning a silver Olympic medal in singles at the 2012 Summer Games in London.

Sharapova has made nearly $300 million in prize money, appearances and endorsements since she turned pro in 2001.

Every grunt and success reflect a lifelong competitiveness that assumes nothing, even with each victory on and off the court. Her business strategy has been strongly shaped by her “humble beginnings” in Russia; she came to the United States in 1994 with $700.

“I see my business as a starting point—as if I have nothing,” she told CNBC last year.

Starting from scratch in the food business was a challenge, but she would rather talk about what she saw as benefits. “I was able to approach product development almost as a consumer,” she told Inventors Digest. “I’ve always taken opportunities while traveling for tennis to try new sweets from around the world.

“When we first came up with the idea for Sugarpova, I thought about some of my own favorite candies—the flavors, the shapes, the packaging that drew me to them. That’s how we selected our manufacturing and other partners.”

According to Eisenbud, Sharapova’s agent, the product name came suddenly from longtime candy industry fixture Jeff Rubin when he and Rubin had lunch. Sharapova, obsessed with quality, found a gummy bear that she said had the best taste of any candy she had tasted. She tracked it to a factory in Spain.

Next came the candy’s lip shapes, which Sharapova said was “genius and something you could have for so many different flavors.” In fact, that lip shape is trademarked (Registration No. 4408651, in 2013). Sunburst, purse and high heel shapes—as well as tennis balls—followed. Fun names for the original 12 flavors included Flashy, Flirty, Spooky, Cheeky and Smitten.

A keen student of branding’s importance, Sharapova was determined to see that Sugarpova’s packaging married fun with elegance. “Packaging and design have been a priority of mine since Day 1 of Sugarpova,” she said.

“My vision for the company was to create something that people would see on shelves and immediately think of a luxurious treat, but at an affordable price point. To me, our branding and packaging make a beautiful presentation that you want to share or gift while still remaining accessible for anyone who wants to indulge.”

As sales soared, Sharapova and her team leveraged the universal appeal of chocolate by introducing it to the line in May 2016.

“Given the success of our gummies during the first few years, we wanted to further expand our sweets offerings and chocolate was a natural next step,” she said. “I particularly enjoyed perfecting the mold for my chocolate bars, which are marked with a small lip shape on each square of chocolate. The execution of that lip shape took time to complete because they require a more complicated manufacturing process.”

Sharapova had long studied the branding practices of chocolate rivals: “The matte white packaging was intended to create a clean aesthetic amongst busy branding that you often see in the sweets section.”

Seven years in, there is no sign that the company’s momentum is ebbing. The past year has been particularly newsworthy for the brand.

Last August, Sugarpova announced that the brand was partnering with travel retailer Hudson Group and Los Angeles-based luxury hotel group SBE, putting the candies into hotels and airports in 22 countries.

“We’re constantly thinking about new ways to share Sugarpova with fans all over the world,” Sharapova said. “In addition to our partnership with Hudson News, we are excited to announce further global retail expansion this summer.”

That will add to what has already been an innovatively successful 2019.

Sharapova said this is “one of Sugarpova’s biggest years yet. We’re both expanding in terms of product to offer even more sweet options and growing to new retail markets as well.”

One of the highlights of the new offerings stems from her studying candy market trends, which include an emphasis on health and wellness.

“We recently unveiled a new line of gummies made entirely from all-natural ingredients at the Sweets & Snacks Expo in May, replacing these with natural ingredients like cane sugar, fruit, vegetable and other plant extracts like sunflower oil. I’m also excited to share these because they’ve been long in the making. We tested new formulations for 18 months to ensure we were using the highest-quality ingredients that also tasted amazing.”

Meanwhile, objective analyses envision the brand as a major force in the market for years to come. A May 10 report by HTF Market Intelligence forecasted that the dark chocolate market will witness massive growth by 2023 and listed Sugarpova as one of the key players.

2019 could be a pivotal year for Sharapova on the court, too. Idle since January following shoulder surgery, she was scheduled to return for the Mallorca Open in mid-June. She gives no timetable for retirement but says when it happens, a Sugarpova 2.0 is a distinct possibility.