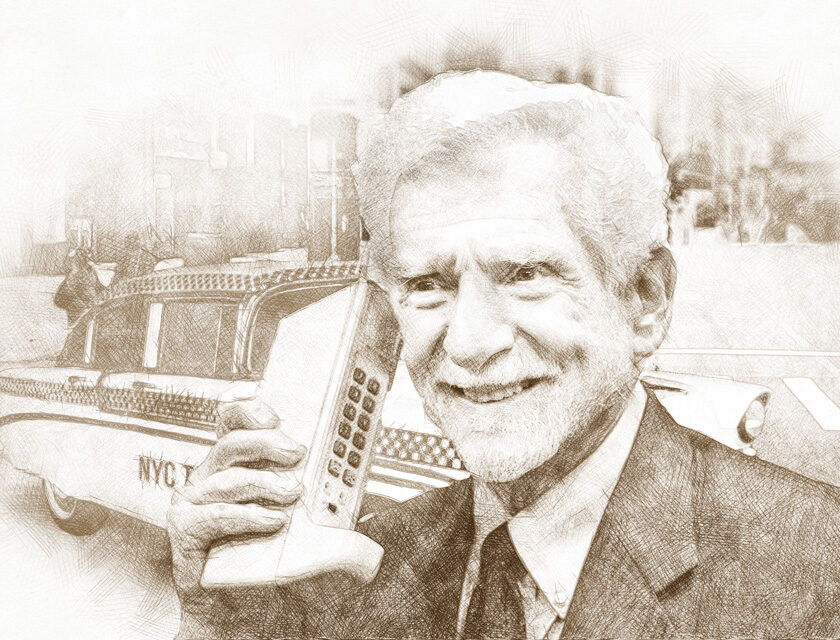 Many times, Marty Cooper has told the story of making the first portable cellphone call. But he seldom mentions the part about how he was so excited that it nearly got him killed.

April 3, 1973. The U.S. Supreme Court’s decision in Roe v. Wade was 10 weeks old, and the Watergate hearings were a little over a month away when Cooper began walking with a reporter outside the New York Hilton along 6th Avenue.

“I desperately wanted to demonstrate the freedom that results when the telephone wire is dispensed with, so I insisted that we keep walking as I described the phone and system,” Cooper told Inventors Digest last month. “Fortunately for me, the reporter was a native New Yorker who was savvy enough to yank me out of the path of a taxi, which would certainly have killed me otherwise.

“The importance of that incident became evident in ensuing years because it permanently seared the experience into my mind. I had no idea that the demo would have historical significance many years later; it was merely the first of many demonstrations of that phone.”

That historic phone call at 6th and 52nd proved a double thrill for the then-44-year-old Cooper, an engineer at Motorola in the fledgling wireless communications industry. Motorola and communications superpower AT&T were rivals in that fiercely competitive sector.

In fact, in 1946 AT&T introduced the mobile telephone. But only 11 or 12 channels were available in a given area, and the large amount of power needed to drive them could only be supplied by a car battery. In other words, they were car phones.

Cooper once told “60 Minutes” that AT&T was “the elephant” and Motorola “the fly.” So that early spring afternoon belonged to the fly.  Cooper, who once led Motorola’s car phone division, was going to revel in the buzz.

Shortly after nearly becoming the latest New York City traffic casualty, he had the presence of mind to make the historic call to friend and rival Joel Engel at AT&T. He dialed him up on his handheld, blocklike contraption that resembled Maxwell Smart’s shoephone from the TV show “Get Smart.”

“I said, ‘Joel, this is Marty Cooper,’ and he says ‘Hi,’” he told “60 Minutes’” Morley Safer. “I’m calling you from a cellular phone, but a real cellular phone—a handheld, portable, cellular phone.

“And there was silence on the end of the line.”

Now 92, Cooper still smiles about the moment. It’s detailed in his new book, “Cutting the Cord: How the Cell Phone Transformed Humanity.”

“I’m a positive person,” Cooper told Inventors Digest. “I like all people because I learn from everyone.

“But the individual I called was on record—and still is—as totally dismissing Motorola’s contribution to cellular phone technology. I could not resist the opportunity to tell him that I was calling him on a real cell phone …

“If I was creative enough, I would have come up with a few more suitable adjectives.”

Cooper’s best-known career achievement reflected a calling that was apparent early in his life.

He graduated from the Illinois Institute of Technology (IIT) in Chicago with a bachelor’s degree in electrical engineering in 1950. Cooper joined the U.S. Navy and served during the Korean War, which also helped shape his career.

“The U.S. Navy taught me the skills of leadership and the responsibility we all have to support our fellow citizens,” he said. “While they failed to turn me into a bureaucrat, I learned the importance of preparedness, teamwork and practice.”

Cooper first put those skills to use at the Teletype Corporation before moving to Motorola in 1954. He earned a master’s in electrical engineering from IIT in 1957.

His star had climbed at Motorola long before his career zenith in 1973. Cooper worked on projects such as the first radio-controlled traffic-light system, which he patented in 1960, and the first handheld police radios, introduced in 1967.

One of his most important career influences was his mentor John Mitchell (not the Watergate John Mitchell!), Motorola’s mobile and portable products chief engineer who eventually became the company’s president and chief operating officer.

“John had a unique ability to distill technical and business issues to their essence,” Cooper said. “He had no patience for egotistical puffery or academic elitism. His mantra was objectivity; there is no role for emotion or personality in business and engineering decisions.

“John Mitchell introduced me to the concept of the freedom that wireless communications brought to business and public safety people. With cellular technology, I extended that philosophy to embrace all people.”

Although the first handheld cellphone was Cooper’s idea, it was a team effort. So despite the invention’s iconic status, he is more proud of one of his 11 patents that reflected his contributions every step of the way.

“I’m most proud of a less-significant device called a ‘channel element’ that was used in the first nationwide dial car phones,” he said. “It was small enough in scope that I not only conceived of the technology but did the initial design and then led its marketing. It’s seldom that an individual has the privilege of contributing in every step from idea to user.”

We can credit Dick Tracy as the inspiration for the first handheld cellphone. Not Captain Kirk.

Although many reports say Cooper’s idea originated with “Star Trek” visions, “Dick Tracy gets credit. From the time we built the first handheld two-way radios for police departments, we yearned to reduce its size to wrist proportions.

“We finally succeeded when Dick Tracy revealed his wrist videophone—although the user had to be someone with huge wrists.”

It seems impossible that the Motorola cellphone project took only 90 days, as has been widely reported. But Cooper said it’s true.

“There were over 20 people on the research team that built that first phone. But we also needed to build phone switches and cell site transceivers for the demonstrations we did in New York and Washington, D.C. When you add the installation teams in those cities, the P.R. people and the lobbyists, more than 100 people were involved.

“The team started work in late December of 1972 and had the first fully working unit near the end of March. To be fair, the team was still repairing the two protypes an hour before the April 3 demonstration.”

Cooper said the biggest challenge of developing the technology was providing adequate power in such a small phone—a routine element in today’s devices.

“Many breakthroughs were required to create cell phones with the power and small size of today’s handheld devices. Before the cell phone, we had never built a two-way radio with more than a dozen radio channels.

“The first phone that we demonstrated in 1973 could tune to over 400 channels. These channels were synthesized by one of the first integrated circuits made by Motorola’s semiconductor division. The ability to talk and listen at the same time had required filters that, alone, were the size of the entire phone.

“That miniaturization was a near miracle. The 1000 MHz frequency band in which the phone operated had never been used for commercial service. And hand-wiring all that technology with hundreds of individual components was, itself, a miracle. Even the antenna had to be specially designed.”

Considering that the first cell phone is almost 50 years old and that the device did not become prominent until the 1990s, there is a time disconnect of sorts. Why did it take 10 years for Motorola’s  DynaTAC 8000x cellphone to come to market?

“The biggest problem was creating the technologies that allowed a commercially viable handheld phone to be manufactured,” Cooper said. “Even in 1983, when commercial cellular service began, a handheld phone cost $4,000, equivalent to about $10,000 today. And it didn’t work very well.

“And when we finally were able to make commercial phones, the Federal Communications Commission, the U.S. agency that manages the radio waves, had to figure out who would be the service providers. The Bell System was a monopoly that was the only service provider for phone service before 1983. We at Motorola believed that cellular service should be a competitive industry.

“That decision took time to resolve; it engendered a battle between the Bell System and Motorola in which the FCC was the referee. Fortunately, the FCC made the right decision and the dynamic cellular industry of today became a reality.”

The more Cooper has thought about how the cellphone has changed civilization, the more it led him to modify the focus of his book.

“When I started the book, my sole objective was to document Motorola’s role in creating the cellular industry,” he said. “As that story took shape, I realized that there is rarely a eureka moment in inventing. Big inventions happen when inventors have the tools and confidence that come only from experience. So, I added some details of my early career.

“I also discovered that few people understood how the cellphone changed the lives of billions of people in emerging countries, so I added some examples of that viewpoint. Perhaps if I was younger, I would have undertaken three books.”

It’s hard to imagine an invention more impactful than the cellphone in the past 100 years, especially as it relates to emerging countries—“where the ability to transfer money and the improvements in productivity have had a huge impact on poverty. A UN study estimated that 1.2 billion people have moved out of severe poverty in the past 20 years, largely as a result of the presence of the cellphone.”

Cooper is still thinking and solving problems. He is a member of the FCC Technology Advisory Council, the National Academy of Engineering, and other organizations that try to solve societal problems. He occasionally advises startup companies.

“And my wife, Arlene Harris, is a dynamic inventor and businessperson. Just keeping up with her is a full-time job.”

We couldn’t resist asking Cooper if he still has a landline.

He does—“out of habit and because the line is bundled with my cable service. The only calls I get on that line are spam, but experiencing that annoyance firsthand allows me to complain with more legitimacy than those who are totally wireless.”

How can this be?

Marty Cooper, “Father of the Cellphone,” is credited with one of the most impactful inventions ever. He was named one of the 100 most important inventors in history by Time magazine.

He was asked: How in the world are you not in the National Inventors Hall of Fame?

“I have received more than adequate recognition,” he said. “There were other inventors and leaders who deserve a great deal of credit for the emergence of the cellular industry.

“Don Linder, the engineering manager who ran the team that made the first phone, was awarded three patents for technology in the phone development. I would love to see Don in the hall of fame. And Motorola’s leaders, Bob Galvin, Bill Weisz, and John Mitchell, who bet that company on the success of cellular, have not had their contributions adequately recognized.”

Martin Cooper is the lead inventor named on “radio telephone system” filed on Oct. 17, 1973, with the then-U.S. Patent Office and later issued as U.S. Patent No. 3,906,166. John Francis Mitchell, Motorola’s chief of portable communication products, and the engineers who worked for Cooper and Mitchell are also named on the patent.