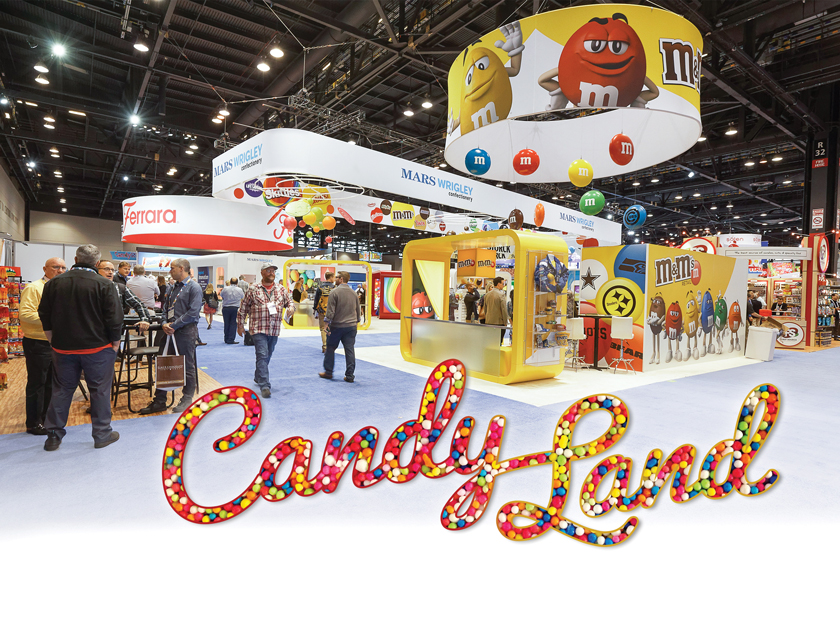 If you ask James Harden, it was a slam-dunk that Trolli Sour Crunchy Crawlers won Best in Show at the recent Sweets & Snacks Expo in Chicago.

The 2017-18 National Basketball Association Most Valuable Player is not only a spokesperson for Trolli, he’s represented in some of its product—namely, the Trolli Sour Brite Weird Beards in the shape of his face, with the beard in a different color.

Candy is bigger business than ever these days, with innovation and its stakes seemingly at an all-time high. Maria Sharapova, one of the expo’s all-star guests, was a visible presence as she appeared in connection with her Sugarpova candy line (see main story).

The National Confectioners Association—hosts of the May  event—cited data from Grand View Research in mid-June that said worldwide snack bar sales are anticipated to reach $31.6 billion by 2025 due to changing consumer lifestyles and food patterns.

It’s a long way from the days of Necco wafers, Bit-O-Honey, Mallo Cups and other vintage treats, although the show featured some of those, too. Success in today’s candy industry is largely dependent upon marketing, presentation and keeping up with the Hersheys via the latest trends.

If you’re wondering about the connection between candy and inventing, don’t. Innovation is a dominant theme at the show that this year featured more than 800 exhibitors and 350 new candy/snack products, presenting to more than 15,000 candy and snack professionals.

Just as inventor Harry Burnett Reese conceived the top-selling Reese’s Peanut Butter Cup in 1928 to help provide for his 16 children, somebody or some company invented the Sour Patch Kids Twins Tube Freezer Bar.

The Trolli line and its offbeat marketing campaign is the hallmark of innovation. (Ironically, Trolli Sour Crunchy Crawlers were not available for tasting at the Chicago show. They have been described as a gummy worm with a thin, crunchy texture. Trolli Sour Candy Corn won a Most Innovative New Product Award for seasonal.)

Some of the new blockbusters came from venerable industry mainstays. Triscuit Wheatberry Clusters, which won a Most Innovative New Product Award in the Savory Snacks category, marked the first time in the company’s century-plus existence that it launched a non-cracker snack. Wheatberry Clusters feature wheat berries in their original whole wheat kernel form, roasted and clustered together with natural ingredients such as nuts, seeds and dried fruit.

Triscuit’s non-cracker debut is a shining example of a dominant industry trend: real fruit and real vegetable snacks—freeze-dried or dehydrated fruit, fruit clusters and fruit nut clusters—as consumers try to get more fruit and vegetables into their diet.

Jared Koerten, an analyst on packaged foods for Euromonitor, talked about the three main premiumization components during an interview at the show. Premiumization is an oversyllable-ized way to describe an industry focus on superior quality and exclusivity.

The push for wellness has led to products with probiotics, fiber, collagen, omegas and even aloe vera “as people turn to snacks as more than just an indulgence but looking for an additional health benefit.”

Packaging continues to be crucial. Whether it’s made of foil, standup pouches, boxes or tins, a product’s appearance on the shelf is as important as ever in the face of growing competition. Main sub-elements are functional packaging such as “grab-and-go,” smaller pack options, and seasonality within packaging.

But ruby chocolate is the real new sweet spot in the category. Ruby cocoa officially arrived in the U.S. market in mid-May; chocolatier Barry Callebaut marked the occasion a week later with a ruby chocolate reception at the show.

The chocolate, which has a slight berry flavor and is ideal for Valentine’s Day, is billed by Callebaut as the greatest innovation in chocolate since Nestle introduced white chocolate 80 years ago. However, the Chicago Tribune reported that Callebaut has been waiting for more than a year to get permission from the Food and Drug Administration to market ruby as “chocolate,” with the hope of creating a fourth type of chocolate after dark, milk and white.

Once his company gets a temporary marketing permit and can sell the product as chocolate, it can begin gauging interest from manufacturers and consumers in creating a new category of chocolate.

The 2019 Most Innovative New Product Awards winners, selected from more than 300 products: