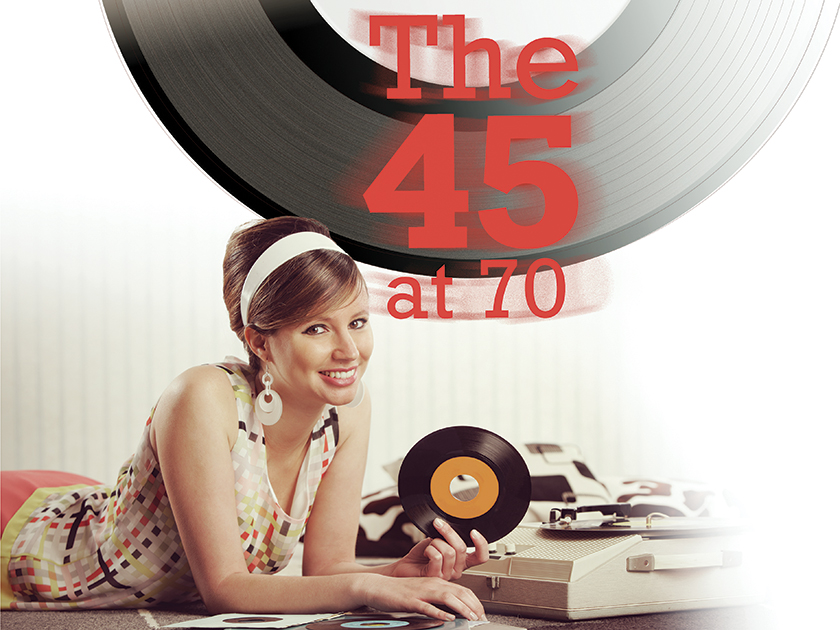 The records were said to feature a “distortion-free playing service” and last many times longer due to a “special Shoulder Construction.”

When it comes to iconic inventions in 20th-century pop culture, the 45 RPM record quickly spins into the mind’s eye whether we lived its heyday or not.

In YouTube videos, the colorful little discs fall from a spindle changer before playing a vintage hit. Retro and current movies show them being played in jukeboxes back in the day. Reruns feature their prominent presence in the opening credits for the debut of the TV smash “Happy Days” in 1974—the 45’s peak sales year.

For those who bought 45s from youth into adulthood, the memories are more personal and lasting: the joy of having your favorite song in a portable format, and for well under a dollar. The occasional picture sleeve that provided a bonus souvenir (some worth hundreds of dollars today). The carrying cases with sheets of numbered stickers inside. Those thin little red or yellow plastic thingies that served as a makeshift adapter—you know, the ones that unintentionally looked a little like round swastikas.

The 45 RPM single reflects a simpler time in technology and the world. The 70th anniversary of its release reveals some detailed and surprising origins.

‘Mary had a little lamb’

Let’s start with the 45’s genesis—the phonograph on which it was played.

Thomas Edison discovered his favorite invention in 1877 while working to improve the telegraph and telephone. He correctly figured that their technology could be modified to record sound.

Edison designed a machine with two needles: one for recording sound and one for playing it back. The first needle would indent the sound vibrations onto a cylinder covered with tin foil; the other one would copy the exact indentations to produce the same sound again.

He spoke the words “Mary had a little lamb” into the machine, was shocked to hear them played back, and recorded phonograph history was under way.

(Edison wasn’t just a great inventor but a savvy marketer. He soon imagined such important uses as talking books for the blind, music boxes, and leaving phone messages. In 1878 he opened the Edison Speaking Phonograph Co., which was an immediate success.)

However, the cylinders required for Edison’s phonograph were expensive to produce in large volumes and besides, his designs and concepts were strongly protected by patents. So in 1892, Emile Berliner developed the concept of a flat record. It could inexpensively be duplicated by pressing it from a master disc, and it had music on both sides.

Google the history of the 45, and you’ll often read that RCA Victor invented it in 1949 as a response to rival Columbia’s introduction of the 33 1/3 RPM long-playing record a year earlier. Wrong.

RCA Victor had secretly developed the 45—and its own phonograph for playing it—some 10 years earlier. (How secret? Inventors Digest was unable to find a patent.)

Nonetheless, the competition between the companies responsible for the 33 1/3 and 45 is relevant to this story.

Up to this point, the only record format was the 78 RPM shellac record—easily breakable, with very limited frequency response and sound quality. The 33 1/3 featured superior responses and quality; it also had much less hiss and scratching, as well as less weight for lower shipping costs.

Sarnoff publicly nodded to the 33 1/3’s substantial technological advancements, while privately his fiercely competitive business instincts raged. Often characterized as a ruthless businessman, he froze out TV inventor Philo Farnsworth in a long court battle that was referenced in the August 2016 Inventors Digest.

“David Sarnoff and his engineers politely expressed their approval and admiration for the ‘new’ recording medium developed by Columbia, but following the tour and demonstration, David Sarnoff ordered his engineers in marketing and research to bring into production the previously developed RCA Victor 45 RPM system (which had been kept a carefully guarded industrial (sic) secret for nearly 10 years).”

The June 1949 issue of RCA Review bears this out, via a paper published by company engineers that read, in part: “About 17 years ago, there began a program aimed at a fundamental improvement in the reproduction of recorded music.

“Unhampered by any previous restrictions, (sic) attempt was made to develop an ideal method of bringing recorded music into the home. Factors of cost and convenience to the customer, playing time, record life, freedom from distortion and numerous technical considerations were established with the ‘ideal’ being the objective.

“Some nine years of research and experimentation culminated in a new record playing means which, after eight more years of testing and refinement, finally emerged in a record changer and record to be discussed in this paper.”

At Columbia, Goldmark and his team were flummoxed that RCA

Victor had seemingly developed this revolutionary record medium in just a few months—unaware that their rivals had invented and developed the 45 RPM record and changer in 1938 or 1939.

CBS News says the 45 RPM record was unveiled on Jan. 10, 1949. (False; the player was released in January 1949, with the records themselves unveiled in March.)

The oft-erroneous Wikipedia says it was released on March 31, 1949.

The most reliable date is March 31—confirmed by music industry aficionado Norm Katuna, who quoted from copies of the RCA distributors’ Record Bulletin and who researched actual bound volumes of Billboard issues from the 1940s at the magazine’s offices.

The records were said to feature a “distortion-free playing service” and last many times longer due to a “special Shoulder Construction” that keeps playing surfaces from rubbing (against) one another so as to prevent damage to record grooves. The seven-inch size allows more than 150 single records or 18 symphonies to fit in one foot of bookshelf space.

The changer, made only by RCA Victor, was said to be the world’s fastest—the “easiest, surest operating changer ever … and it costs less”—with the ability to play more than 50 minutes without need of attention.

On May 7, 1949, “You’re Adorable” by Perry Como became the first 45 on the Billboard charts. The following week, “Riders in the Sky” by Vaughn Monroe became the year’s biggest 45 hit.

With its low cost, portability and small size that made it perfect for jukeboxes, the 45 caught on quickly.

Bill Haley and the Comets’ “Rock Around the Clock”—which, ironically, opened the introduction to the first “Happy Days” episode in 1974—sold 3 million singles in 1955. Every major artist eventually appeared in the format, from the Beatles to the White Stripes. Some 45s, such as “Honky Tonk Women” by the Rolling Stones, were first released in that smaller format—not pulled from an album per the prevailing industry practice.

The format peaked in ’74 with 200 million units sold, according to the New York Times. But inevitable shifting preferences and technological advances hastened the 45’s downward spin. Album rock grew in popularity, jukeboxes faded from view, and the cassette format soared to prominence.

You can still buy newer 45s, of course. They are now a nostalgia market, buried long ago by newer conveniences ranging from (short-lived) mini-CDs to mp3s.

Still, for many the 45 will live on indefinitely as a comforting reminder of happy days.