The Language (and Vision) of Inventing 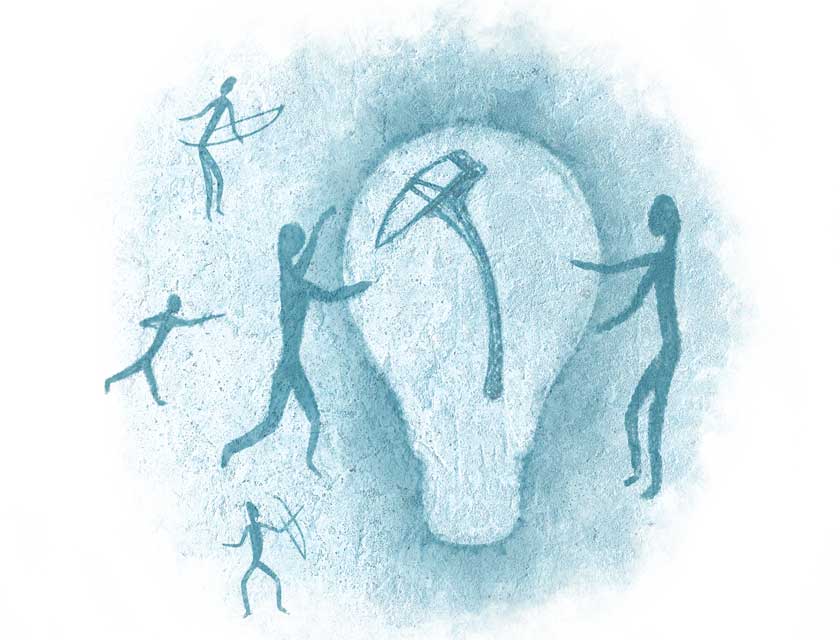 2 rocks that became a hand axe were a foundation for inventions, and later the spoken word

The inventor’s language, as I think of it, is a vision of form as well as sounds and their symbolic equivalents.

Two and a half million years ago, a human picked up two rocks from a nearby stream. One was selected as the workpiece, the other as the hammer.

The person oriented the workpiece upright on a boulder and struck several sharp blows to its top. It split into two pieces, one about a quarter of the workpiece’s mass. Then began the challenging job of chipping away at one side of the smaller chunk to form a sharp edge.

The finished tool was what anthropologists call a hand axe—often referred to as humankind’s first invention.

We date the origin of the first humans, Homo habilis (handy man), from the invention of hand axes because their rough craftsmanship demonstrates the first evidence of the planning and making of an artifact of any kind by humans.

Our brains were about half their present size back then; the inventive mind was not an experienced mind. We did not have speech or language with which to talk to ourselves for fueling our imagination and refining the crude tool. Little improvement of hand axes was evident for nearly a million years.

A breakthrough occurred when stones were shaped as triangles or ovals and their edges were sharpened on both of the long sides. Although these tools were still referred to by anthropologists as hand axes, they apparently were the “Swiss army knife” of their day—used to cut meat and trim it from the bone, cut kindling wood, and possibly defend against predatory animals or other humans.

Then, about 400,000 years ago, the Neanderthals branched off from the hominin main line and settled in Europe. Estimates of when refined vocal language began range from 150,000 to 50,000 years ago.

The tongue, palate, throat and voice box are soft tissue and do not fossilize, so we don’t know for certain when humans were capable of speech as we know it today. But it makes sense that if the Homo sapiens species (us) dates to around 315,000 years, we probably acquired the physical components of refined speech before we developed and refined it. More likely, the two evolved together.

It seems logical that a spoken language was helpful, if not essential, for major migrations to occur.

Planning the slow journey and settling the immigrants was facilitated by the use of refined language. About 80,000 years ago, Africans began to migrate to various parts of the world. Europe was the popular choice—probably because it was relatively close and had large game, which may have become scarce in Africa.

About 45,000 years ago, invention of the bow and arrow and atlatl (spear thrower) were also aided by language. Imagine inventors of that time comparing ideas on the best wood for making the bow and where to find it, and arguing about the size and shape and their personal choice of flint for knapping spear and arrow tips.

Language no doubt contributed to the relatively rapid spread of farming as a means of having a more predictable food supply, and it reached a startup peak around 10,000 years ago.

As farming increased in efficiency, farmers produced surpluses. Trade was established, and a means of counting and recording was invented around 4,500 years ago.

The language of numbers had its simple start. Trading centers became towns and cities, and civilization had its unintentional beginning.

As life in the cities became more complicated, the language expanded to provide nouns for names for new things, verbs for instructions, commands, and questions, and adjectives and adverbs for emphasis. But language was not fascinating until about 2,500 years ago, when the Greeks invented geometry.

For the first time, numerals, symbols (alphabetic letters), and images were combined to form a more advanced means of communications—one that would serve as a basis for trigonometry, which followed about 300 years later. And trigonometry formed the basis for much of engineering, construction and even inventing.

A battery of refinements

Another refinement to language began in 1800, when Alessandro Volta invented the first battery.

Volta’s battery enabled inventors to experiment safely with low voltage, and soon Michael Faraday in England invented the electromagnet and a flea-power motor.

Then, in 1826, German physicist Georg Simon Ohm wrapped up the various attributes of electricity, volts, amps, ohms, and watts into a simple algebraic expression known as Ohm’s Law. It is based on the principle that one volt of force can press one amp of current through one ohm of resistance.

Now, our language included a universal formula that could be used by any experimenter or inventor to predict and arrange the flow of electric current through a circuit as simple as an electromagnet, or as complicated as a computer.

The invention of radio enriched our language with more principles and units of measure such as farads for capacitance (from Faraday), henrys for induction (from Joseph Henry, American physicist), and hertz for frequency (from Heinrich Hertz, German physicist).

In 1869, Russian chemist Dimitri Mendeleev invented the periodic table, leaving gaps for predicted elements that eventually were filled in. As with geometry, the table added a graphic component to our language and way of thinking.

I’m sure there are many other significant refinements to our language, but I’ll end here with the computer and integrated circuit chip—which have popularized the concepts of algorithms and programs, the language of logic.

It began with a couple of pieces of stone, and now we have robots and space travel. We don’t know for sure that our ancestors of 2.5 million years ago relied on a mental image of the hand axe before making it. But it would seem probable, because verbal language was not yet in their toolkit for thinking about and shaping a piece of stone.

Thus, the inventor’s language, as I think of it, is a vision of form as well as sounds and their symbolic equivalents.

Many an inventor has “seen” his or her invention in a daydream or a sleep dream before sketching it or defining it in words. Isaac Newton said: “If I have seen farther than others, it is because I was standing on the shoulders of giants.” He saw our solar system planets in their elliptical orbits and translated his visions into mathematical formulas for gravity and motion.

We inventors have inherited a rich, versatile and precise language for use in our patents, sell sheets, licensing agreements and self-conversations. And we are standing on the shoulders of giants: Edison, Tesla, Bell and Morse, of course.

But other giants were denied fame because their inventions did not, in their heyday, catch the imagination of the public. For example: Reginald Fessenden, the Canadian who invented amplitude modulation (AM) that enabled us to hear voice and  music on our radios; Grace Murray Hopper, known as the woman most responsible for the first compilers and the program language COBOL; Charles Steinmetz, the theorist largely responsible for alternating current proliferation; and hundreds of others who remain unsung.

May we stand on the firm shoulders of those inventors, look far ahead, and use to the best advantage the vision and language of inventing.