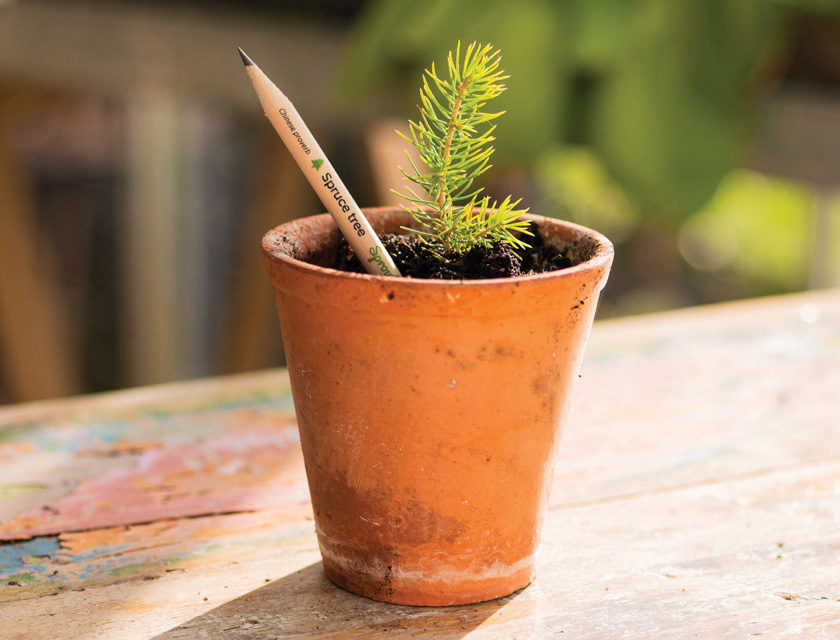 Patents helped sprout the concept, but then came the knockoffs

“We initially had our lawyers contacting the fake sellers, but we soon realized that was too expensive so we started to do it in-house ourselves.”

It has likely been a while since most of even used a pencil—but would we use them more if they grew flowers, trees and herbs?

Enter Sprout World, a company founded on the concept of sustainability that credits patents as playing a large part in its success. In late 2012, Michael Stausholm, the company’s founder, happened upon a Kickstarter campaign launched by three MIT students for a pencil one could use and then plant in the ground to grow flowers, herbs, vegetables and even trees.

“I saw it and thought it was a wonderful idea,” he said. “I had been working in sustainability for many years and everyone was talking about it, but what was it actually? The pencil was a wonderful way of illustrating the concept.”

Luckily, the students had taken out a provisional patent application. Once Stausholm acquired the global intellectual property rights, he applied for the patents in Europe, the United States, Canada, Australia, China and several other markets in Asia. The last of these (the Chinese patent) was granted in March 2020.

Sprout also has a globally registered trademark, including in smaller markets such as India and Vietnam, for goods such as stationary, kitchen utensils and makeup. This is because in addition to the pencil, Sprout sells a plantable spoon and is coming out with a plantable makeup pencil next year.

The company has sold 30 million pencils, both to companies and direct to consumers.

Of course, like any IP owner, Stausholm has had a crash course in infringement, fakes and enforcement. Although platforms such as Amazon and Alibaba have helped grow the company, they have also contributed to widespread counterfeiting. This comes with financial loss and reputational harm.

IPWatchdog spoke with Stausholm about his experience trying to protect a growing brand in a world where fakes are proliferating, and most countries’ legal regimes have yet to catch up with the problem.

Did you have any experience acquiring or enforcing IP before you started Sprout?

I had absolutely no experience in IP or patents when I founded Sprout. My background is in shipping, and I spent 15 years in Asia in production and sales. But we hired some very good U.S. patent lawyers from the beginning, and trademark lawyers as well. It took a very long time, especially for the Chinese patent, which took almost eight years in total. Australia was first, and the U.S. patent was granted in 2016 or 2017.

We started selling the pencils in 2013, and by 2015 we began to see copies, especially from China; it’s a big problem. It’s global, but it’s especially coming out of China, India and Turkey.

To curb the copies, we initially had our lawyers contacting the fake sellers, but we soon realized that was too expensive so we started to do it in-house ourselves. Nineteen out of 20 sellers would remove them, but there were still always some that persisted and we would have to pass those on to the lawyers.

How much do you think counterfeits cost the business?

It’s very difficult to estimate loss of sales on such copies. The good thing about the United States is that you have a very strong system for taking legal action against counterfeiters. You can demand that they submit their accounting books and seek damages from their profits, which is great, but in Europe you don’t have that option. You need to prove that you have lost business and lost money in order to get damages, and that’s almost impossible.

So, I can’t estimate how much it’s cost but that’s not even the worst part. The worst is that the counterfeits confuse consumers. We get a lot of complaints from customers that the product isn’t working, and it always turns out to be a copied product. It’s not so much the monetary damages but the reputational damage that counterfeiting does to the brand.

What role did Amazon play in contributing to or curbing counterfeits?

We started selling on Amazon in 2013 and we were on for a few years and it was OK, but then we encountered a lot of counterfeits and Amazon didn’t do anything about it. So, we took the products off and we re-launched in 2018 back on Amazon.

They are still very difficult to work with on counterfeits, but they’ve become much better and quicker because of the Brand Registry, so now—especially in Europe—they are very quick to remove counterfeits. In the United States, however, they’re still slow, to say the least, in reacting.