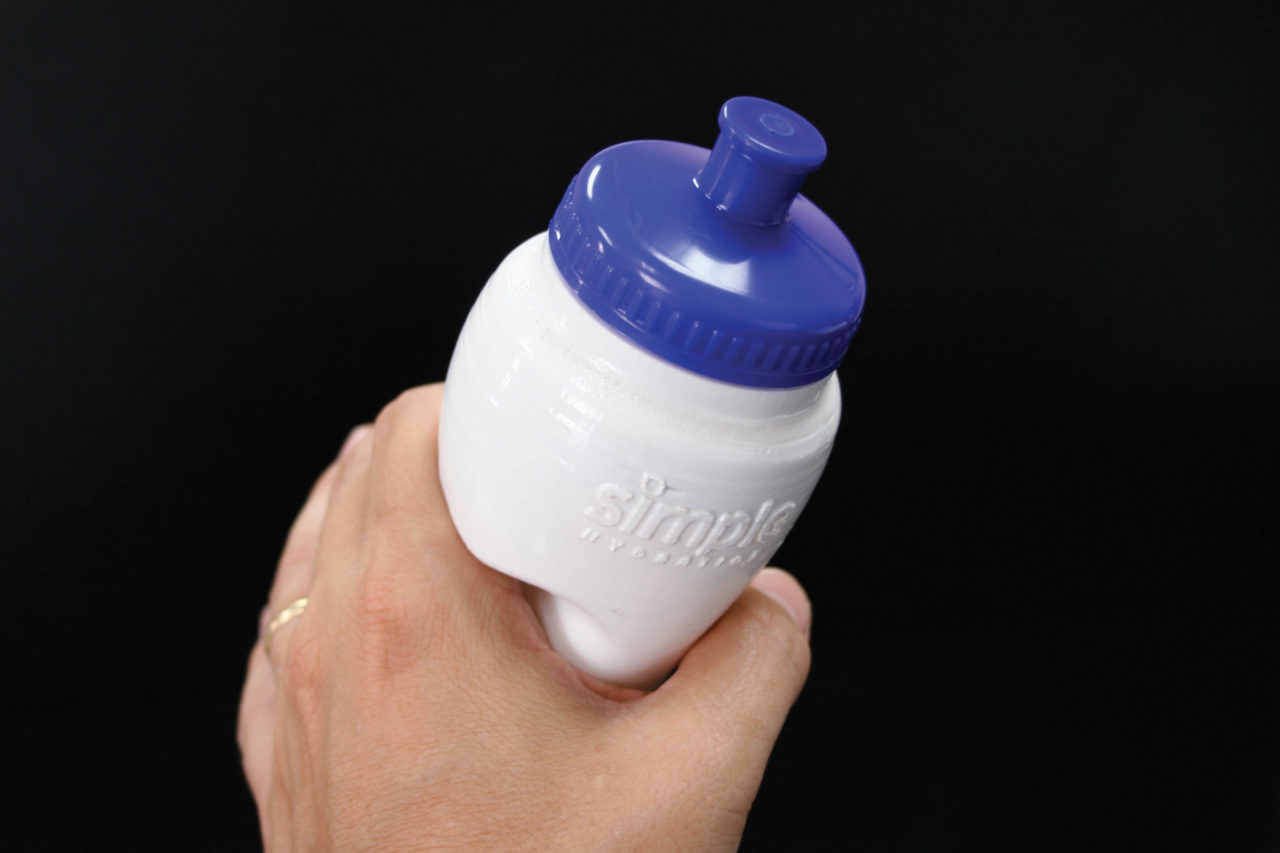 Aside from, perhaps, curling, hydration is crucial to success in every sport. Team sports managers keep water jugs on the sidelines for their athletes to consume during breaks in the action, but distance runners, bikers and triathletes must lug their own.

While the standard cylindrical sports water bottle works for some sports, runners often find the bottles difficult to carry. Runners’ belts help the situation, but they can be awkward and throw off the wearer’s center of balance. Designer and running enthusiast Brian Hock saw the fundamental flaw in the shape of traditional water bottles and came up with the Simple Hydration bottle, which has a more ergonomic shape, making it easier for runners and other athletes to carry.

Simple Hydration is curved and fits comfortably on the small of the runner’s back, which helps maintain balance. A hook at the end of the bottle allows it to rest on the waistband of the athlete’s shorts, pants, belt or in a pocket. It holds 13 ounces, which is perfect for a training run but not too heavy to drag the runner’s pants down.

Hock is a graphic designer by trade—but a running enthusiast at heart. He ran his first marathon at age 12 (four hours, 47 minutes) and went on to run cross-country and track in high school, and later at Bowling Green University. Hock continued to run after graduation for enjoyment and to stay in shape—and with running comes the need for hydration.

Throughout years of training, Hock endured the often uncomfortable and burdensome feeling of carrying a water bottle in his hand. He tried bottles clipped to running belts, but they bounced around too much and chafed his skin. He began to wonder if there was a better place on the body to store water, and he began to question the standard water-bottle design.

Hock came up with the idea for Simple Hydration on a sweltering summer day while training for the Louisville Ironman Triathlon. What if the bottle were contoured and could fit on the small of the back? Since there is nothing to secure a bottle on the back, other than a waistband, could the bottom of the bottle be molded into a hook, which would hang from the waistband of shorts or pants?

Hock says his wife helped him build crude prototypes, while his children “road-tested” them in his home’s family room. Once they had a viable concept, Hock’s graphic background enabled him to quickly sketch the bottle. The product-development journey was in full swing.

Hock consulted with his brother-in-law, a consumer-product designer, and pushed him to start looking at groups overseas to help with the design and production. However, Hock needed a prototype to prove his concept. Hock found a product-design group in California that was able to transform the design sketches into CAD and build prototypes.

Since most water bottles are 20 ounces, the first prototype was similar in size. After testing, Hock found it was too heavy and bulky and had a tendency to pull down his shorts. The size was converted to 13 ounces, and the second prototype worked so well that Hock was ready to look for a manufacturer.

His product-development firm located a small blow molder in southern California that specialized in oddly shaped parts. Fortunately, the company was capable of making the bottle for a reasonable price. Since the shape of the bottle was so unique, Hock chose to keep the cap simple. He found an injection molder in Kansas that had a nicely designed cap, and matched the thread design on the bottle to mate up with it.

Hock intended to launch the product on Kickstarter, but wanted to get it patented first. He found a local law firm and went straight to filing the utility patent, rather than a provisional one. In addition to the IP protection, Hock felt it would enhance his marketing efforts. Hock also considered filing international patents, but decided against it, as he felt he would not have the resources to fight infringers.

Prior to the launch of the Kickstarter campaign, Hock had a solid marketing plan in place. He founded a website called “Infinite Runners,” through which he was able to gather contacts for a variety of running companies and news outlets. He also had a healthy set of LinkedIn contacts, in addition to his friends on the runner’s forum dailymile.com. Hock launched his campaign in June 2011 with a $20,000 goal and, by August, had raised $21,180. The campaign gave him market validation, as well as the funds to cover the tooling costs and the setup of a distribution center near his home in Ohio.

Sales of Simple Hydration have steadily increased, but it has not been easy. Last year, a batch of caps did not fit the bottles correctly. “You think once you have the molds that everything is set and is going to work fine,” says Hock. “Then you have to troubleshoot and find out why it’s not working.”

It has been especially challenging to educate consumers about how to use the bottle correctly. Hock was surprised at how much explanation was necessary to show runners how it worked. He has since created a series of YouTube videos, in addition to demonstrating the product at trade shows.

Simple Hydration continues to generate buzz. Hock has a consumer base of devoted runners in the United States and abroad, with overseas sales a big portion of his overall revenue. He sponsors a team of competitive runners, who consistently finish on the podium of regional and national marathon and ultra-marathon events.

In the meantime, Hock continues to work at his design firm but notes that Simple Hydration commitments are taking up an increasingly larger chunk of his time. He is also working on other running products, including a new hydration device, in addition to a redesigned top for the Simple Hydration bottle. While Hock says he is an “average runner with a passion for the sport,” he now has a burgeoning business that helps keep his passion hydrated.