Tough Scrubbing Made Simple with The Simple Scrub™ 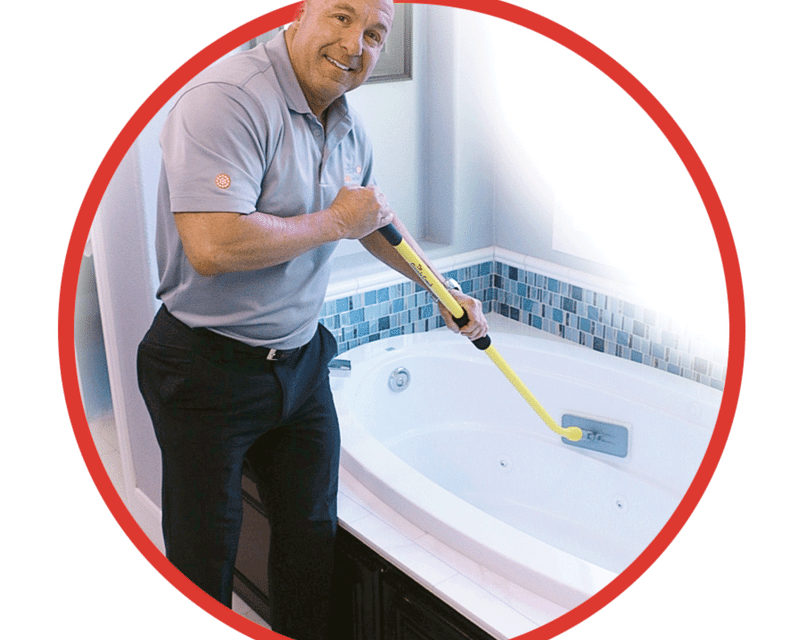 When Bill Manovich saw his grandma struggling to scrub the bathtub, he had his “aha!” moment. Former fraternity brothers Manovich and Mike Smith got together with the goal of making Bill’s grandma’s tub and shower cleaning chores—and everyone else’s—so much easier. Here, Smith speaks on behalf of the partners.

Edith G. Tolchin: How did The Simple Scrub™ come about?

Mike Smith: Bill is in the oil and gas industry in the Houston area. I am a dentist in Pearland, Texas. We met at Lamar University as fraternity brothers, and our friendship has carried on throughout the years. Bill came to me with the Simple Scrub idea in 2015. I had already gone through the process of bringing a product to market with MD Brush.

When Bill showed me the Simple Scrub product, I thought it definitely solved an age-old problem. Then when he told me the story of how he got the idea, I was sold. Bill walked into his grandmother’s house while she was cleaning the bathtub. Picture this: She had two washcloths strapped to her feet with a broom in her hands, standing inside the bathtub, twisting back and forth trying to clean. Her eyes were bloodshot from the fumes of the bleach, and she told Bill that when she bent down to clean she couldn’t get back up.

At that point he helped her out of the bathtub and told her he would find her something to clean it. He figured a quick trip to Home Depot would solve the problem, but it didn’t. He went to Home Depot, Lowe’s, Wal-Mart, Bed, Bath &amp; Beyond and many retailers to find nothing but devices where you’d have to bend over and scrub. Then he decided to make one himself. He went through various prototypes to come up with the one, which is the one we have now brought to market.

EGT: Your website claims The Simple Scrub “allows you to clean your tub and shower while standing up.” Please explain.

MS: If you ask a hundred people how they clean their bathtub and shower, the first thing all hundred will say is they bend over. Whether they use washcloths or a bristle scrubber, it’s always the same answer.

The Simple Scrub is made from an aluminum pole that is powder coated and has a unique ergonomic bend. What does that mean? You cannot break the pole, it will not rust, and it allows you to clean any part of your bathtub or shower without bending over at all. Plus, it has a swiveling head that allows you to clean around the rounded corners of the bathtub and at various angles. The two handles allow for extra grip, and the scrubbing pad on the bottom cleans with just moderate pressure. It only weighs a pound and a half, so it is super lightweight for Grandma to use.

EGT: Why is The Simple Scrub different from other bathroom cleaning tools?

EGT: Is the product patented?

MS: It is patent pending, and The Simple Scrub name has been trademarked.

EGT: How is the product sold? Are there accessories? What is the price?

MS: Each Simple Scrub is sold as one piece with one pad attached to the end. We think we made it too well—meaning that used under normal cleaning procedures, you will not break it and it won’t have to be replaced. It’s a one-time buy.

The price is listed at $47.99. We have now launched our new line of pads on Amazon. We have a cloth pad that will allow you to dry the bathtub and shower, doors and glass panes, mirrors, and it’s also great for baseboards. The pads are sold by abrasiveness levels. White pads are for the bathtub and shower, red pads for stains or spills in the house and black pads for pools or any cement stains that need to be scrubbed. All pads sell at $17.99 for a 5-pack or 2-pack of the cloth pads. And, there is a combo pack of all three pads and two cloth pads for $26.99.

EGT: How is the product packaged? Are you selling anywhere other than on Amazon?

MS: Our packaging surrounds the head and pad to stay locked into place. As of now, The Simple Scrub is sold on Amazon and has been featured on Home Shopping Network, as we were their President’s Pick in this past year’s Good Housekeeping American Dreams Contest. When we went on HSN, we sold out of our inventory in 4 minutes.

We are scheduled to go back on again soon and are hoping for many additional opportunities with HSN. At this point we are still trying to break into the retail market, but we know this takes time and exposure. We are hoping that retailers will see the need for this product in their stores.

EGT: Who created your logo and product name?

MS: Bill and I came up with the name out of the simplicity of using the product. Our corporate name is MGI Solutions LLC, which stands for “My Grandmother’s Idea.” We have a few key people we work with for marketing and packaging.

EGT: Are you currently manufacturing in the United States or overseas?

MS: Until recently, we had assembled the first few thousand Simple Scrubs ourselves. Since demand has increased, we have a new manufacturing location in Houston. We are happy to say, “Made in the USA.”

EGT: Tell us about your experience with HSN.

MS: It was awesome. Angelique (Bill’s wife) mentioned a contest in a magazine she was reading. The contest ended July 31, and we entered a few days before. Within two weeks, we were notified that we made the finals of the contest and we would be presenting at HSN headquarters.

We were excited to have this opportunity. We presented the product in front of a panel of 20 people or so. From there, cuts were made for the chance to go to the second round, which would be later that day. We made it!

Then, we got the chance to present again in front of another panel. From there, results were given at a later date. We ended up getting to the top 12. We did not make the finals of the contest but personally, I think, we received the highest honor by becoming the “President’s Pick.” Mr. Bill Brand picked us to represent him on HSN, and to our astonishment we sold out in 4 minutes of air time. I guess that is why he is the president of HSN; he knows a great product when he sees it. We are set to go back on HSN soon, and hopefully many more times.

EGT: What obstacles, if any, have you faced in developing this invention?

MS: In dealing with MD Brush, my partner and I went through numerous pitfalls in the manufacturing and marketing process. Now, MD Brush has become a very successful product. We have used this knowledge to jump over some of the costly roadblocks I experienced with that development process.

EGT: What advice do you have for readers?

MS: The main thing Bill and I see today is that all sorts of people have ideas, but for one reason or another they don’t act on them. It just sits in their back pocket until it’s too late or someone else comes up with the same idea.

You have to act on your dreams. It has taken the both of us to make this dream a reality. Bill is great in sales and is the face of our product. Everyone who meets Bill Manovich loves him. That is his strong suit.

I am on the back side of this project, basically putting the puzzle together and making sure things get done to push us to our goals. I feel that if each person utilizes their talents to the fullest extent, they will be successful. Sure, there will be failures. I have failed more times than I wanted and they were expensive failures, but we would never be where we are now without them.

So many people have ideas but are not willing to put the research in to make it successful. You have to be driven. Success does not always have to be defined in monetary rewards, though that’s always nice. Success can also be the knowledge you gain that leads you to the next door that opens. And how many people get to develop a product with their best friend, and they remain best friends?