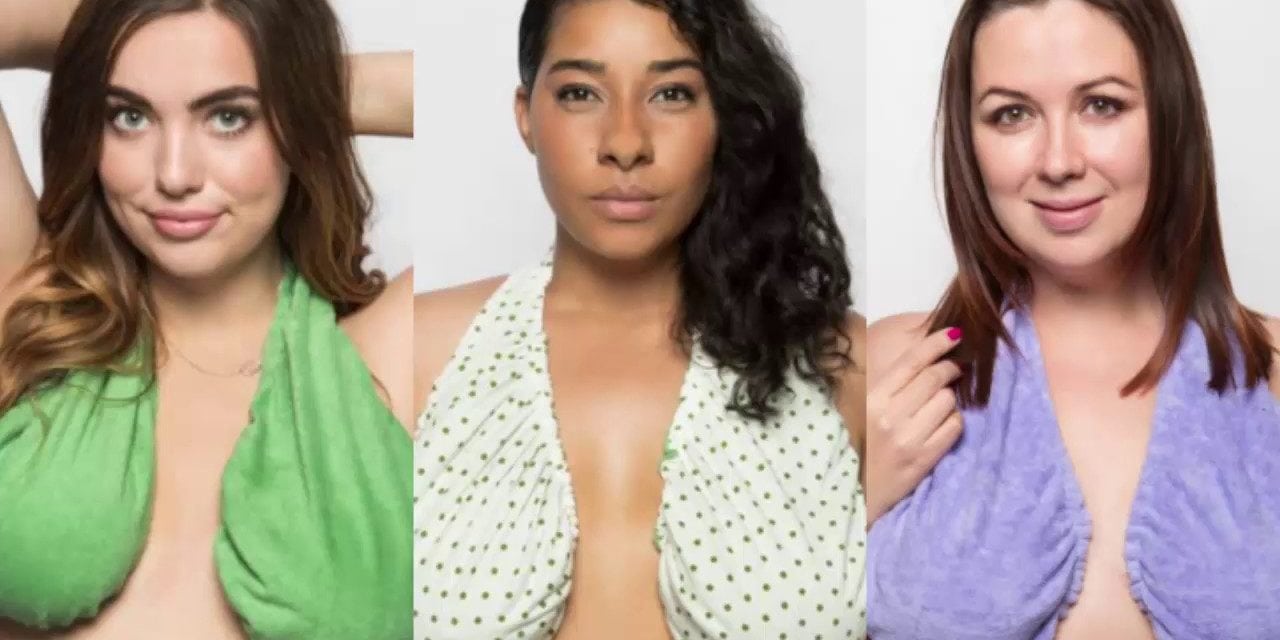 The Ta-Ta Towel was designed to absorb moisture from underneath the breasts and behind the neck, keeping bacteria at bay. But it has myriad other uses.

In my work with inventors since 1997, more often than not the inventor has been a man. The same is true regarding my interview subjects in Inventors Digest. So for me it’s refreshing to learn about products invented by women, which are often baby products.

Here we have a novel idea for a product by a woman, for women—and it is not a baby product. Erin Robertson of Los Angeles, inventor of the Ta-Ta Towel, explains her creation.

Edith G. Tolchin (EGT):  How did your invention come about?

Erin Robertson (ER): I do not have a background in fashion and/or design. I am just your typical everyday woman who saw a problem and sought to fix it. Whenever I got out of the shower, I’d do the same routine of wrapping my towel around the top of my breasts to keep them in place. This proved to be annoying because it would always fall off. During the times it stayed put, I’d be sweating underneath my breasts and around my neck as I tried getting ready. I couldn’t stand blow-drying my hair and putting makeup on.

I was tired of being reminded by my towel every morning that I am a bit “top heavy.” Not only was the towel an annoying reminder of “big-girl problems,” it would also “smoosh” my breasts down, leading to under-boob sweat, and I felt that something had to be done.

The Ta-Ta Towel is a patented towel solution that’s made out of terrycloth fabric on one side and a super soft liner on the other. The garment absorbs moisture from underneath the breasts and behind the neck, keeping bacteria at bay.

Originally, it was meant to absorb the sweat that beads up while women get ready after their shower (during hair blow dries, putting on makeup, and so on). Since (idea) conception, the towel has been a solution for a variety of other reasons as well.

The Ta-Ta Towel is useful for pregnant and postpartum women, all of whom find the towel offers alleviation from breast pain and tenderness. For breastfeeding mothers, it also provides easy access for nursing. The garment can be worn to lounge around the house, right after a gym or spa session, or while doing household chores. Women who are recovering from open heart surgery or are going through radiation for breast cancer have also found solace in their Ta-Ta Towels. This is also true of the elderly, who feel better wearing a Ta-Ta Towel than they do a constricting bra.

EGT:  Had you invented anything before the Ta-Ta Towel?

ER: This is the first invention for me. I’ve always thought of myself as a problem solver, but I never thought I’d actually invent something that would be sought after by many people. I created this for myself because I was solving a problem I personally had. I’m truly humbled by the demand.

EGT:  Based on photos I’ve seen from your website, it appears the size range is from C-cup through H-cup. What about others?

ER: Ta-Ta Towel customers vary from big-breasted women, pregnant and postpartum women, women recovering from C-sections, breastfeeding women, those going through radiation and other breast cancer treatments, and also elderly women who cannot handle the constricting bra. The demand for Ta-Ta Towels has been incredible. Even though there’s currently a 4-6-week wait period, that is not slowing down the orders that are coming in, including requests for orders from other countries. Women of all shapes and sizes—and the men who love them—want to buy Ta-Ta Towels.

I hate to leave the smaller cup sizes out on the first round, but I wasn’t getting the same “Oh, my gosh, this is the best invention ever” response from the smaller-busted ladies. The design of the Ta-Ta Towel is such that it has to have enough under-breast to hook onto, so I started with my larger ladies first and worked my way down to a C cup. I’ve had a lot of requests from ladies who have smaller breasts and larger breasts, so I’m working on prototypes to accommodate every woman.

EGT:  How many prototypes did you make until you had the final product?

ER: I made about five prototypes before taking it to get patented. I still have every single one before the final. It’s a nice memory. Plus, I like to show my friends and family members where it all started—or, as I like to call it, “Taking a walk down mammary lane.”

EGT:  Have you run any crowdfunding campaigns?

ER: No, I have done this all on my own. As a writer, I sold my first TV show to a production company for $5,000 and put that money into getting my patent. A few days before Ta-Ta Towels went “viral,” I was looking for a job!

EGT:  Where is the Ta-Ta Towel manufactured? What type of fabric is used?

ER: I am proud to say that Ta-Ta Towels are made here in the USA. As for fabric, one side of the towel is terrycloth, and the other is made of the softest cotton blend fabric available on the market.

EGT:  Is the product patented?

ER: Yes, it is, and it was the best money ever spent!

EGT:  By which means are you selling the Ta-Ta Towel?

ER: The only place to buy a Ta-Ta Towel is on my website at TaTaTowel.com, soon to be TaTaTowels.com. I would be open to selling on Amazon in the future, but right now I’m just focused on catching up with all the orders that have been coming in. There have been a lot of knock-offs, and that’s very frustrating.

EGT:  Any plans to add other products?

ER: Oh, yes! I am so excited for a couple new products coming out. In addition to the smaller and larger sizes, I have a new design I’m working on specifically for breastfeeding mothers. I also have accessories and gift packs coming out.

EGT:  Have you encountered any challenges in developing the Ta-Ta Towel?

ER: My biggest challenge currently is going from a small, one-person enterprise into a rapidly viral-expanding business. Scaling and managing the skyrocketing growth is an exciting challenge. The second challenge, not so exciting, has been protecting my patent from the many people trying to knock off my product. Knowing I am patent protected, I was surprised by the number of people who ignore the patent and try to scam my invention.

EGT:  Do you have any encouragement for inventors with first-time products?

ER: I would like to say to them what a close friend made me promise in the very early stages of my prototype phase: “Don’t ever give up… promise me that you will never give up, no matter how hard it gets or how defeated you might feel.” So those would be my words of encouragement. Also, keep going!