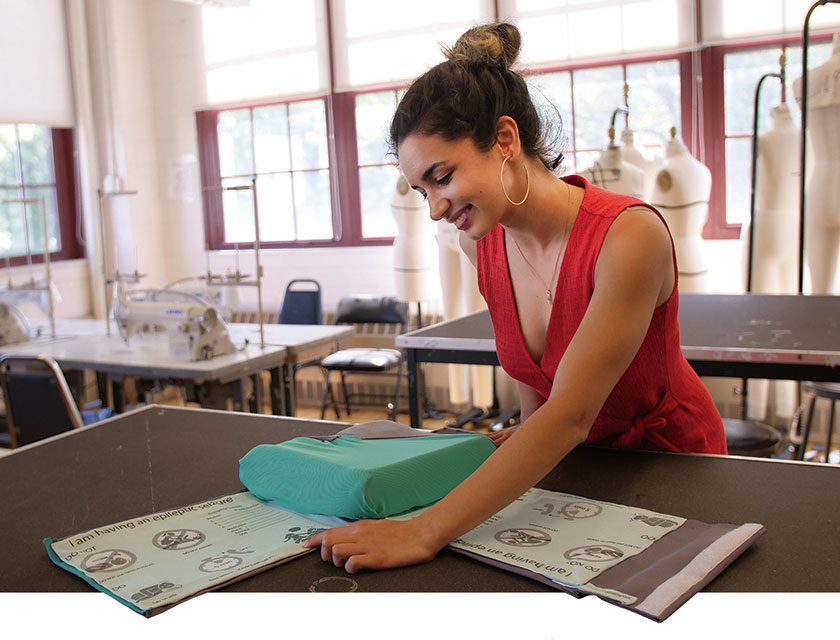 She was having seizures in public and was horrified.

Uma Smith was diagnosed with epilepsy at age 11. She has been hospitalized four times for seizures—three of which happened away from home and caregivers. Bystanders were helpless and panicked.

Keenly aware that there are more than 50 million people with epilepsy worldwide, she designed Cocoon, an anti-suffocation pillow combined with technology that alerts a caregiver and ambulance when someone opens the device and begins using it. Cocoon also has written instructions for bystanders that informs them what to do when a person has a seizure.

The 23-year-old recent graduate of Pratt Institute in Brooklyn, New York, is the 2019 American national winner of the James Dyson Award. She hopes to launch her design in the future. Cocoon is patent pending.

“There are products on the market that deal with epilepsy,” she says, “but there really should be something better. A lot of these products that are head gear and this kind of stuff, you don’t necessarily want to be like, ‘Oh, I need that,’ because it’s just informing you more about your disability.”

Here’s how Cocoon works: When an epileptic person experiences an aura at the start of a seizure, he or she opens the product and lies on one side. The person then slips Cocoon over the top of his or her head, leaving the face unobstructed.

Magnetic sensors detect when the device has been opened and alerts pre-designated caretakers of the epileptic person’s GPS coordinates. An accelerometer detects convulsions while a cell-connected chip calls an ambulance if the seizure lasts more than 5 minutes.

Smith went through 40 prototypes, calling the process frustrating but eventually highly rewarding. “I broke them down into three categories: the head support, the portability, and also the information.

“For the portability, I messed around with some origami, with inflation, with spring steel. Eventually the thing that seemed the most reliable was folding. And it just kind of pops out in seconds to become a safe space.”

Smith says that at one point she considered having the device talk, “but I realized that graphics and writing was a lot more reliable.”