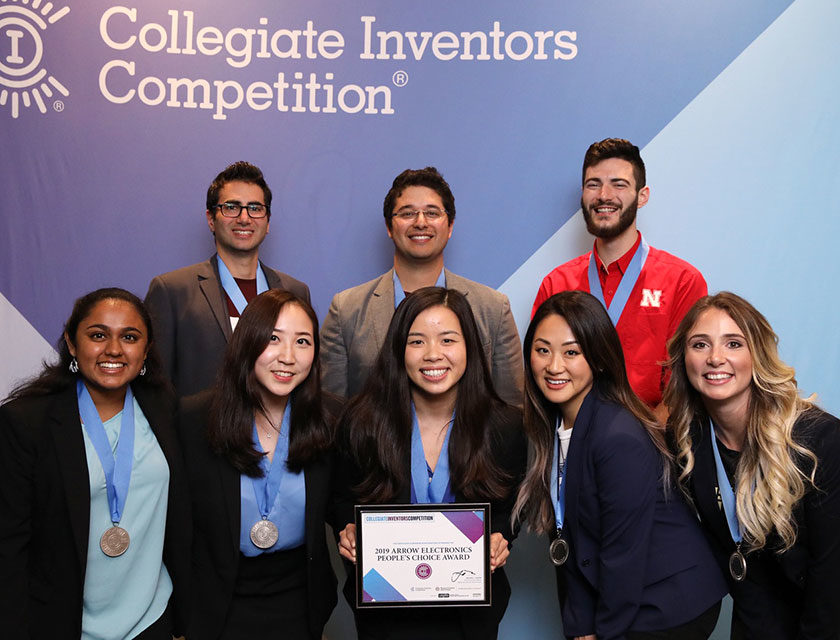 Conservation and efficiency are dominant themes for winners in the 2019 Collegiate Inventors Competition.

Among the four winning entries are a new class of more efficient transmission; a process that reuses water from power plants’ cooling towers; and an adapter for eyedrop medication bottles that reduces waste and cost.

The annual competition for college and university students and their faculty advisers is a program of the National Inventors Hall of Fame.

Five undergraduate and five graduate teams, consisting of 23 students from 11 colleges and universities across the United States, received an all-expenses-paid trip to the final round of the competition at the United States Patent and Trademark Office’s  Madison Building in Alexandria, Virginia. The teams presented their inventions to a panel of final-round judges that included hall of fame inductees and USPTO officials.

Winners ($15,000 prize): Undergraduate—PE-IVT (Positively Engaged, Infinitely Variable Transmission Using Split Helical Gears), by University of Nebraska–Lincoln team member Ethan R. Brush (adviser, Carl Nelson). As demand for electric vehicles rises, so does the need for manufacturers to identify a more suitable transmission. The PE-IVT represents a new class of transmission that combines the torque of gear-based transmissions with the efficiency of continuously variable transmissions. It operates at 88 percent to 98 percent efficiency across all gear ratios. It could disrupt existing technologies and reduce energy losses across a range of applications and industries.

Graduate—Infinite Cooling, by the Massachusetts Institute of Technology team of Maher Damak and Karim Khalil (adviser, Kripa Varanasi). Freshwater sources are in high demand as regions fall into drought, and 39 percent of all freshwater withdrawals in the United States are attributed to power plants. Infinite Cooling can ionize and collect water from power plants’ cooling towers to be reused as industrial and drinking water. If this invention was used in all power plants across the country, it could save as much as 200 billion gallons of water per year.

Graduate—Nanodropper, by the Mayo Clinic Alix School of Medicine/University of Washington team of Mackenzie Andrews, Allisa J. Song and Jennifer Steger (adviser, Raghu Mudumbai). For millions of people with eye conditions such as glaucoma, the unregulated size of eyedropper tip openings poses significant problems. Oversized drops dispensed from these bottles result in wasted medication, leading many to run out before their insurance covers a refill. Each missed dose can contribute to vision loss. Nanodropper is a universal adapter for eyedrop medication bottles that creates smaller and more efficacious droplets to reduce waste, decrease per-dose costs, and ultimately increase access to expensive, essential medications.