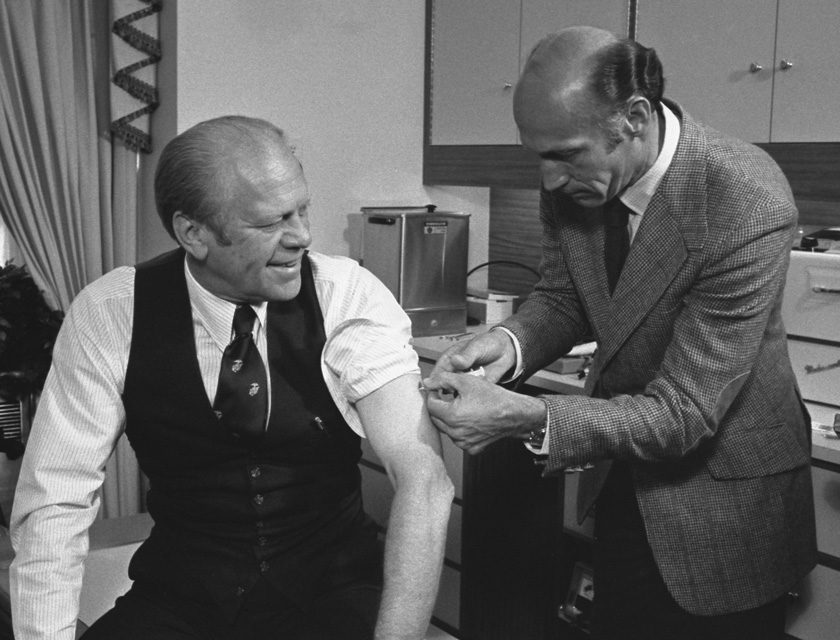 The CDC reports that efforts to limit the 1918-19 H1N1 virus “were limited to non-pharmaceutical interventions such as isolation, quarantine, good personal hygiene, use of disinfectants, and limitations of public gatherings, which were applied unevenly.”

The collective, plaintive cry has echoed throughout the world as the deadly coronavirus rampages along: Where is the vaccine?

We heard the question before, 100 years ago, amid the 1918-19 influenza pandemic that infected an estimated 500 million people and killed 50 million. But modern medicine, technology and innovation had not advanced enough to produce a solution—leading us to hope against hope that history doesn’t repeat itself.

When and if the vaccine arrives, it won’t be soon enough to save Hilda Churchill. The charismatic British woman, days short of her 109th birthday, died of mild symptoms of COVID-19 on March 29. She survived the 1918-19 pandemic, which killed her 1-year-old sister.

The century-ago pandemic (some say it continued through 1920, though this story will use the timeline provided by the National Vaccine Information Center) was caused by “an H1N1 virus with genes of avian origin,” per the U.S. Centers for Disease Control and Prevention. It was particularly distinguished by a high number of deaths in the 20-40-year age group.

This was a flu pandemic. COVID-19 is not the flu. But this passage from the CDC sounds eerily familiar:

“While the 1918 H1N1 virus has been synthesized and evaluated, the properties that made it so devastating are not well understood. With no vaccine to protect against influenza infection and no antibiotics to treat secondary bacterial infections that can be associated with influenza infections, control efforts worldwide were limited to non-pharmaceutical interventions such as isolation, quarantine, good personal hygiene, use of disinfectants, and limitations of public gatherings, which were applied unevenly.”

That pandemic—often called the Spanish flu by the U.S. mass media, although it did not originate in Spain and was not contained to Spain—begat more research on the virus. The National Vaccine Information Center (NVIC) reports that in 1933, Influenza Type A was isolated in ferrets; three years later, Type B was isolated and an Australian scientist discovered that the virus could be grown in embryonic hen eggs.

Enter Jonas Salk and Thomas Francis, University of Michigan researchers who created the world’s first modern flu vaccine in 1938 by using fertilized chicken eggs and an inactivated strain of the Influenza A virus.

The heralded vaccine was given to U.S. soldiers during World War II. But its effectiveness was limited: A 1944 study of the vaccine revealed that it helped reduce illness in people with a temperature above 99 degrees Fahrenheit, although a 1947 evaluation “found no difference in health outcomes between those who were vaccinated and those who were not vaccinated,” according to the NVIC.

(Salk’s mixed success with this vaccine preceded another groundbreaking discovery of far more impact: his vaccine for polio. In the years after that vaccine was released in the United States in 1955, polio cases reduced in America from 18 to fewer than two cases for every 100,000 people.)

Inventions and innovations aimed at eradicating viruses have met with mixed results during the past century.

Although human innovation and technology have landed a man on the moon, developing prompt and effective vaccines for viruses could be an ongoing challenge.

No one institution can develop a vaccine on its own, and the stages of the process are longer than many people can fathom—starting with understanding the virus’s characteristics and behavior, then developing an animal model.

After that, scientists must develop a vaccine that will trigger the right parts of the body’s immunity without doing damage. There is pre-clinical testing, clinical testing, cooperation among various agencies, and regulatory approval—all of which takes hundreds of millions of dollars.

“What would make a great vaccine for coronavirus is one that you can make quickly and one that would provide long-lasting and effective immunity,” Dr. Kathryn Stephenson, who runs the clinical trial unit at Beth Israel Deaconess Medical Center’s Center for Virology and Vaccine Research, told the Los Angeles Times. “Those are not always the same thing.”

It’s a challenge that is much older than Hilda Churchill was.

Andrew Moyer was granted a patent for a method to mass-produce penicillin.

Discovered by Scottish bacteriologist Alexander Fleming in 1928, penicillin has been effective in treating serious bacterial diseases.

Moyer was working at the United States Department of Agriculture’s Northern Research Laboratory when he found he could increase yields tenfold if a penicillin mold was cultured in a broth of corn steep liquor and lactose. He was posthumously inducted into the National Inventors Hall of Fame in 1987, the first government researcher so honored.