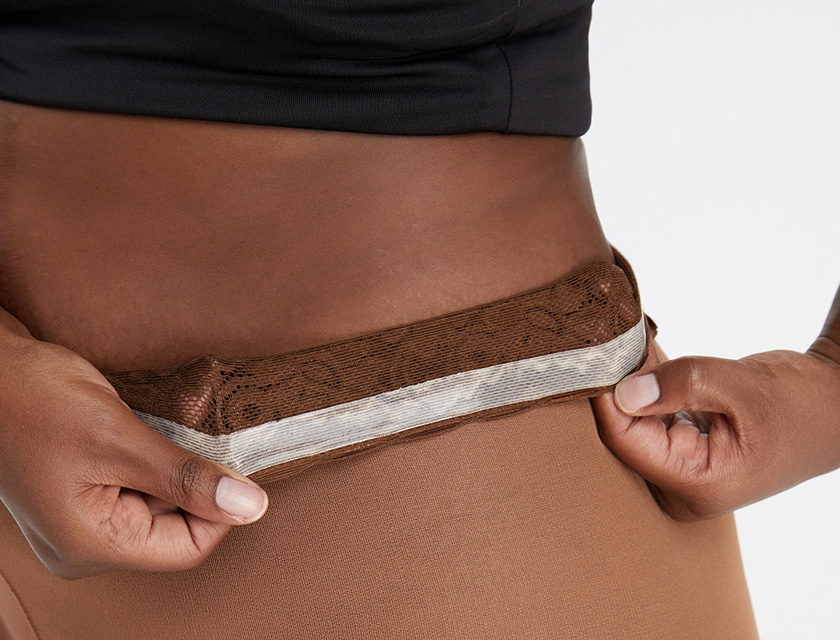 Laura McGuire, inventor of Hipstik, said constantly pulling up her tights during the workday “was like picking your nose in front of your boss.”

Laura McGuire was a reluctant inventor, but for the sake of other women she felt obligated to come up with a product that was literally the right fit.

McGuire understood the problems of traditional hosiery not only because she wore tights and pantyhose, but because she was also tasked with selling them at her department store job. She would often cut the waistband from her hose to relieve the pressure of a control-top waist yet found herself embarrassed when having to pull up her tights during the workday.

“It was like picking your nose in front of your boss,” she said.

Working as a sales associate at Dillard’s, she heard similar complaints from women about the experience of wearing them and of buying them.

“They were hating their purchase. It was a grudge purchase.

“It was like, ‘I can’t believe I have to buy this, but I have to buy it for an event. I am not going to be comfortable. It is too expensive. I cannot find the right fit.’

Her husband, Jason, also knew of her frustration. As she changed into her pajamas one night, he saw the scissor-cut down the front of her pantyhose. Laura told him they were so uncomfortable that she cut them in the bathroom at the office.

Years later, she found the solution via a line of hosiery she calls Hipstik. It combines traditional tights and pantyhose with a lace waistband that are designed to be comfortable for all-day wear. The waistband is soft and stretchy to conform to all body types, with a silicone strip around the inside of the lace to keep the hosiery from sliding down.

Hipstik comes in seven different sizes, with many colors to match almost any wardrobe. The sizing chart uses height and body shape instead of the traditional height and weight so women can find the perfect fit.

Laura McGuire bought more than 90 different pairs of hosiery and tested them to see whether there was anything on the market that was comfortable during a workday or would stay up and not roll the waistband. Although she even bought pairs from Australia for her research, nothing worked how she wanted.

She said she doesn’t sew very well but did know how to use scissors, so she made early prototypes by cutting and amending the existing product. She eventually found that although the waist compression was the source of the discomfort, if you took too much of it away, the hosiery would fall down. So she decided to focus on making a better waistband that would be lacy and comfortable.

McGuire lives in North Carolina, the hub of U.S. hosiery manufacturing and innovation. She took her idea to specialists at the Manufacturing Solutions Center in Hickory.

The center directed her to three factories that might be able to help, but it was far from straightforward.

“I quickly realized that the machinery that is used to make hosiery products has not changed at all … in decades,” McGuire said. “That is one of the reasons there had not been much innovation.

“When I went to these manufacturers, they were like, ‘We have never made anything like that, and I don’t think our machines can make that.’”

Fortunately, one of the factories was interested in helping with the product and modifying its process.

It made the product from foot to thigh on a traditional knitting machine and followed with a secondary sewing operation to add the lace waistband. The factory also found that adding a silicone strip on the inside of the waist helped hold up the garment and maintain comfort.

Patent protection for clothing can sometimes be difficult, and McGuire found this to be true. She was unable to get a utility patent for the Hipstik technology with her attorneys after years of back and forth with the United States Patent and Trademark Office.

Although there was no existing patent that covered the totality of her innovation, her bid was rejected based on pieces of prior art that were stitched together from multiple existing patents. This has not stopped her mission or her business; instead, she is using her story and brand reputation as her intellectual property.

Within a few months of beginning development, McGuire had a product ready to sell and launched Hipstik on Kickstarter in late 2016. Her husband (the company cofounder) chipped in with the web design, logos and digital marketing content, and the couple ran the campaign on their own.

They did not reach their funding goal, but they already had product in hand and were able to direct their backers to the ecommerce site where they could purchase the product directly. Despite the failure of the crowdfunding campaign, Laura still considers the effort as a success because many of those initial backers became lifelong customers.

Since its initial launch, Hipstik has garnered praise and many accolades. Real Simple named Hipstik a Best Product of 2018; Good Housekeeping said the product was one of the Best Tights of 2019.

McGuire has also kept innovating her product line by adding colors and styles, and creating anti-chafing undershorts that use her unique waistband innovation. She is also working on some new concepts in hopes to continue to add comfort to women’s wardrobes while adding products.