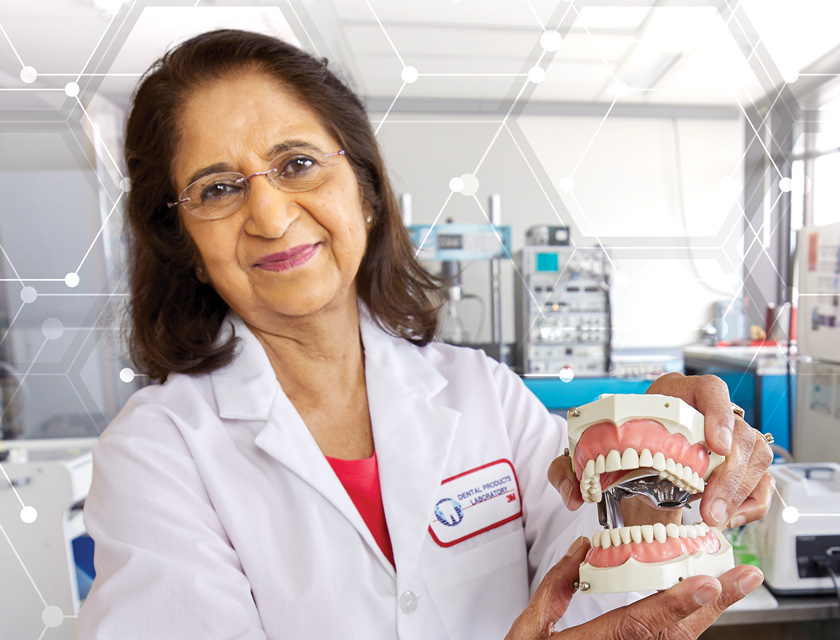 “It restores people’s smiles and improves the quality of their lives.”

When it comes to blending things together, Sumita Mitra stands apart from the rest.

The Indian-American chemist and 2018 National Inventors Hall of Fame inductee developed technology that revolutionized the making of dental fillers, a process still used by dentists two decades later. She recently received a 2021 European Inventor Award by the European Patent Office for her application of nanotechnology in dentistry.

Dental products based on her invention have been used in more than 1 billion restorations worldwide.

For centuries, dentists relied on flawed combinations when making dental fillers—either too weak, too unattractive, or both—until Mitra and her team got it just right.

Until the late 1990s, dentists’ attempts to perform natural-looking tooth repairs relied on a combination of two separate materials.

Microfills were aesthetically pleasing but too weak to be used for stress-bearing regions of the incisal edges and for filling teeth toward the back of the mouth.

The other type was stronger but less attractive hybrid and microhybrid composites that lose their shine and became rough from brushing and chewing. This was inconvenient and expensive for dentists and their patients.

While working in the Oral Care Division of 3M, “I wanted to create one material that would be strong, durable and also have the long-lasting lustrous beauty of natural teeth,” Mitra told Inventors Digest. “I realized that the key problem was the limitation of the existing filler technology used to reinforce dental composites.”

She took advantage of the fact that nanotechnology was an emerging science around that time, figuring that developing nanoparticle technology for use as dental fillers could resolve most of the problems and provide a universal filling material.

But as with many inventing processes, success was not immediate. The plan had holes to fill in.

“Our initial approach was disappointing, since it did not provide all the desirable characteristics we had set as our goal,” Mitra said. “But eventually I came up with the idea of making clusters of loosely bound nanoparticles, which we called nanoclusters, and combined them with individual nanomeric particles to provide a blend that we incorporated into a dental resin to make the dental composite.

“We also had to design the manufacturing technology for scaling up the process of making the nanomers and nanoclusters. The entire process from conception to commercialization of 3M™ Filtek™ Supreme Universal Dental Restorative took us about three years.”

Mitra said her biggest obstacle was getting the handling property of the composite to dentists’ satisfaction: “This is where the invention of the nanoclusters and its combination with nanomers was so vital to solving the problem.”

Her first patent describing the use of nanotechnology in dental composite was issued in 2002.

“It was a very momentous event for me,” she said. “The issuance of the patents validated the novelty and utility of our work and allowed us to go forward with the commercialization process.”

“Some of these were in increasing the radiopacity (the state of not being transparent in X rays or radiation); others were in increasing the opalescence (varying colors) of the cured composite. These inventions have enabled us to make a family of nanotechnology products for a wide variety of dental applications.”

Her description of the invention’s ultimate benefit is devoid of scientific processes or terminology: “It restores people’s smiles and improves the quality of their lives.”

Mitra’s induction into America’s inventor hall of fame—on the heels of a sterling 32-year career at 3M during which she rose to corporate scientist, the highest technical position at the Saint Paul, Minnesota-based multinational conglomerate—is heady stuff for someone who was immersed in brainy pursuits even as a child a half a world away.

Growing up in Kolkata, India, “I would often visit my father, who was a chemist, and peer over his shoulders while he did his experiments,” she said.

“From a very early age I was fascinated with materials—rather, the difference between various materials. For example, what makes pencil different from paper? Why is our skin different from our hair?

“Soon I learned that it is the chemistry of each material that gives it the distinguishing features. It is all in the molecules. I was determined to study chemistry and make it my career.”

Following a year of postdoctoral work at Case Western Reserve University, she joined 3M Corporate Research Laboratories in 1978 and began her long and heralded career there. From 1999 to 2010—the latter also the year she retired from 3M—she also was the industrial director of the Minnesota Dental Research Center of Biomaterials and Biomechanics at the School of Dentistry, University of Minnesota.

She is currently a partner at Mitra Chemical Consulting LLC, an independent consulting firm she co-founded.

Mitra has 100 issued U.S. patents. Most are novel chemical compositions for a variety of applications; some are also related to devices for dental, imaging and other applications. Many of the U.S. applications also have corresponding EPO patents (58 issued), as well as patents in other countries where 3M does business.

She says the most important benefit of her accomplishments and honors is the ability to help her “be a role model for aspiring scientists to pursue careers in STEM fields. To this end, I work closely with several organizations.

“One of them is the National Inventors Hall of Fame in the U.S. I help to promote and evaluate their Collegiate Inventors Competition. I am also actively involved in their Camp Invention Program, where we work with young children and encourage them to think differently, to explore, and to be creative.”

Her advice for students, especially those pursuing a science career:

“The best thing we can do for students is to inspire them to explore the world around them, to be curious, try out their ideas and not be afraid to think differently. Their first attempts may not work, but that failure should never be a deterrent to try a different pathway.

“We always learn from our failures. There will be roadblocks along the way, but then we just have to take a detour and try out a different pathway to achieve our goals.”

A Lifetime of Achievement

Research: Robert N. Grass and Wendelin Stark (Austria/Switzerland)
The pair developed a novel method of preserving data converted into genetic code using artificial fossilization in tiny glass spheres. They created a storage format with the potential to protect valuable data for millennia, as well as a robust DNA barcode: When their minuscule particles are applied to products, they ensure that specific indicators, such as the origin or working conditions, are traceable throughout the supply chain.

Small and medium-sized enterprises: Henrik Lindström and Giovanni Fili (Sweden)
From their plant in Stockholm, the inventors produce a dye-sensitized solar cell using a new electrode material with very high conductivity that can be custom printed in almost any shape or color—and can even generate electricity indoors. The cells are being integrated into various electronics to create self-charging devices.

His OLEDs provide enhanced image brightness, color resolution and power efficiency in electronic devices. Half of the world’s smartphones and many types of ultralight organic solar cells incorporate his technology.

Popular Prize: Gordana Vunjak-Novakovic (Serbia/USA)
Her advances in tissue engineering won the prize, awarded to one of 15 finalists through an online public vote. The EPO received about 27,000 votes for 15 finalists.

The European Patent Office has established the Young Inventors prize. From students to entrepreneurs, the global award is open to various innovators ages 30 and younger, recognizing sustainability-driven initiatives across all technical fields.

Unlike the current categories, a granted European patent is not a pre-requisite and the award is not limited to individuals with EPO Member State nationality. Young innovators around the world can participate.