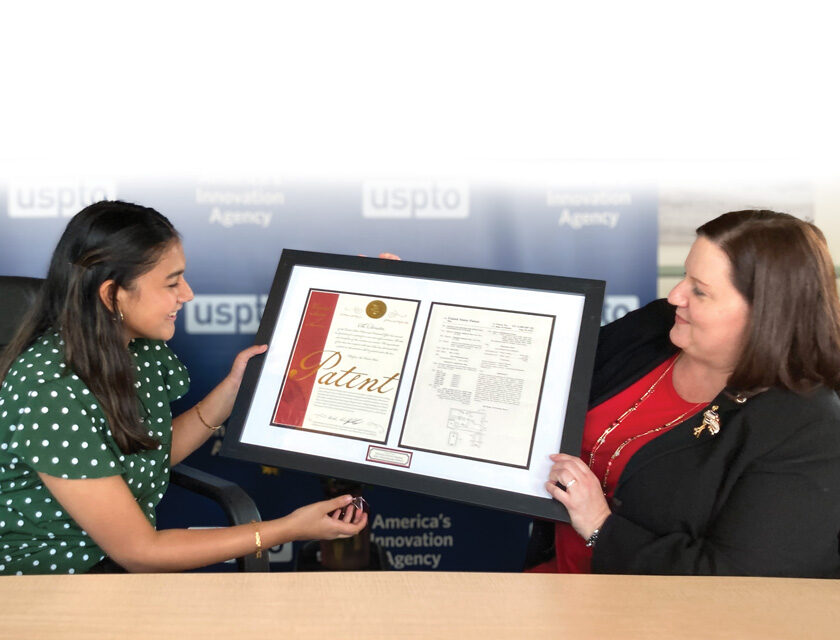 At 15, Gitanjali Rao has already given so much to this world. Now it was time for her to receive a surprise gift.

Molly Kocialski, director of the USPTO’s Rocky Mountain Regional Office, reached behind a screen during an interview with Gitanjali on the first day of the USPTO’s recent Invention-Con 2021. She presented her with a beautifully framed display that people three, four, and five times her age would love to have.

It was her first patent.

The presentation to Time magazine’s first Kid of the Year in 2020 was a signature moment of this year’s Invention-Con, a USPTO celebration August 18-20 that featured special student programming. The 15-hour online event captivated more than 1,000 hopeful and confirmed inventors and entrepreneurs who registered. All were treated to a showcase of innovation, instruction and inspiration.

Gitanjali had been officially granted her first patent the previous week, on August 10, for a device that can detect lead in drinking water. Now an incoming junior at STEM School Highlands Ranch (Colorado), she was 11 when she learned about a contaminated water crisis in Flint, Michigan.

She eventually designed a device that uses an arduino processor and carbon nanotubes to detect lead before sending a report to a smart phone app. Gitanjali told the USPTO’s Kocialski that she has always wanted to help people. After conceiving and working on her invention, applying for a patent was the next logical step.

“One of my thought processes was, ‘How do I secure my ideas? How do I secure what I’ve come up with—this process that I’ve created?’” And that’s where the idea of applying for a patent came from.”

Gitanjali was among several young people whose stunning innovative minds and enthusiasm were on display. Fifteen-year-old Bishop Curry, who invented a device to help prevent hot car deaths, said he routinely gets up in the middle of the night to write down ideas. Twelve-year-old patentee Jennifer Wen, who with her 17-year-old brother Brian Wen invented a type of bookmark with Velcro that marks the last word read in a book, and said she wants to become a patent attorney.

Instruction was a recurring theme in the event, including tutorials delivered by USPTO and national intellectual property experts on establishing and protecting patents, trademarks and copyrights. Workshops covered issues ranging from building a brand to public relations to plant patents.

Virtual attendees were also reminded of the numerous resources available to them including pro bono services and recurring online classes involving patents, trademarks and how to bring your product to market.

NaThanya Ferguson, a supervisory innovation development program manager in the USPTO’s Office of the Chief Communications Officer, discussed those resources in her concluding remarks. “Right after you have that ‘aha!’ moment, think of us—your USPTO,” she said.