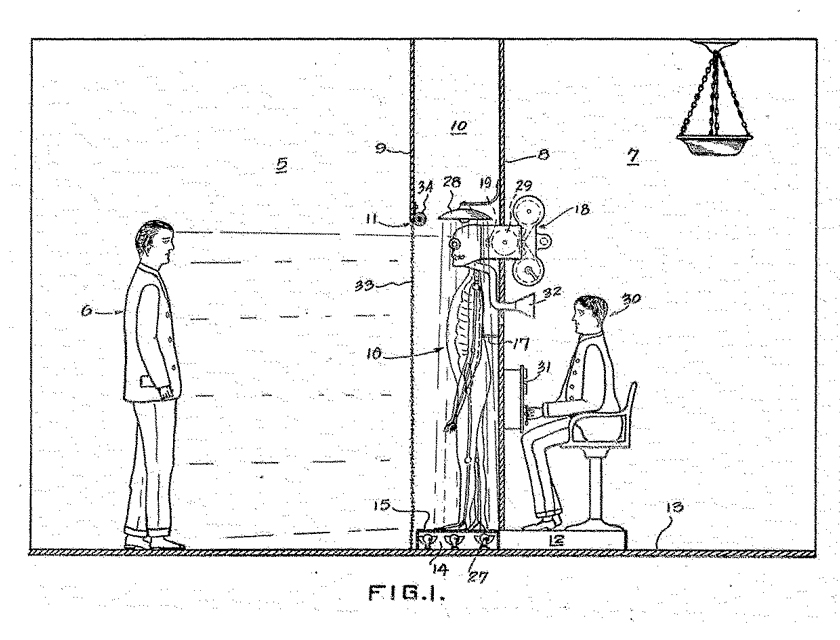 Skeleton meant to scare criminals had a Halloween feel to it

It was an invention idea straight from a Halloween movie: a skeleton with glowing red eyes and a presumably eerie voice, designed to elicit photographically recorded confessions from criminals. But Helen Adelaide Shelby’s concept was never put to use, as examiner concerns at the then-United States Patent Office foreshadowed possible issues that were later confirmed by a U.S. Supreme Court justice named Felix Frankfurter.

Hot dog! This story has all the makings of a USPTO classic.

Shelby, of Oakland, California, titled her 1927 patent application “Apparatus For Obtaining Criminal Confessions And Photographically Recording Them.” Her written description:

“The present invention relates to a new and useful apparatus for obtaining confessions from culprits, or those suspected of the commission of crimes, and photographically recording these confessions, in the form of sound waves, in conjunction with their pictures, depicting their every expression and emotion, to be preserved for later reproduction as evidence against them.”

The suspect, isolated in a small, dark room, would be asked questions from an unseen interrogator whose voice was coming from the skeleton’s mouth through a megaphone.

Shelby explained in her application, “It is a well-known fact in criminal practice that confessions obtained initially from those suspected of crimes through ordinary channels are almost invariably later retracted.” Her premise was that the apparent presence of a ghastly figure would scare suspects into making a permanent confession—i.e., that the spirit would move them.

Not surprisingly, the detailed and illustrated 44-page USPTO case file shows plenty of back-and-forth between Shelby and examiners. Most notable is an examiner’s notation to delete the entire fifth paragraph of her original description, which read:

“In practice, my system of obtaining the confessions of criminals is a legitimate and humane one, freed from all possibility of a charge of intimidation being afterward made against the authorities, since the criminal, his surroundings, and his evidence and movements to the minutest detail are faithfully photographically recorded, to be later reproduced at his trial.”

Many other claims in the application were questioned or outright rejected. One examiner wrote: “Claims 11 through 14 are rejected as not defining invention. Recording a confession uttered by a suspect simultaneously with taking his picture while he views a “skeleton” or other object would not amount to invention. The recording process is the same whoever the subject is or under what conditions it is recorded. Frightening the subject is not a patentable process.”

There is no evidence that her skeleton contraption was ever constructed, but it might not have mattered because of the iffy nature of her concept. Ultimately in 1961, Justice Frankfurter wrote in Rogers v. Richmond that even if a confession were true or reliable, it should be excluded from admission in evidence if involuntary or coerced.

Little is known about Shelby. Research shows she sold and leased properties in Oakland, San Francisco and Santa Cruz, California. She died in 1947, but her one patented invention lives on in creative spirit.