Your USPTO: MAGIC MOMENT – Its Time Had Come 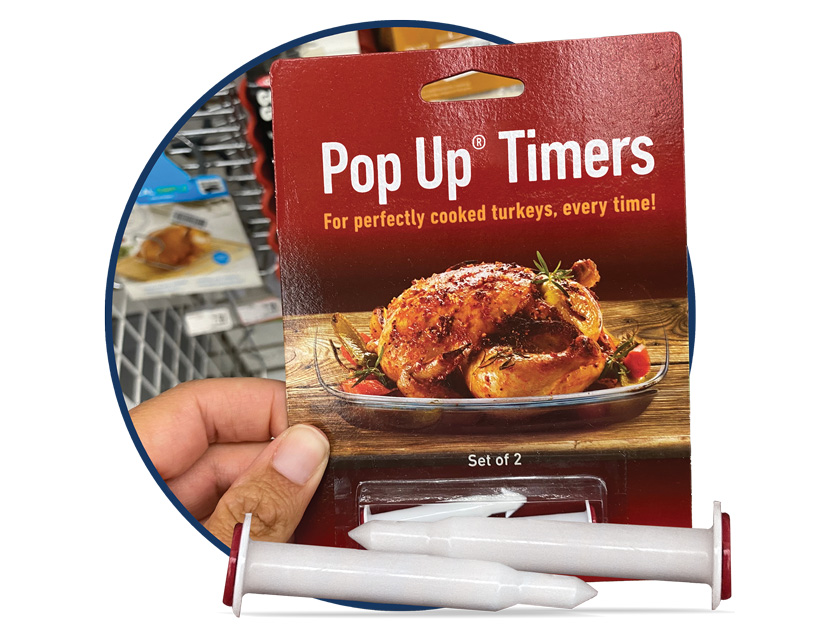 George (Goldie) Kliewer applied for and eventually received a historic patent in the 1960s because his inventing group believed turkeys weren’t the only ones in potential danger at Thanksgiving.

Determining the cooking temperature at which the bird was safe for human consumption used to involve guesswork. Just because the turkey was warm enough in one part did not mean it was safe for eating. There was also the problem of overcooking.

Although the company that is the leading seller of pop-up cooking timers today estimates it sells about 30 million units annually during the Thanksgiving holidays, the device is not universally embraced—and its history is the source of some half-cooked information.

The patent for Kliewer’s pop-up cooking timer, issued on Oct. 25, 1966, was assigned to Commodity Marketers, Inc. The application was filed in 1963.

Commodity Marketers was a small inventors group that included Kliewer, an incessant tinkerer who raised turkeys on the grounds of an abandoned airfield near Fresno. He was also a member of the California Turkey Producers Advisory Board.

Kliewer’s son, Steve—who as a teenager helped his father test inventions and was named on several patents—was quoted in a blog post by Judythe Guanera of Grover Beach, California:

“Anyone with a background in ranching or farming knows that there are lots of expenses incurred and little capital to cover them, in this case, until the turkeys were sold. Since Thanksgiving was the biggest sales time of the year, the rest of the year money could be as tight as a knot in a shoelace. It was critical for cash-strapped ranchers to be clever in designing tools and other necessities.”

The original concept for overhead automatic sprinklers relied on heat from a fire melting a metal alloy plug, which caused water to rain from the pipes above. According to insidescience.org, Kliewer wondered whether a similar principle could determine when the temperature inside a turkey reached the right level.

His group’s original design was patented in 1961. It features an outer housing that can be inserted into the meatiest part of the bird, an inner rod that pops up, a spring that is placed underneath the rod, and a pin that keeps the spring depressed.

The pin, which could be a metal or wax, is selected to melt at the desired cooking temperature—the same principle as in the overhead sprinkler. This releases the spring and pushes up on the rod, indicating that the turkey is ready to eat.

Guanera wrote that the concept eventually led to 10 separate patents under different names. The company was eventually sold to 3M, which eventually sold its pop-up business to one of the largest producers of the devices, Volk Enterprises.

Foodies and chefs in particular aren’t always fans of the timers, preferring thermometers. Consumer Reports says some timers can pop before they reach the USDA-recommended safe cooking temperature of 165 degrees Fahrenheit.

Kliewer’s legacy has taken another hit in the past 15 years. If you type “Who invented the pop-up turkey timer?” into a major search engine, you will get the name Eugene Beals.

In a 2015 Beals obituary, the San Francisco Chronicle reported that he was the inventor of the device. This was despite the fact that Beals had no registered patents and Kliewer had several, all relating to the timer. The story quoted Leo Pearlstein, who with Beals and Kliewer was part of the original group that brainstormed the timer.

Pearlstein said Kliewer came up with the concept based on fire sprinklers, but Beals executed the idea. The story also misidentified Kliewer as Goldy Kleaver. Other media, including a Los Angeles Times blog post, repeated the misinformation.

When the Washington Post featured a story about the pop-up timer in 2015 and contacted Pearlstein, he did not know that Kliewer was credited as the inventor until the story’s writer told him.

Kliewer’s passing was not reported in any major publications. But his contributions to happy Thanksgivings return every year.