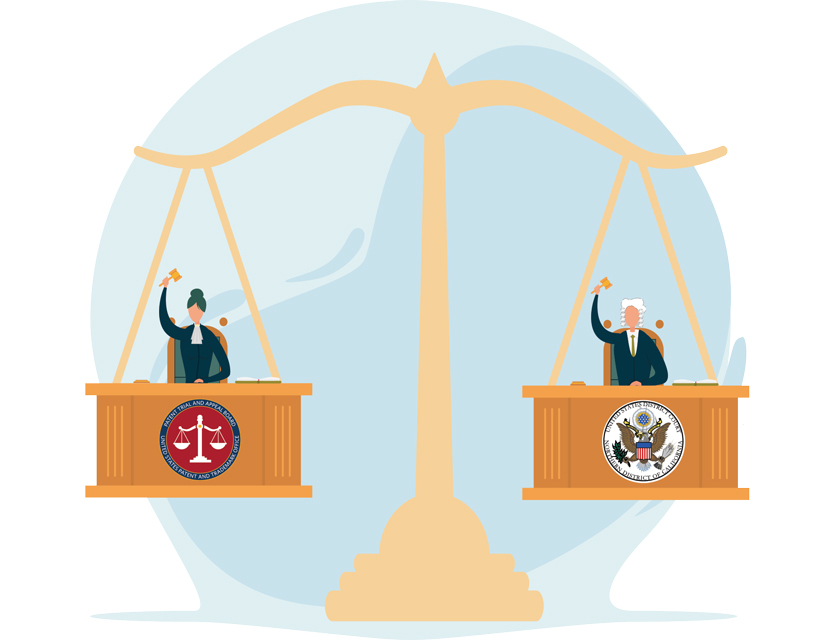 Which tribunals rule on a patent’s validity in the United States? And which decide on infringement or damages?

In the United States, the Patent Trial and Appeal Board (PTAB) and the U.S. district courts adjudicate patent validity. But only the courts address infringement and penalties.

Because patents are economically important and patent litigation often comes with high stakes, it is important to understand the major ways in which these tribunals are similar and different.

The PTAB was formed by the 2011 America Invents Act within the U.S. Patent and Trademark Office. Administrative patent judges decide cases at the PTAB. They are required to have a technical and legal background and are appointed by the secretary of commerce.

The PTAB adjudicates the patentability of issued patents in AIA trial proceedings, during which a third-party challenger files a petition arguing that an issued patent’s claims are unpatentable. The patent owner, whether a company or person, can defend its patent. If the PTAB rules in favor of the challenger, the USPTO director cancels the unpatentable claims.

District court judges, though trained in the law like PTAB administrative patent judges, might not have a technical background. A few do, but most do not. In a jury trial, 12 members of the public from various backgrounds—technical, non-technical, legal, and non-legal—decide patent validity.

These courts determine infringement, and can award injunctive and monetary relief as damages. There are two kinds of district court proceedings in which patent validity may arise:

Because the PTAB cannot hear patent infringement allegations, it is common to have parallel proceedings in which patent validity is adjudicated simultaneously before the PTAB and a district court. In fact, approximately 85 percent of PTAB cases involve a patent subject to concurrent district court litigation.

To bring a civil action in district court, a party must have Article III standing: That is, the party bringing suit must have an injury that is traceable to the defendant and can be redressed by a favorable court decision.

There is no Article III standing requirement in AIA trial proceedings at the PTAB; any third party may challenge a patent.

The district courts and the PTAB both employ standards of review when deciding patent validity. But the standards are different.

In district courts, patents enjoy a statutory presumption of validity, so challengers must prove each patent claim invalid by clear and convincing evidence—the highest burden of proof in U.S. civil litigation. To secure institution of a trial in an AIA trial proceeding, the challenger must show a reasonable likelihood that at least one claim in the patent is unpatentable. Then, if the trial is instituted, the challenger must prove each patent claim unpatentable by a preponderance of the evidence.

The reasonable likelihood and preponderance standards are lower than the clear and convincing standard used in district courts.

Before the district courts and the PTAB, the parties may conduct discovery.

Finally, per statute, the PTAB will issue a final written decision within 12 months of instituting a trial. The district courts are not under any statutory timeline and may take much longer than the PTAB to issue a decision. The length of time for a district court decision can range from several months to several years.