Are You An Entrepreneur? 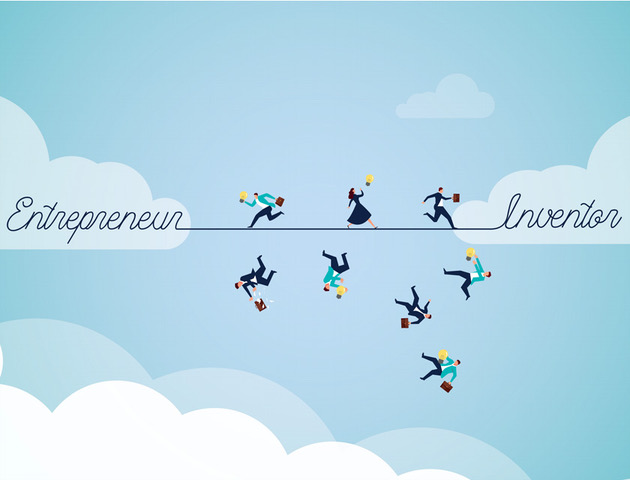 To know if you have what it takes, you must know who you are

Those who believe they have sufficient discipline to take on the role of entrepreneur, even though their heart is with inventing, may ultimately fail.

My old granny often spoke in old sayings. “All that glitters is not gold” was one of them. (Actually, Shakespeare used it in his play, “The Merchant of Venice.”) And many inventors bear witness to that truth.

We imagine a great invention, rush to conclude a patent search, and discover that our invention was preceded by another inventor—perhaps in 1999 or before. It happens more frequently than finding our way clear to file for a patent on the basis of what we first believe to be our novel claims.

In this case, so long as the prior patent has exceeded its 20-year life, you are free to produce and sell the other inventor’s invention. The decision to produce or not depends on your objective. Do you want to become an entrepreneur, or do you want to remain an inventor and go on to your next invention?

So, how do you decide? First—and this is very important—you must know your own personality, not be sucked in by vague dreams or false hopes, and know the core that guides you. We are all born with certain skill sets that took root in our genes, our DNA, during our 90,000 years as modern Homo sapiens.

Psychologist Abraham Maslow said this about personality: “When we ask what a man wants out of life, we deal with his very essence.” This essence took root when we lived in tribes as modern Homo sapiens (wise humans).

At some point, we discovered that the division of labor into specialties significantly increased tribal efficiency. And evolution, which will mindlessly grab hold of any tactic that works to perpetuate the species, co-evolved specialists to fulfill the divisions of labor.

For example, a specialist invented the stone tip to improve the less effective wooden spear. Humans also invented attaching it with pitch, and binding it with sinew. The labor division we might broadly call the artisan was fulfilled by the specialist who today we call the inventor.

The point is that if your “essence”—your archetype—is that of the true inventor, it is deeply embedded, not some fickle brainstorm that may or may not visit you in the future.

Psychologist Carl Jung states it this way: “They (the archetypal forms) are ineradicable, for they represent the foundations of the psyche itself.”

I’m not trying to convince you that you should not choose the entrepreneurial option. I merely want to emphasize that the importance of your success will depend heavily on your truest essence.

The role of personality

Let’s examine the entrepreneurial essence. The tribe needed a person who could define a goal, plan to achieve it, schedule the intermediate steps, and carry out the mission.

Of the 12 archetypes that Jung defined, the alpha male or alpha female appears to fit entrepreneurship best.

Many inventors work alone, but the successful entrepreneur more often forms a team—Steve Jobs and Bill Gates, for example. Sometimes the team is a single partner at the start, but even in sole proprietorship, an association with accountants, vendors, and sellers becomes a kind of loosely affiliated team.

I suspect that the alpha personality is less common than the artisan. A tribe having an optimum size of 150 needed only one alpha (usually a male) to lead it, but it may have needed several artisans to keep up with making and improving spear and arrow tips, spear shafts, bows, atlatls, hide scrapers, axes, cooking vessels, needles, etc.

Thus, the inventor personality may have evolved to outnumber the entrepreneurial personality.

If my assumption is correct, true entrepreneurs may be significantly fewer than true inventors. And the inventor who impulsively decides to embark on the entrepreneurial option without a realistic assessment of his or her innate personality is likely headed for failure.

Also, those who believe they have sufficient discipline to take on the role of entrepreneur, even though their heart is with inventing, may ultimately fail. Philosopher Friedrich Nietzsche said, “Our vanity desires that what we do best should be considered what is hardest for us.” Vanity is not a legitimate mentor.

Is there any practical self-analysis we can count on to reveal our entrepreneurial qualities? That’s a tough question.

I can speak from personal experience, but I’m not sure that applies to everyone. I came up with my first invention when I was about 10.

My mother had a heavy, cast iron frying pan. She complained that it was too heavy to serve from, so I invented a thin metal disk with holes in it and a handle. She was supposed to lift the food out using the insert.

I didn’t explain how to prevent the grease from dripping through the holes onto the table or floor, however. It wasn’t a practical invention, of course. Neither are a lot of items invented by mature persons.

Anyway, I went on from there, inventing all kinds of impractical things until I invented a thermally conductive mounting means for high power transistors, U.S. Patent No. 3,820,592. This device enabled my employer to win a naval contract for power supplies used on the DD963 destroyers.

My story does not end there, however. I had dreams of starting my own business in order to have a facility in which to manufacture products that I would invent and produce. I planned for a small factory, a.k.a. a job shop, that would produce precision sheet-metal parts for electronics manufacturers.

I bought machinery on credit, borrowed $5,000 from a relative, combined it with my own savings, and formed Shortrun Precision Fabricators in Laverne, California. What I had overlooked was that the demands of running a job shop that had up to 12 employees left almost no time for inventing or developing proprietary products.

True, I had developed three novel products, but I failed miserably at marketing them. There was no Amazon in those days.

After five years of meeting payrolls, and even though the business was reasonably successful, I had become dissatisfied. I unexpectedly received an offer I couldn’t refuse. I sold the business and went back into product development engineering and manufacturing engineering.

I had learned the hard way that on the spectrum of inventor at the left end and entrepreneur at the right end, I leaned well left of center.

My experience is not suggested as a model to help you decide whether or not to produce and sell. But if I had thought more seriously about whether I had the right stuff to be a producer first and inventor second, I may not have been tempted to start a job shop.

However, I have noticed certain traits about inventors and entrepreneurs that might be of some help to you.

I recall long ago reading a book written by Joseph Sugarman, a very successful mail-order seller. He claimed that he cleared his desk every evening before leaving for home. (That should have been a clue that I should stick with inventing. My desk must have papers from at least a decade ago at the bottom of the pile.)

So, are all entrepreneurs neat? I suspect they are, but I don’t know. Still, they probably always remember birthdays and anniversaries; never forget a doctor’s appointment; have the latest iPhone with entries of appointments six months in the future; shave every day whether or not they’re going to meet anyone; and mainly have no preconceived affection for any certain product.

The thrill of producing, selling and earning a profit because strangers buy whatever it is they have to sell is their main incentive in life.

Inventors, on the other hand, are generally not neat about their workspace; they lose track of time, even days; they might wear socks that don’t match, if a man; lunch time has a range of about six hours; they hate to hear the phone ring; have been known to make a prototype before doing a patent search; carry a purse the size of an overnight bag, if a woman; and given the choice in a licensing agreement between $5,000 upfront and a national publicity article about their invention will choose the latter. (We live for validation.)

You’ll recall that bit above about all that glitters is not gold. But Shakespeare also wrote, “This above all: to thine own self be true.”