Death by Inventing: The Mystery of Flight 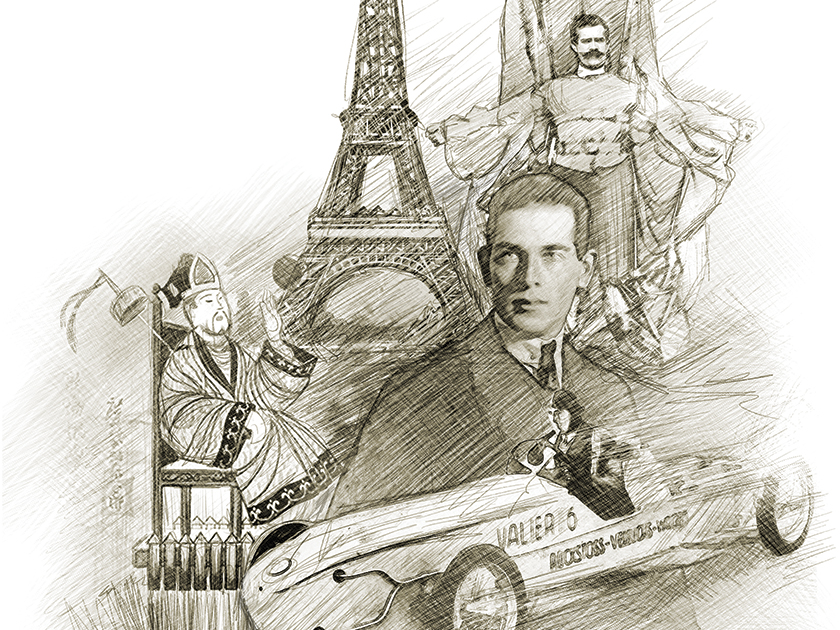 Nobody told Franz Reichelt to go take a flying leap. It was his idea.

Leaping from a roof while wearing two wooden wings is the definition of crazy, but that shows how determined humans were to conquer the mystery of flight.

One of the earliest documented attempts was made by Abu Nasr Isma’il ibn Hammad al-Jawhari, a Turkic lexicographer and theologian who is best known as the author of an influential Arab dictionary in the 10th century. Its title, translated, was “The Crown of Language and the Correct Arabic.”

He jumped from the roof of the Nisabur Mosque. None of his dictionary’s 40,000 entries can adequately describe the result.

In Part 2 of our series on Death by Inventing, we focus on accomplished and would-be innovators who were unable to achieve what Orville and Wilbur Wright eventually mastered.

In the 1900s, the story of this legendary Chinese emperor’s attempt at rocket-propelled flight resulted in his being called the world’s first astronaut. But many are skeptical that the experiment took place.

The story goes that on the emperor’s command, attendants carrying torches simultaneously lit the fireworks. Wan’s chair rocketed into the sky, only to explode in a ball of flame. The emperor disappeared forever.

By the mid-1900s, many authorities on flight were debunking the incredible tale. In 2004, the TV show “Mythbusters” tried to re-create Wan Hu’s flight, using materials that would have been available to him at the time. The result: The chair exploded on the launch pad, the crash test dummy showing what would have been critical burns.

It is possible that Wan Hu had access to rockets; their use in China had been reported as far back as the 1200s. Regardless, the legend endures amid skepticism. A statue of Wan Hu stands at the Yionang Satellite Center in mainland China, and the Soviets named a lunar crater for him in 1966.

Valier was also fascinated by rockets and their potential. He had experimented with off-the-shelf powder rockets on items ranging from sleds to race cars when he helped found the German Verein für Raumschiffahrt (Spaceflight Society), a kind of amateur rocket association. Members performed important developmental work on liquid-fueled rockets.

Valier tested his first liquid propulsion-based rocket car in January 1930. According to Popular Science, Valier’s setup “centered around a standard combustion chamber, a steel tube with an upward-facing exhaust nozzle on one end and a propellant injector in the other. Liquid oxygen was fed into the chamber by small bores, its flow rate managed by a resistance disk that disrupted the flow. Fuel was introduced into the combustion chamber in the face of the stream of oxygen by opening a valve attached to its container.”

Here’s where the danger began: “Once the fuel and oxidizer mixed, they were lit with a blowtorch. The flame roared upwards, exerting a downward force that corresponded to thrust.”

Fuel and oxygen were introduced to the chamber by opening valves by hand, a risky endeavor at best. Pressure built as the valves were opened more. Valier typically sat directly in front of the combustion chamber with no protection.

On May 17, 1930, Valier—assisted by Walter Riedel and Arthur Rudolph—conducted a series of tests, using kerosene mixed with water in conduction with liquid oxygen. An explosion ended the third test, as well as Valier’s life. A piece of shrapnel had pierced his pulmonary artery. He was 35.

Nobody told Reichelt to go take a flying leap. It was his idea.

A French tailor and inventor who should have stuck with the former, Reichelt designed a “vêtement-parachute” (clothes-parachute) and jumped off the Eiffel Tower on Feb. 4, 1912.

How could anyone else allow this to happen? A 1912 article in a French publication said Reichelt got permission for his stunt from the Parisian Police—although they thought he would use a dummy. And when Reichelt arrived on the scene for his stunt that morning and donned his 20-lb. suit, the two friends accompanying him begged him to reconsider.

“I want to try the experiment myself and without trickery, as I intend to prove the worth of my invention,” he announced.

As members of the press watched from below, Reichelt balanced, shakily, on a stool placed on a table top for about 40 seconds, then leapt from the first stage of the tower. Video footage shows that the parachute was no match for the hurtling downward weight and was never a factor. He was killed instantly.

Pride wenteth before a deadly fall for this Frenchman, who was not satisfied with the international fame of making the first manned free balloon flight with François Laurent d’Arlandes on Nov. 21, 1783. In fact, he volunteered for that flight because he said he was determined not to let that honor go to an artisan.

He set out to be the first to cross the English Channel via balloon from the opposite direction, France to Britain. But prevailing winds that went south were a persistent obstacle.

Pilâtre de Rozier wasn’t going to be patient. According to The Ultimate History Project, he created a new type of double balloon, with a hot air balloon under a hydrogen balloon. He theorized that the extra lift would boost his altitude to a more favorable position.

He and his partner, artist Pierre Romains, set out in the pioneering contraption for what proved an ill-fated trip. Details are unclear, but speculation is that a spark from the heat source keeping the air hot in the lower balloon may have traveled up and ignited the hydrogen in the upper balloon. The two men fell to the earth and died on June 15, 1785.

Unwittingly, the disaster possibly caused another death. Pilâtre de Rozier was engaged to a young Englishwoman, Susan Dyer, who was devastated by the tragedy. Some accounts say she committed suicide; others say she died of grief.

Lilienthal’s repeated and successful gliding flights—reportedly more than 2,000—inspired the Wright Brothers and earned him the nickname “The Flying Man.” He constructed 18 types of gliders and was apparently the only person in the world who was flying often and reliably during the time the Wrights began their research.

On Aug. 9, 1896, Lilienthal attempted a test flight takeoff from a hilly location about 50 miles northwest of Berlin. According to The Smithsonian, “he took off, flew briefly, then hung motionless in midair … and plummeted to the ground from a height of 50 feet.”
A doctor determined that Lilienthal was paralyzed from the waist down but in no danger of dying. However, he died the next day; modern physicians presume it was due to a brain injury.

In 1930, his brother, Gustav, wrote a book in which Lilienthal’s last words were chronicled. “His last intelligible words are said to have been: ‘Sacrifices must be made.’ ”

That phrase, which embodies the spirit of inventing, is carved in stone over Lilienthal’s grave.