Did the Spirits Move Him? 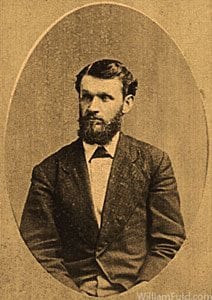 An early advertisement for “Ouija, the Wonderful Talking Board” describes the game as “Proven at Patent Office before it was allowed. Price, $1.50.” The story of how this iconic spirit board got its patent has more than medium-level intrigue.

Ouija historian Robert Murch conducted interviews with descendants of Elijah J. Bond—often credited as the game’s inventor—and of his business partners Charles W. Kennard and William H.A. Maupin to discover what sort of proof of utility was provided to the United States Patent and  Trademark Office in 1891. Those interviewed said Bond’s creativity and resourcefulness led to U.S. Patent No. 446,054.

Bond, who lived in Baltimore, brought sister-in-law Helen Peters with him to the patent office in Washington, D.C., to provide evidence that the Ouija board actually worked. Peters presented Bond as “a strong medium”—which, in 1891, probably carried more weight than it would now with regard to “one of ordinary skill in the art.” (Peters, incidentally, is the person responsible for the name “Ouija,” pronounced we-ja. Apparently, she asked the board what its name should be and the board spelled out the letters O-U-I-J-A.)

The story told by the descendants of the Ouija founders describes a demonstration before the “chief patent officer”. It is not clear whether this was the commissioner of patents at the time, Charles Elliott Mitchell, or perhaps the 1890s equivalent of a supervisory primary patent examiner. Regardless, the patent office official tested the efficacy of the Ouija board by asking the board to accurately spell out his name, which was supposedly unknown to Bond and Peters.

The three sat around a table, Peters acted as medium, and the board spelled out the patent office official’s name. As the story goes, the official was white-faced and visibly shaken. He  implemented the issuance of the patent on Feb. 10, 1891.

Although it is not the author’s place to speculate on the existence of otherworldly spirits, it should be noted that Bond was a patent attorney and may have known the name of patent office officials—particularly ones with which he would have contact. It should be further noted that the Annual Report of the Commissioner of Patents for the Year 1890 states that there were 30 patent examiners working at the patent office at that time.

The Ouija board had prior art considerations. So-called “talking boards” were being manufactured at least as early as 1868, and possibly as early as 1848. By the late 19th century, the combination of talking boards with planchettes (the part that moves on top of the board) became well known. Bond’s 1891 patent is not the first teaching of a talking board with a planchette; rather, it teaches and claims a particular type of planchette, one that became popular and allowed for the Ouija board to become a household name.

Claim 1 of U.S. Patent No. 446,054 reads as follows: “The game apparatus herein described, consisting of a board having the alphabet and numerals and certain signs and figures, arranged as shown, in combination with a table provided with legs and a pointer and operated by the hand, in the manner and for the purpose set forth.” The specific planchette design that overcame the prior art was disc-shaped with a pointer-like protrusion, and was raised above the board on legs.

The specification of Bond’s original patent states, “My invention relates to improvements in toys or games, which I designate as an ‘Ouija or Egyptian luckboard.’” But it wasn’t until 1901, when
William Fuld took over production of the board from Bond, that the name “Ouija” became popularized. Ouija is, in fact, Fuld’s trademark for the talking board.

Fuld’s name was on the back of every board, where he was the “inventor.” (Ouija researcher Murch says Bond was more of a patentee for the original board.) Fuld made variants on the original design, some of which are still in modern Ouija boards. His first Ouija-related patent was No. 479,266, issued on July 19, 1892; this variant added the usage of magnets and wires. His second U.S. patent, No. 1,125,833, issued on Jan. 15, 1915, added the more familiar transparent window to the planchette. His other two patents were both design patents, with U.S. Patent No. D56,001, issued on Aug. 10, 1920, showing the rounded triangular design for the planchette that is still in use today.

Although the inventorship—from original to variants in design—appears clear to this point, there is an interesting historical wrinkle. Despite the fact that Fuld took over the company from Bond, Fuld credited E.C. Reiche as the originator of the Ouija board.

Reiche was a cabinetmaker who had a workshop near the office of Charles W. Kennard, an assignee on the original Bond patent and one of Bond’s business partners. However, in a series of letters
to the Baltimore Sun in 1919, Kennard wrote that he was the true sole inventor of the original Ouija board. He put together a crude version of the board in 1886, using a cake board, a table and a pointer, with the alphabet and numerals marked with pencil.

Reiche made several copies of the prototype Ouija board at Kennard’s request but could not mass-produce them. Thus, according to Kennard, he shopped the concept around and met Bond, who then made several improvements on the crude initial design that included a semi-circular alphabet arrangement and the addition of felt cushions on the indicator legs.

Adding to the confusion, Fuld also claimed that he had been working on a similar talking board but Bond beat him to the patent office. Although the Patent Act of 1790 was obviously already in place, other similar historical (and often public) conflicts show issues of true inventorship did not have the same weight as in modern times. Additionally, by the time that Kennard started making his claims, the original Ouija board patent had already expired.

In February 1927, Fuld was on the roof of his Harford Street factory in Baltimore. A support post in his hand collapsed and he fell to his death. His children took over the business and began manufacturing numerous variants on the original Ouija board. In 1966, the children retired and sold the business— including the patents and trademarks— to Parker Brothers, which then sold to Hasbro in 1991, and which continues to hold all patents and trademarks for the Ouija board.

Although the USPTO has seen all manner of flimflam over the years, particularly as supposed perpetual motion and “free energy” machines, no other examples of spiritual contact as proof of utility at the patent office could be found. When it comes to patents, the Ouija board an unusual and mysterious history.

It also has a never-ending appeal. Murch, chairman of the board of the Talking Board Historical Society, credits its popularity to our relationship with death.

“Talking boards were born in a time when death was a big part of our daily lives,” he says. “Mothers lost young children to disease. When they did, they would dress up those children and have
photographs taken of their dead children to remember them by. Many Americans lost relatives in the Civil War. Some of those soldiers just went away never returned. These devices answered questions that nothing else could.

“Today, death is more removed. We live longer and we don’t even want to look old.”

Yet “each generation rediscovers the mystifying oracle,” he says. Ouija lives on the big screen with the second installment of the movie franchise: “Ouija: Origin of Evil.”

“Whether you sit at the board and believe you’re communicating with your subconscious or parting the veil and talking to the other side, you are opening a portal,” Murch says. “What you’re opening yourself up to and communicating with as the planchette slides across the board spelling out messages has been up for debate for 126 years.”