Don’t Forget the Nuts and Bolts 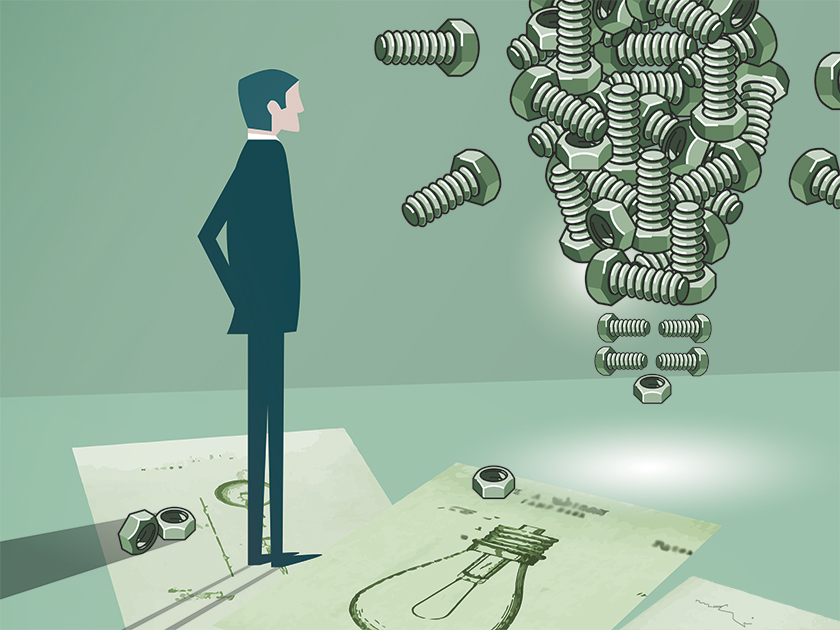 What is relevant to patentability is how the invention is different compared to the prior art on a structural, mechanical level.

From a conceptual standpoint, it would seem logical to assume that writing text to describe an invention ought to be easy for the inventor of that invention.

Unfortunately, it isn’t that simple. Although inventors are very good at inventing, they tend to be less good at many of the adjacent and necessary tasks along the road from invention to market success.

The inventor undoubtedly knows the invention better than anyone else, but it can be enormously difficult for him or her to describe it.

The inventor of a new and useful invention is always in the best position to describe it. The problem lies with the reality that most inventors don’t understand what needs to be described in order to satisfy U.S. patentability requirements.

And when inventors avoid professional assistance, they often wind up focusing their entire description of their inventions on how their new device or gadget will be used—at the expense of describing the parts and pieces that make up the invention. This is an enormous mistake, one from which there is often no recovery.

For example, most inventors can write volumes about why they came up with the invention, but why the invention was made isn’t particularly relevant to patentability.

What is relevant to patentability—and almost universally ignored by do-it-yourself inventors—is how the invention is different compared to the prior art on a structural, mechanical level.

That is why it is best to proceed as if a patent application requires instruction manual-level of disclosure. This “make and use” requirement is called the enablement requirement.

Without getting too much into the legal weeds, it is critically important to point out that the enablement requirement specifically requires the patent application to teach how to both make and use the invention.

Thus, when the majority of the focus is placed only on how to use the invention, the patent application filed is almost certainly going to be defective. Sadly, a defective patent application that does not satisfy the enablement requirement at the time it is filed does not provide any value.

Therefore, one should place appropriate focus on how to make the invention—which requires description of each of the pieces and parts of the invention, as well as detailed instructions for how everything is assembled.

Inventors should not despair. Disclosing and then describing the pieces and parts of the invention is not as impossible a task as it might initially seem.

High-quality patent drawings are ordinarily quite inexpensive (about $30 to $50 per figure). Whatever one of skill in the art would understand by viewing the drawings will be disclosed. Of course, you should also include descriptions of each figure in the application.

Why is this so important? Because for an invention directed to a tangible invention (referred to in patent law as either a machine, device or apparatus) to be distinguished from the prior art, it must be described in terms of structure rather than in terms of function.

This is true because an invention description that only focuses on how the machine or apparatus is intended to be used does not differentiate from the prior art if the prior art teaches all the structural limitations of the described tangible invention.

If you focus your description only on use, at best you can obtain a patent on a new method for using a known product. The problem with those types of claims, however, is that in the hands of an individual, new and nonobvious claims to a new method of a known product became difficult, if not impossible, to enforce.

The thought process goes like this: Whom will you sue for infringement of your new method patent? In almost all cases, the infringer will be the user—not the manufacturer, distributer or seller.

But if you define your invention from a structural standpoint instead of a use-only standpoint, the infringer would be the manufacturer, distributer and seller.

Being able to control the tangible invention and prevent it from reaching the marketplace is the point of a patent. That way you have a meaningful asset that can be licensed to those who want to manufacture, distribute and sell.

Of course, method patents are not useless, and in fact can be quite valuable in the right hands.

For example, if you were to invent a cheaper, faster, more efficient way to create a known product, you could sell that known product for less than what others could who are not using your method. These types of commercial methods can become quite valuable and must be distinguished from the typical method of use that an inventor describes.

The moral of the story: When describing an invention, you must  describe how the invention will be used. But to obtain the most valuable patent, you need to describe the structural uniqueness of your invention.