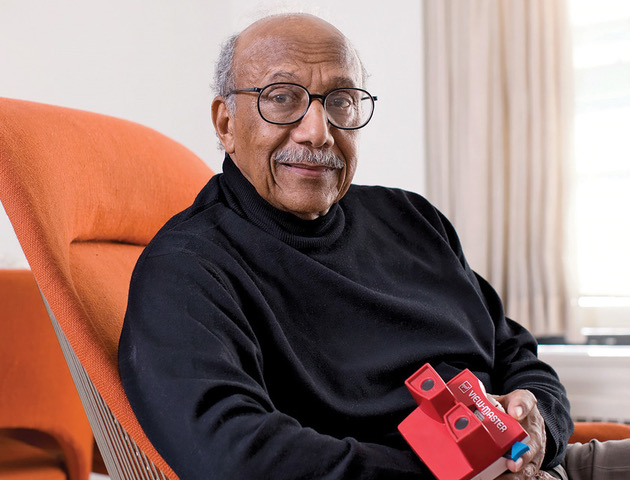 Theroot.com called Harrison “the most important person you never heard of … the most prolific product designer in American history.”

When a Major League Baseball controversy unfolded this past winter, you have to wonder what Charles Harrison would have thought about one of his signature innovations being the source of so much negative attention.

A Bing search on the words “Houston Astros trash can” during spring training yielded a staggering 2,420,000 results—the byproduct of a historic cheating scandal in which it was determined that the 2017-18 Astros relayed signs to their hitters by banging on trash cans. It didn’t take long for a heckling fan to bang on a trash can during one of the team’s spring workouts.

Harrison, who died in November 2018, obviously had a quietly different purpose in mind.

Known as “the Jackie Robinson of industrial design,” Sears’ longtime chief product designer and first African-American executive made a career of rethinking inventions. Theroot.com called him “the most important person you never heard of,” adding:

“He is unquestionably the most prolific product designer in American history and changed American life and culture so much, even he couldn’t name every single product for which he was responsible.”

Harrison reinvented and/or developed more than 700 products, with one standing out as his proudest achievement—and standing out weekly in the driveways of millions of American homes.

The hard rubber trash can, often with wheels, became a U.S. consumer staple after decades of clunky, metallic predecessors. Harrison’s 1963 innovation was quieter and more functional, featuring a design that enabled the cans to nest inside one another for easier storage and transport.

In his 2006 memoir, “A Life’s Design: The Life and Work of Industrial Designer Charles Harrison,” he wrote: “When that can hit the market, it did so with the biggest bang you never heard” (until the Houston Astros came along, anyway).

Harrison’s many loud impacts were the result of not just creativity but determination. He excelled at City College in San Francisco even though he was dyslexic and got his master’s degree in art education at Illinois Institute of Technology.

The rampant discriminatory policies still in force in the 1950s initially held him back. He tried to get a job at Sears, Roebuck & Co. but reportedly was denied because of his race. However, one of his undergraduate professors, Viennese architect and designer Henry P. Glass, helped him find freelance design work.

One of Harrison’s career turning points came in 1958 when he was working for Robert Podall Associates and was asked to redesign some popular toy binoculars. The View-Master, introduced by two inventors at the 1939 World’s Fair, allowed users to click through striking 3-D images.

Harrison led a team that streamlined the View-Master by making it plastic, lessening the bulk of its batteries and improving its functionality. They added a lever system for changing the images and an orange color that kids loved, making the toy a classic with robust sales for decades.

Sears hired Harrison in 1961, the start of a historically prolific 32-year career. He not only redesigned the electric sewing machine into its current version, he designed 8-12 different sewing machine models every year for 12 years.

He retired from Sears in 1993. In 2008, the Smithsonian’s Cooper-Hewitt National Design Museum gave Harrison a Lifetime Achievement Award “in recognition of an individual who has made a profound, long-term contribution to contemporary design practice.”

He wrote that “As an industrial designer especially, your audience is neither history nor fame.”