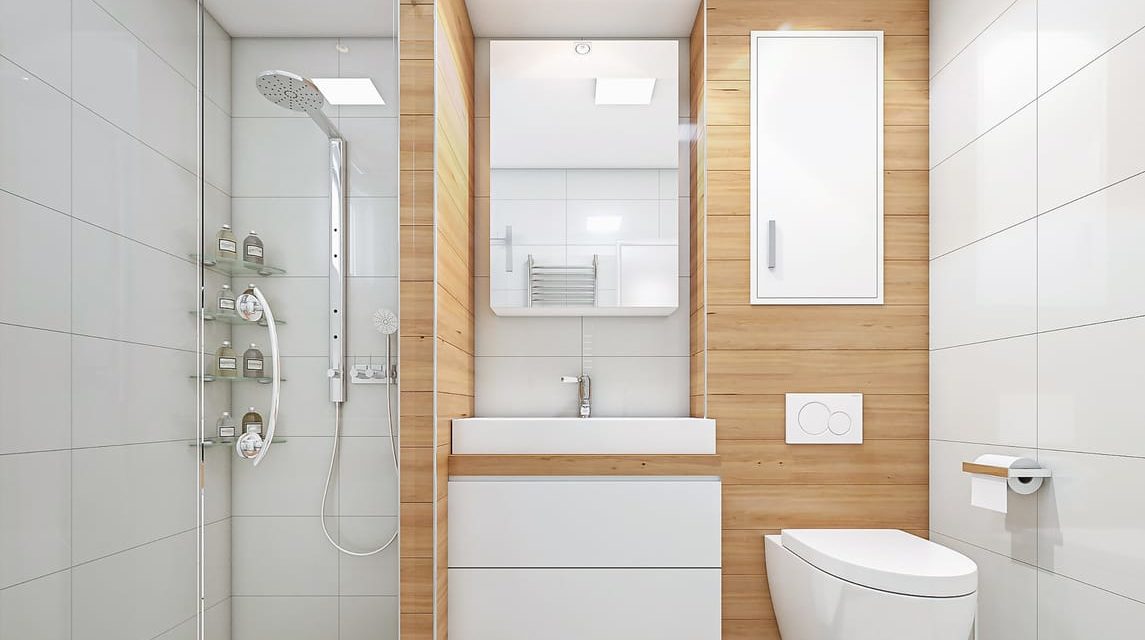 I just can’t get away from it! It seems most of the interviews I’ve done during the past few years have been for inventions in the personal care industry. That alone for me is proof that it’s still a booming industry for new products.

Our goal is to bring products to market that we have a personal attachment to, or a need for. It helps with product development when you are potentially the target market.

Recently, I came upon a story of three men—Shaun Kibbe, Neil Ward and Dustin Keiswetter—who formed Hatch Innovations and created the WhizzBang. That’s a catchy name for an item that prevents (nicely put) “splatter” around the toilet. The three hoped to have WhizzBang go live on Indiegogo this summer and have the product on shelves in time for Christmas.

Edith G. Tolchin (EGT): Tell us about yourselves, how you know each other, and how the invention came about.

Shaun Kibbe (SK): Hatch Innovations began with the prospect of a fun but exhausting weekend. Dustin Keiswetter and Neil Ward became acquainted while attending the same church and found they shared similar interests in CAD and 3D modeling. Neil mentioned to Dustin that he had seen a new 48-hour invention competition while attending a maker’s fair in Kansas City. The two decided to submit a team application but wanted to round out with one more member. Dustin called on me. We had become friends while attaining our mechanical engineering degrees at Kansas State Polytechnic. We later worked together at a local manufacturing company. Neil, an assistant professor in the department of art and design at Kansas Wesleyan University, could surely make anything that two gearheads come up with aesthetically pleasing as well as functional. An application was submitted and the team was selected.

EGT: Tell us about the “Make48 Invent-a-thon” held at the Kansas City Art Institute.

SK: Make48 is a ground-breaking concept in that it combines the excitement of an invention competition with an innovational documentary series. Teams are given 48 hours to plan, prototype and pitch an idea for prizes and coveted licensing potential. Camera crews are on hand to capture everything from the excitement of the unknown product category, idea conception, prototyping, disappointments, exhaustion, hilarity, and finally product pitches to the competition judges. The judges typically represent production companies or are well known in their areas of expertise in marketing, production or product sales.

We were invited to join the Make48 competition at the Kansas City Art Institute. The product category for our competition was a product for use within the four walls of a home. We started by going room to room and determining what issues that we encounter in each. We avoided the kitchen simply because we felt it would be the target area for most of the teams. We landed on the bathroom, specifically messy toilets when living with boys. How could we get the boys to actually aim?

EGT: How did Dustin, who’s the father of three boys under 5, help along the invention process?

SK: Dustin presented the idea to the team. When we were going room to room thinking of possible problems or issues, he mentioned his newly remodeled bathroom was deteriorating, specifically the caulking around the base of the toilet. He mentioned one time in particular when one of his little boys was using the bathroom while the door was open. As Dustin walked by in the hallway, the boy turned around to look at him, and according to Dustin, “NO, NO, NO, look what you’re doing! Ack!” We all had a good laugh, and that’s when we knew we had our project chosen for the competition.

EGT: Describe how the WhizzBang works and its components.

SK: The WhizzBang is an electronic component that is to be affixed under the lid of a household toilet. Once activated, it projects a target onto the water of the toilet or wherever the best angle is deemed to avoid splash back. When a boy (or man) is on target, he will get positive feedback by a rewarding sound effect that can vary, depending on choice/product model.

In order to achieve the feedback, we incorporated an infrared heat sensor that converges with the target projector. When the sensor detects a rise in temperature due to the urine stream, the feedback is activated. Originally we planned to use a laser to project a target image. We ran into potentially dangerous glare issues, and it has since been changed to focused LEDs.

EGT: Who thought of the name?

SK: We were tossing around names for the toilet target and having a pretty good time of it. Once it was mentioned that one of the possible feedback sounds could be a gun sound to make the boys feel like they’re really doing something, I quipped, “We’ll call it the ‘Wizz Bang.’” Neil said, “That’s it! It’s descriptive and catchy.” The Wizz Bang name stuck—only we had to change the spelling to “Whizz Bang” to avoid confusion with an existing product of no relation.

EGT: How did “Make 48” yield a licensing agreement?

SK: The top three teams received licensing consideration for a licensing agreement through Handy Camel. Handy Camel was given first right of refusal for licensing any of the products.

EGT: What is Hatch Innovations?

SK: After the Make48 competition got our collective creative juices flowing, we didn’t want to walk away from it. We decided to continue to meet and bring up ideas for the other guys to bat around. After several months of collaboration and many hours of work, we decided to make it official and create our own small LLC. We named it Hatch Innovations. Hatch is a mental analogy to us for bringing an idea or concept out. You never know what is in the egg—a swan or a stinker (LOL).

We asked ourselves, “If we can come up with a prototype of the WhizzBang in 48 hours, what can we do in a week, month or year?” But it’s difficult to recapture the magic of being part of an invent-a-thon. When you are there, you are immersed in that world. You have fast-approaching deadlines; you have competition; you have advice, input and physical assistance from experts. And most important, the real-world distractions are on hold until Monday.

Our goal is to bring products to market that we have a personal attachment to, or a need for. It helps with product development when you are potentially the target market. We have several wide-ranging products that we are currently hammering out in various stages of development. At this point, we are more interested in licensing our products versus manufacturing them. We’ve recognized that we enjoy the innovation and development processes. The actual production is a distant future thing.

It’s amazing to work with others who are on similar wavelengths. We’ve grown respect for each other’s strengths, talents and acknowledged weaknesses.

EGT: Did you encounter any stumbling blocks?

SK: We ran across several setbacks along the way. The first one was with the patent attorney. It turns out that there have been toilet target patents applied for. Some even have a lighted reticle like we wanted to incorporate. Instead of starting over, we pressed on to differentiate our targeting system with actual feedback. This set the WhizzBang apart enough to make it patentable.

Motion detection was the next hurdle. We originally specified an emitter and receiver to actually see that the target was being contacted with whizz. It’s not that it isn’t possible, but it soon became evident that our cost would be through the roof for the sensors and logic to make it happen. Heat detection can perform the same function, but it’s simpler.

We had an independent product developer source the components and shell for us. We found that we could not get the manufacturing and shipping costs down to allow the WhizzBang to be sold for under $20. Handy Camel, Make48’s licensing company, has since conceded that a higher price point can work for this product. The sale numbers are anticipated to be lower, but it allows for actual marketing for the WhizzBang.

EGT: How many prototypes have you had?

SK: The early prototype(s) were a “looks like, feels like” model with a tilt switch and a laser. I believe that we had at least three to four of these models. This helped us to discover that not all toilet seats have the same clearance between the seat and bowl, and we crushed one right before the Make48 presentation. Fortunately, it still worked and the glue was not detracting.

We then moved on to a low-functioning model that actually contained an Arduino programmable board, infrared sensor, laser, switches and a piezo (electric) speaker. The Arduino gave us the ability to simulate an integrated logic chip. With this model we proved out the concept of heat detection to feedback, which was huge. Obviously, it could not be produced with a programmable board with components sourced in low quantities for a price point that would satisfy anyone. We handed it off to Pivot International, which has since produced several working prototypes at an acceptable cost.

EGT: Are you manufacturing, and if so, where?

SK: We are currently in a pre-production phase for market testing. One of the major product releases was at the National Hardware Show in Las Vegas. Handy Camel, the licensing company, will contract with an American manufacturing company, possibly using both offshore and domestic manufacturing.

EGT: What are your plans for selling the product? Or will that be up to your licensing company?
SK: Initially a crowdfunding campaign, then working with retailers for larger contracts and higher manufacturing runs. We hope to have secured some contracts from retailers at the National Hardware Show.

SK: If you’re working with production and manufacturing companies, you will lose some control and influence over some of the design decisions. While not a bad thing, it does mean that there comes a point when you need to step away and accept that the development and production needs of the product will begin to dictate many details that you may not have anticipated.

One other thing we have learned is that it is important to find people to do the things that you don’t want to do or cannot do. Finding partners that allow you to focus on your strengths keeps the creation process exciting and invigorating while making sure that all of the necessary components of the business keep moving.

For instance, we know that our interest lies in ideation and prototype development. Getting the chance to have Handy Camel focus on marketing and product release of the WhizzBang has been a great opportunity to feel like we are still a part of the process, but without the stress of organizing that part of the product life cycle.

Thanks for your comment! Glad you enjoyed my interview!