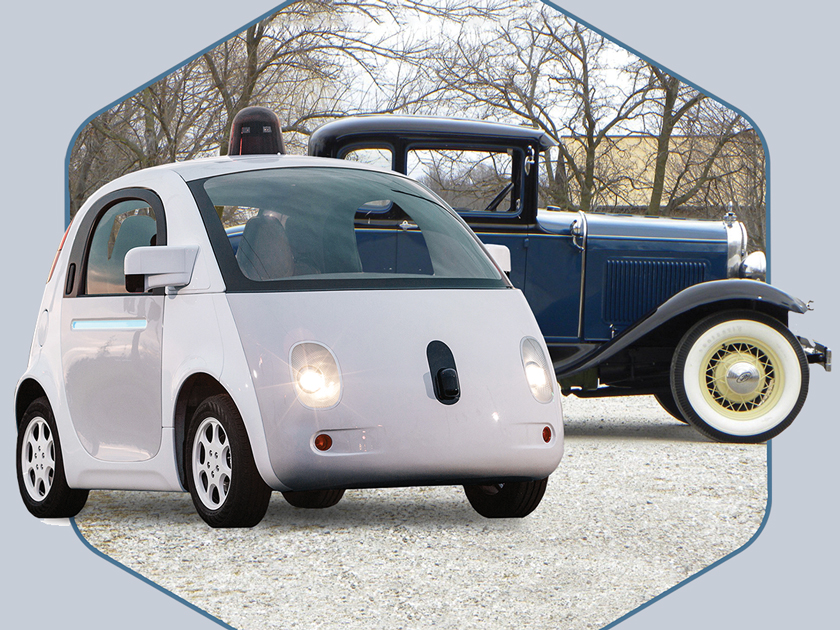 Newer car technology is king of the road, with even greater potential—and questions—ahead

It would be welcome to tell my car to scout out a place, go park itself, and then call it to have it pick me up when I’m ready.

Old curmudgeon: “The Model A Ford—now, there was a car! It was simple, dependable, and you could repair it yourself.”

Millennial: “Right. But you had to disassemble the engine every 30,000 miles or so and replace the piston rings. The good news was that you had an automatic warning device known as the rearview mirror. You looked in it, and when the car behind you was obscured in a cloud of blue-gray smoke, you knew it was time for a ‘ring job.’ When the rings were worn, the oil got past them and into the combustion chambers, where it burned.

“And if you ignored the smoke, you’d soon hear what was called a rod knock. The bottom bearing on the piston crank arm had worn out due to lack of oil, and it slapped the crank shaft twice with each cycle of the engine. Ignore the rod knock and you’d fracture the crank arm, tearing the engine apart.”

Old curmudgeon: “OK, the old cars had problems. But the newer cars are too damned complicated. I don’t even know how to change the spark plugs anymore.”

Millennial: “I hear you. But spark plugs used to be replaced every 25,000 miles or so. Some drivers cleaned them on a sand blaster and re-gapped them. But that was even more trouble than installing new plugs. Nowadays, plugs last for more than 100,000 miles. So, don’t complain. Have a mechanic replace them when you find your gas mileage drop off a bit, or your car hesitate intermittently when climbing a hill.”

Old curmudgeon: “Say, young fella, how come you know so much about old cars?”

Millennial: My grandfather taught me. He has restored a number of them from the late ’40s and ’50s. I’m helping him with one right now.”

Old curmudgeon: “Well, the new cars are great, but we always knew how to troubleshoot when a car wouldn’t start. You can’t do that these days. It was either carburation or spark. Mostly, it was spark. So, we’d replace the distributor points and the condenser. Simple. But to be fair, sometimes we had to rebuild the carburetor.”

Millennial: “I’ll give you that. It was simple enough. But how often have you had a problem starting your ten-year-old Ford? Unless your battery is seven or eight years old and balks at cranking in very cold weather, I’ll bet you’ve never had a problem starting. And you’ve never had to replace your distributor points because there aren’t any. Modern ignition timing is solid state, and I’ve never known anyone to have a problem with it. Same with carburetion; it’s controlled by the computer, which is how you’re able to average 25 to 30 miles to the gallon around town.”

Old curmudgeon: “Well, yeah, I gotta admit that the mileage is great. But look at what we’ve lost. Those old Chrysler Imperials and Buick Roadmasters rode as smooth as silk, because they had the steel to hold them to the road. Some of those cars weighed close to 5,000 pounds. My new Camry weighs around 3,300 pounds.”

Millennial: “You’ve got a point. We’ve improved the ride a lot with modern suspension and shock-absorber design, but it isn’t quite the same as those old ‘battleships.’ Another point I’ll make on your side is that of the poor design of present-day car seating. Many years ago, cars had coil springs in the seats, and you could drive for hours without pressure points that put your butt to sleep. The resistance to pressure was even all across the entire surface of the seat.

Today’s cars may look essentially like those of 60 or 70 years ago. (Who wouldn’t love to own a like-new ’56 Chevy Bel Air today?) But today’s cars are marvels of dependability and safety.

The main thing we’ve given up is weight—the absence of which is one of the main contributions to the excellent miles per gallon we get with all cars that have sensible engine displacement, such as 2.0 to 3.0 liters.

Most of us have grown up with seat belts and use them habitually. But those who don’t use them risk serious injury or death.

Safety has been recently increased with radar-like “eyes” that keep us from sideswiping due to drifting into the lane alongside us or keep us from colliding with a car in front of us. These may be rare events, and the benefit-versus-cost equation may tell us to hold off until the price comes down. But we can’t deny that the added safety might be priceless.

The next major step in safety is said to be the self-driving car. But its introduction may face challenges.

In late December last year, media outlets reported that people in Chandler, Arizona, attacked self-driving cars. Angry and fearful, people slashed tires, threw rocks, tried to run the cars off the road, and threatened drivers by waving pipes at them.

I don’t plan to be hostile to those cars or the persons driving them. But I’m sufficiently skeptical, at least for a few more years.

However, when I think of the difficulty of finding parking places in crowded towns and cities, it would be welcome to tell my car to scout out a place, go park itself, and then call it to have it pick me up when I’m ready.

A question of trust

The age of artificial intelligence, robots, and self-driving trucks and cars is not likely to be a fad that eventually goes the way of hood ornaments and curb scrapers. It’s not only here to stay, it’s bound to proliferate.

The most difficult maneuver a car can perform, I imagine, is parking itself in a tight, parallel parking spot. The engineers seem to have mastered that. So I don’t doubt that a driverless 75-foot semi can wait out the traffic, swing into the opposing lane, and turn into a narrow alley without running over a curb or scraping paint.

The big question: When will we trust them to drive without a human on board? Certainly there is no software with more potential for multiple human tragedy than the software that self flies our aircraft. And yet, the recent crashes of the Boeing 727 Max 8 planes demonstrate that the most seemingly qualified programs are not always failsafe. Will we have to learn from mistakes, or will self-driving be goof-proof from the start?

And where in this radical new era of highway traffic is there opportunity for inventors? Most likely it won’t be in the high-technology arena but in service to a new kind of assistant to the vehicle’s computer, a human being with time on his or her hands.

What will occupy the time of the “driver” who is no longer compelled to focus his or her eyes on the road, and continually be alert for the unexpected? That’s for our fertile and creative minds to dwell on and provide a response.