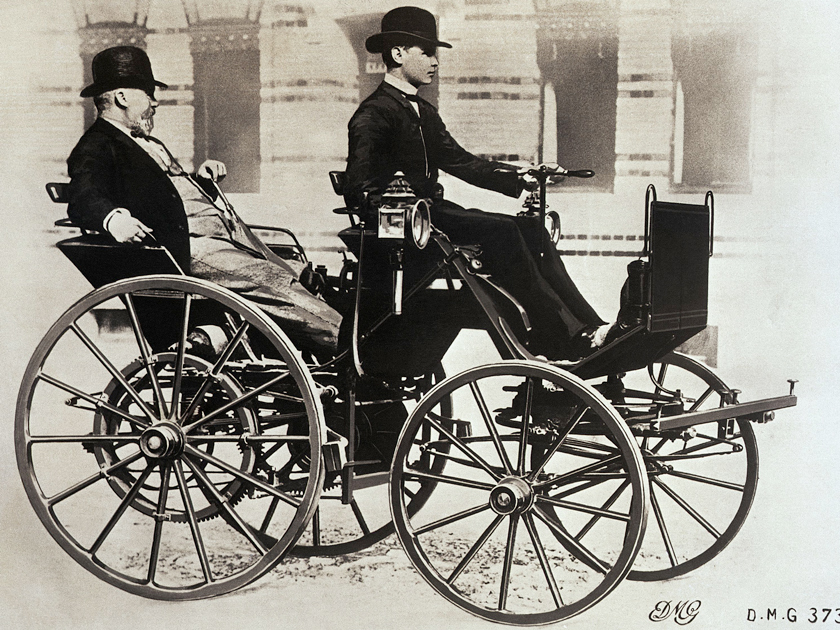 Most, if not all, of the most impactful auto-related inventions listed here are obvious selections. What isn’t as obvious is who invented the automobile itself.

That distinction generally comes down to either Karl Benz or Gottlieb Daimler.

Daimler was a pioneer of internal-combustion engines and automobile development. He invented the high-speed, liquid petroleum-fueled engine, which is also the foundation of today’s cars.

But the most important car-related inventions of all time transcend engine technology. They include milestone safety and convenience factors that have ensured the automobile remains as popular and essential as ever in our lives.

The steam engine is the flagship innovation in automobile engineering, as well as one of the most significant byproducts of the Industrial Revolution. The engine uses force produced by steam pressure to push a piston back and forth inside a cylinder.

At first, steam engines led to the development of locomotives and ship propulsion before being refined for use in cars in the late 1800s. The car engine evolved further when it was replaced by the less-expensive internal combustion engine.

Contrary to what some believe, Henry Ford did not invent the internal-combustion engine. In fact, thehenryford.org credits Nikolaus Otto for the early 1860s innovation, which burns a mixture of fuel and air. (Some sources say that Etienne Lenior produced the first reliable one in 1859.)

These engines—which originally used coal gas, not gasoline—were a major success because they did not need a boiler or licensed operators. Plus, they could be started quickly, with no waiting period to raise steam.

The main advantage of the internal-combustion engine was its superior weight-to-power ratio. This allowed the engine to be used to drive motor vehicles, aircraft, tractors, submarines and tanks. Motor vehicles replaced railways as the principal means of land transport in the 20th century.

Ford did not receive a patent for his internal-combustion engine until 1935. His most historic accomplishment was installing the first moving assembly line for the mass production of automobiles.

More precisely called self-shifting transmission, this prevents drivers from having to change gears manually as the vehicle is moving. Besides being a plus for people with disabilities, it facilitates driving with two hands more often.

The story of the automatic transmission tells of a lost opportunity for Alfred Horner Munro, a Canadian. He originally developed it in 1921, patented his design in 1923 and received UK and U.S. patents in 1924 and 1927, respectively.

Munro’s early design used compressed air rather than hydraulic fluid, as used by modern systems. But he was unable to find a commercial application for his invention.

In 1932, Brazilian engineers José Braz Araripe and Fernando Lely Lemos developed a hydraulic fluid version. They sold their design to General Motors in 1940, and driving was changed forever.

It could be argued that in terms of benefiting humankind, the catalytic converter is the most important automotive invention ever developed. It converts toxins and other pollutants into less hazardous forms, improving air quality.

Mounting concerns about the ecology in the early 1970s led to the Environmental Protection Agency drawing up stricter regulations on exhaust emissions in 1975. The catalytic converter concept came from French engineer Eugene Houdry, who was concerned about smog and air pollution in Los Angeles.

His catalytic muffler was patented in 1962. The first production converter, which refined Houdry’s design, was produced in 1973.

Maybe we should have saved this amazing nugget for our monthly Inventiveness page at the back of the magazine: Antilock braking dates as far back as 1908, when J.E. Francis developed the system for trains. The concept was introduced in the aerospace industry in the 1950s before catching on in cars in the 1970s and motorcycles in the 1990s.

(The first patented antilock braking system was developed in 1928 by German engineer Karl Wessel, but a working product never materialized.)

In 1971, Chrysler introduced “Four-Wheel Sure Brake,” the first computer-operated, four-wheel anti-skid braking system to be offered on an American car. It was standard equipment on the ’71 Imperial.

The first patent for this life-saving invention was a race to the finish line between American John Hetrick (the generally acknowledged inventor) and Germany’s Walter Linderer in 1951. Their systems used compressed air that was triggered using a spring, bumper contact or manually by the driver.

The technology was widely adopted in the 1960s, aided by the development of crash sensors. Several automakers included them in their 1970s models, but airbags didn’t become standard equipment until the 1990s.

Even today, the explosive force of an airbag deploying can cause friction and power burns, detached retinas, suffocation and even death, especially in children. However, the National Highway Traffic Safety Administration reports that frontal air bags saved 44,869 lives in the United States from 1987 to 2015.

It is not clear who invented the 2-point seat belt. Edward J. Claghorn was issued the first U.S. patent for something like a seat belt in 1885, although in the patent application he describes it as having nothing to do with automobiles.

The belts appeared sporadically in cars afterward; some sources suggest they may have been used in racing activities and airplanes before the 1930s. What is clear is that these lap belts were incomplete from a safety standpoint because the upper torso would often fly forward, unprotected, in a crash.

Volvo engineer Nils Bohlin took the seat belt into safer territory by developing the 3-point belt, which is designed to dissipate deceleration energy during a collision over the chest pelvis and shoulders of the passenger. Bohlin’s belt was introduced by Volvo in 1959 and first appeared in the Volvo PV 544. Volvo later made the patent open in the interest of safety for the general public.

The NHTSA says seat belts save about 11,000 lives annually.

Efforts to display an intention to turn have taken many interesting turns. According to secondchancegarage.com, Percy Douglas-Hamilton applied for a patent in 1907 (received in 1909) for a device “indicating the intended movements of vehicles.” The lights were shaped like hands so other drivers, accustomed to reading hand signals, would understand their meaning.

In 1914, silent-film star Florence Lawrence designed a mechanical signaling arm but failed to patent it. (She also designed the first mechanical brake signal.) As the driver pushed a button, a sign on the rear bumper came up telling others which way the driver would turn.

According to the December 1985 Popular Mechanics, the Protex Safety Signal Co. introduced flashing turn signals in 1920. The first modern turn signal came from Edgar A. Walz Jr., who in 1925 got a patent for one and tried to market it to major car manufacturers. They weren’t interested, and the patent expired 14 years later.

The first flashing electric turn signal was patented in 1938 and offered on the Buick.

GPS has revolutionized the way almost all of us navigate. It not only takes the guesswork out of finding your driving destination, it’s also helping to make maps a lot more rare and valuable!

Global Positioning System was originally developed by the U.S. government for use by its armed forces. It launched in 1973.

The first system used 24 satellites and became fully operational in 1995. Roger L. Easton of the Naval Research Laboratory, Ivan A. Getting of the Aerospace Corp. and Bradford Parkinson of the Applied Physics Laboratory are most often credited with inventing GPS.

Civilians have been allowed to use GPS since the 1980s, leading to its more universal uses. The systems are now integrated into many modern technologies.

We saved perhaps the most interesting capsule for last, one that is at the root of a future and possibly permanent trend. Cruise control was developed by inventor and Automotive Hall of Famer Ralph Teetor—who never drove because he was completely blind.

Teetor conceived of cruise control because he believed that uneven speeds were a big factor in accidents. While riding with his lawyer in the 1940s, he noticed the attorney had a tendency to slow down while talking and speed up while listening as he drove.

The system is based on a servomechanism to help maintain a car’s speed by taking control of the throttle from the driver. It was first included on U.S. models in the 1958 Chrysler Imperial, New Yorker and Windsor. By 1960, cruise control was a standard feature on all Cadillacs. It further gained popularity as a fuel-saving feature during the oil crisis of the 1970s.

Radar was added to cruise control in the early 2000s—another milestone in a system that has paved the way for driverless cars.