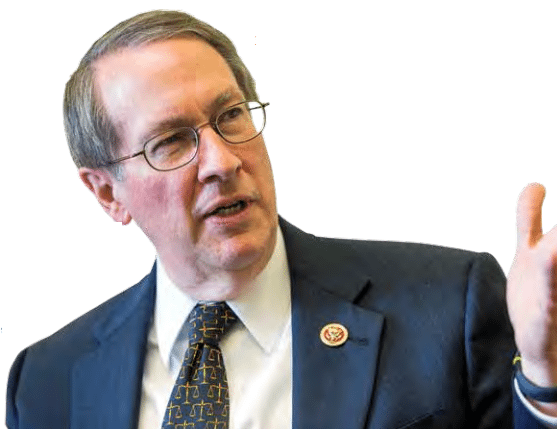 House Judiciary Chair’s agenda may not be inventor-friendly

Congressman Bob Goodlatte (R-Va.), who holds the chairmanship of the House Judiciary Committee and will wield great power over intellectual propertyrelated legislative reforms during the next two years, unveiled his agenda for the 115th Congress on February 1. Not surprisingly, a portion of his agenda includes additional patent litigation reform to address what he characterizes as “truly frivolous lawsuits,” as well as reforms to keep America’s patent laws up to date and copyright reforms to help ensure “America’s global leadership in creativity and innovation continues.”

Regarding intellectual property, Goodlatte promised additional patent litigation reform aimed at eradicating frivolous lawsuits. This will make for an excellent sound byte on the evening news, but the problem is that technology users have increasingly engaged in systematic and near collusive schemes to efficiently infringe patents. They simply ignore patent rights of innovators, do what they want, and rely on changes to substantive patent law and procedure that enable them to beat back any enforcement attempts by patent owners.

For those limited circumstances in which they are unable to play the war of attrition to defeat patent owners, they resort to the claim that any lawsuit they face is frivolous. In fact, last year Congressman Darrell Issa (R-Calif.) interchangeably used the terms “patent owners” and “patent trolls,” as if it is black-letter doctrine that all patent owners are patent trolls and all patent infringement lawsuits are frivolous.

Supported Controversial Act
Though Goodlatte will receive high praise in some circles for his efforts to end frivolous lawsuits, during the 114th Congress he not only supported but introduced the Innovation Act—which would have made significant modifications to U.S. patent laws that were seen as unfavorable by many innovators and independent inventors. My personal view on the Innovation Act is that it would have been a disaster. Of course, the Innovation Act was fought back in both the House and Senate, and it seems that it will need to be fought back again during the 115th Congress.

Even with Goodlatte’s pledge to move forward on patent litigation reform, the facts are likely against him and his allies in Silicon Valley. The popular press— urged on by Silicon Valley elite companies that make up the socalled infringer lobby—continues to write that frivolous patent litigation is a problem, but statistics paint a very different picture.

Patent litigation is sharply declining in America, with the number of patent cases dropping 22 percent last year. The continuing decline of patent litigation is one of the reasons the Innovation Act stalled during the 114th Congress. With patent infringement litigation dropping even further since the Innovation Act last failed, the act seems unlikely to regain the widespread support (325-91) that the bill enjoyed in the House in December 2013. The bill still failed in the Senate. But you can certainly expect Goodlatte and his allies to keep trying.

With respect to copyright reforms, although Goodlatte’s statements are non-specific, from what I hear there will be a push to make a number of changes to copyright law and procedure. So when he says there will be “numerous policy proposals to reform aspects of our copyright laws,” he should be taken seriously.

Some copyright issues will likely not be particularly partisan or contentious. There will be an attempt to remove the U.S. Copyright Office from the Library of Congress. Members of Congress seem to either be in favor of such an effort or largely ambivalent. This effort could also be coupled with an attempt to remove the Patent and Trademark Office from the Department of Commerce, which would then create a separate intellectual property agency— perhaps akin to the Federal Communications Commission. Although removing the copyright office from the Library of Congress likely won’t be contentious, if attempts are made to remove the patent office from Commerce that would slow things down considerably. Whether it would be a poison pill remains to be seen.

Push for Balance Coming?
How far Goodlatte will go with respect to copyright reforms remains unknown, but U.S. copyright laws are in serious need of updating. Attempts to update copyright laws to address rampant copyright infringement in the digital world generally, and on the internet specifically, came to a sudden halt when activists protested and threatened to hijack the internet.

In 2011 and early 2012, it seemed virtually certain that the House of Representatives would pass the Stop Online Piracy Act and the Senate would pass the PROTECT IP Act, which would then lead to some sort of compromise between the two bills. In the wake of protests and threats, the White House announced it would not support either bill and the wheels fell off attempts to provide copyright owners with better tools to fight rampant copyright infringement.

I don’t know that anyone expects something like SOPA or PIPA to resurface, but it seems likely that there will be a push to balance the playing field by tilting the law toward copyright owners and away from infringers who seem to be able to infringe with impunity.

Goodlatte’s Agenda Statement
“To make America more competitive again we must also make our legal system more efficient and fair. America’s legal system is considered the costliest in the world. In fact, one study found that liability costs in the United States are more than 2.5 times that of Eurozone countries.

“While we must protect the ability of Americans to seek redress through the courts when they are truly damaged or injured, there are measures we can take to reduce the wasteful burden that truly frivolous lawsuits impose on American competitiveness. Like excessive regulation, frivolous lawsuits are a drain on businesses, entrepreneurs, innovators, and hardworking Americans. We can and must do better.

“Over the next Congress, the House Judiciary Committee plans to reform the litigation system by seeking to reduce frivolous lawsuits, making it harder for trial lawyers to game the system, and improving protections for consumers and small businesses.

“The House Judiciary Committee will also build upon its review of our nation’s copyright laws to ensure that America’s global leadership in creativity and innovation continues in the 21st century and beyond.

“At the end of 2016, we issued our first bipartisan proposal to ensure the Copyright Office keeps pace in the digital age. Among the reforms contained in our first proposal are granting the Copyright Office autonomy and requiring it to maintain an up-to-date digital, searchable database of all copyrighted works. This proposal is the first of what we intend to be numerous policy proposals to reform aspects of our copyright laws.