Know Your Odds, and Your Baggage 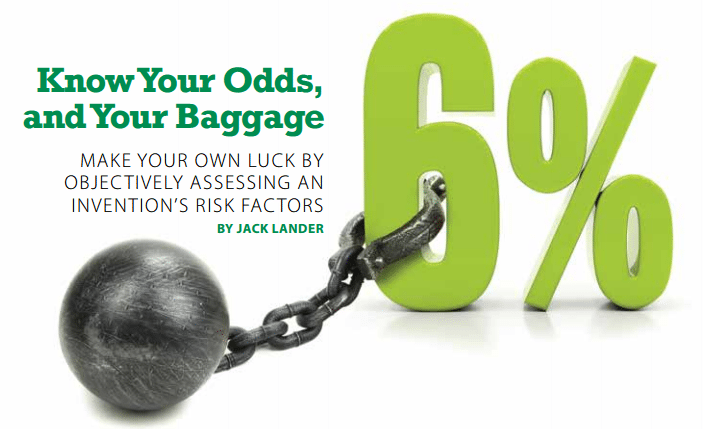 Make your own luck by objectively assessing invention risk factors.

I recall a very successful TV pitchman saying that one of his secrets for success was practicing his sincerity. I hope he was joking, because his statement is self-contradictory. You’re either inherently and spontaneously sincere, or you’re not sincere at all.

That kind of contradiction applies to luck as well. If you make your own luck, it is no longer luck. It’s the result of handling the things we can shape and control, and respecting the odds that apply
to those things that we can’t control. The person who consistently wins at poker isn’t merely lucky, even though the cards he or she is dealt largely determine the outcome of any single deal. It’s
his skill in controlling those aspects of the game that don’t depend on the cards he is dealt that determine his long-range success.

One reason that success eludes us is that we inventors tend to dream up solutions to annoyances, problems or needs that we stumble upon. That’s certainly one valid approach to inventing.
But the exciting and self-satisfying “stumbled-upon” solutions that pop into our heads seduce us away from what has the much greater influence on our success: investigating and evaluating
the invention’s baggage in order to decide whether to further pursue our solution.

Now, if the success rate for the stumbling approach were, let’s say, 50-50 or even 40-60, I’d say, “Keep on stumbling.” But the success rate is shockingly low. In his well-respected book,  “Entrepreneurship: Theory and Practice,” Donald Kuratko tells us that the probability of commercial success for inventions developed by independent inventors is about 6 percent. The majority of other writers estimate the rate to be even lower. But most of us would respond, “OK, but I know that there’s a big market out there just waiting for my invention.”

Rely on what is true

So, the first step for “making our own luck” is to admit that the odds quoted by experts are probably more accurate than our own estimates. Robert Ringer, an author of several down-to-earth
books on success, says, “Rather than loving truth, people try to make true that which they love.” It’s not easy to admit that our inventions may not be exceptional, and that in the end the chances
for their success will most likely fit the 6 percent statistics. A realistic perspective is essential to success because, as those odds suggest, it usually takes several tries before we hit the jackpot, and we can’t afford to be devastated by our failures. Winston Churchill said that the secret to his success was going from one failure to another without losing his enthusiasm.

Armed with a healthy respect for the odds, how do we beat them? How do we significantly improve our chances of success? We start by separating the two basic components of every invention
quest: the baggage it comes with, and the remainder, which we can control.

The baggage is what it is. We don’t determine it; we work with it, and around it.

Suppose that you invented a fluid that removes the sticky adhesive that remains on so many products after we remove their label (although such a product already exists). And you say to yourself
that all you need are the fluid, bottles and labels, and you’re in business. You figure that department stores will welcome such a product because a vast amount of what they sell causes the problem
and the annoyance and the need.

But how did people solve the label residue problem before? One household hint was to apply a bit of cooking oil with a paper towel, and rub like heck. But no commercial product existed. Good news so far.

Then, you estimate the number of times your family has removed labels in the past year—at least five times. And your Google search tells you that there are about 116 million U.S. households. That’s got to be a market of nearly 600 million. Even allowing for excessive optimism and big errors, there’s still a huge market.

Next, you need to know if it is already patented, and if not, your chances of getting a patent. This means having a patent agent or patent attorney conduct a patent search and provide a patentability opinion. Chances are that because your fluid is formulated from solvents, and the use of a solvent is obvious, the invention can’t be patented. But let’s say that you discovered
an unusual additive to water that somehow removes the sticky residue. Your patent attorney tells you that she thinks she can get you a strong patent.

You proceed to develop and prototype your invention. And you’re wondering whether to quit your day job and devote full time to this sensational opportunity.

Hold on. If no commercial solution presently exists, then no favorable market inertia exists for your invention. This means that you or your licensee will have to create the market in addition to
proving and producing the invention. Many inventions fall neatly into the product line of the licensee, and the licensee can wait out the slow climb of impulse sales until the product becomes more
generally known. The licensee can also advertise to stimulate early demand, but that’s a luxury that most small startups can’t afford.

Similar challenges apply if you intend to produce and market on your own. If you will have to depend on impulse sales because the market has not been established by an existing solution, your
sales may take years to reach a satisfying level. Let’s say you decide to market through a large chain like Kmart. You meet the buyer, he/she tells you that there is no demand for such a product, and his company is not in the business of gambling on products that don’t have a sales history. You scratch your head and ask yourself how the market for any product ever gets its start.

The point is that without present sales of an existing solution, there is no compelling proof that your invention will attract buyers. Before the existence of Goo Gone®, most of us had little more
than our fingernails and patience in order to deal with residual label adhesive. There was nothing in the product stream devoted to solving easy removal of the adhesive. And without an existing
competitive product flow to carry you along, you may have to abandon your quest.

Then you remember an Inventors Digest article on selling to catalogs, and how catalogs thrive on novel products that are not sold in stores. Your quest is saved!

Of course, this is just an example of creating your own luck—of greatly improving your odds—by properly assessing the market and your prospect for patent protection. Hopefully, you see the
wisdom of taking such actions before you devote a lot of effort to the fun part: developing your invention.

In the end, it’s still a risky business. Dean Kamen, who invented the Segway human transporter and the stair-climbing wheelchair, says: “I’m a risk taker. I get up in the morning knowing that I’m
either going to have a spectacular win or loss that is going to be exciting. I prefer the former, but either is more appealing than the warm death of mediocrity.”

Go forth and invent. Stumble onto your opportunities, if that’s your style. But don’t lose sight of the typical odds of success and the baggage that you must deal with upfront.