Lessons and Rewards, Multiplied Together 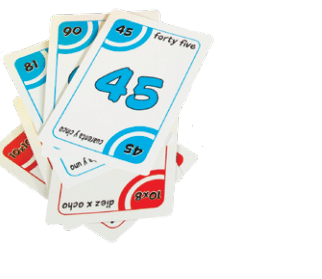 Inventions resulting from family collaborations are an invaluable learning experience. They can also be a financial success if families follow all of the proper steps and the market is right. Velvet Alvarez of Bethlehem, Pennsylvania—a junior at Moravian College—and her mother, Isabel, are determined to make Math Game 2×3™ a hit.

Edith G. Tolchin: How did the game come about?

Velvet Alvarez: My mom always had issues learning her multiplication tables and always thought. “There’s got to be a better way to learn them that’s easier and quicker.” She also wanted to help my brothers and myself with our tables so that we didn’t struggle and to help us learn them by memory. We would play the game every night, and by the end of the month we both knew them all. Math Game 2×3 was just an idea at first and then my mom thought of helping others with the game, so we decided to patent it. We currently have two patents. The patents cover all four methods of play, including multiplication, division, subtraction and division. We ran a crowdfunding campaign to help us make the addition board game (it met its $8,000 goal) and help younger children learn basic math in a fun way.

EGT: How is the game played?

VA: Math Game 2×3 uses four aspects: time, competition, involvement and luck. Three to 11 players can play in one game. There is one judge and then two to 10 players. The judge holds the question cards, and the players are dealt answer cards. There are two timers (5 and 10 seconds each), but only one is used during the game—depending on the skill level. When playing the game, the judge will present a question card. If any player has the answer within their deck, they have to put down the correct answer before time runs out. It’s often related to the game UNO, because the goal of the game is to get rid of all of your cards.

EGT: What is the age range for this game?

VA: The age range for this game is best for children 7-16. They begin learning multiplication tables when they are in fourth grade and are expected to know them after fifth grade, but it is best to practice them all throughout middle school since it helps keep them fresh and helps with memorization.

EGT: Is this a bilingual game?

VA: Yes, the game is in both English and Spanish and is great to have in ESL classes or in beginner Spanish classes to help students learn their numbers in the opposite language while they play.

EGT: Tell us about getting this game patented.

VA: Once my mom thought of the idea, my dad made the suggestion to patent it. We never really thought about it until then. My mom and I began to do research and tried to find a patent lawyer who was in the area so that we could present our idea. We began to do patent searches to see if our idea already existed, and there was nothing like it so we proceeded with the process. After fixing and accepting claims and a few years of waiting, we were notified that we had the patent. Later in the process, we thought it would be a good idea to make an app of the game or have an online version available. So to protect our method of play and designs, we followed through with another patent.

EGT: Did you manufacture in the USA, or overseas?

VA: We did research for several months on a variety of manufacturers in the USA and overseas. At this point I was a junior in high school and was preparing financially to pay for my college education, so pricing of the board games was important. All of the manufacturers here in the USA were unable to make a 5-10-second sand watch for a decent price. In China, we found a company that was able to make the game exactly how we needed it and gave us several options to pick from. The price was also within our budget. We made sure to have all of our games tested and approved, health-wise, for children. For the shipment to the United States, an uncle suggested their company’s overseas shipping provider and we proceeded with them. They were of great help and taught me a lot within that market, since it was my first time ever doing this. Everything arrived as mentioned, and we received them at our front door. This was a very exciting moment for our family!

EGT: Who designed your logo and packaging?

VA: My aunt in Mexico did the final design that is present on our board games. My uncle from Texas created the very first design that was a lot more intricate.

EGT: Do you have plans for other products?

VA: Yes, we hope to finally produce all four games— which include addition, subtraction and division, along with the multiplication game that is already out. With these, we can offer a variety of packages to schools and reach children of all ages.

EGT: Did you face any obstacles in developing this game?

VA: One of the main obstacles through our process was the language barrier. My parents understand but have difficulty speaking English, so I am the translator for everything. This made it hard to do business with lawyers and manufacturers. … Being able to understand all of the big and difficult terminology that lawyers and manufacturers use in their contracts and patent claims took longer for us because we had to read everything while we translated every word we didn’t understand, using the dictionary. Even being fluent in English, I couldn’t understand all of those documents because of the terms and language they used. Marketing is another one of our difficulties because we now have to sell the game and there is a lot of technique to doing that.

EGT: Any words of wisdom for novice inventors?

VA: They should not be afraid. It’s a difficult industry to jump into, but there are so many small-business development partners out there that are willing to help and guide you in the right direction. Always ask questions! Even if it seems simple and you might know the answer to your own question it is always best to ask, because so many new things will emerge from that question and you will learn from it.

EGT: Velvet, any plans for after college?

VA: Right now I am looking into research opportunities to expand my knowledge in microbiology and medicinal biology, as well as looking for jobs within my field. I plan to begin applying to graduate schools to pursue a graduate degree or my PhD if possible.