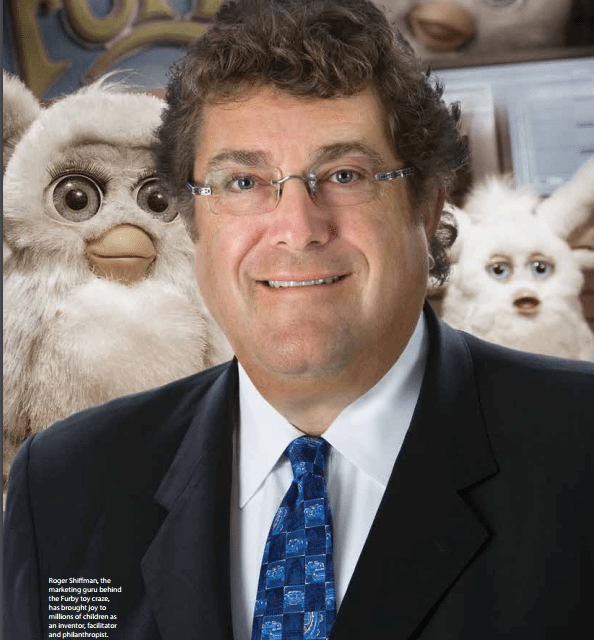 Roger Shiffman is a lot of things— the “billion-dollar hit machine” who was the marketing force behind the wildly successful Furby toy craze; a prolific inventor; an expert marketer and facilitator in producing popular kids’ products.

But he also wants you to know that he takes pride in successful collaborations, as was the case with Furby and FurReal Friends, and that he’s good at picking winners. That’s why he was a natural choice to partner with Edison Nation in their current search to find the next great toy invention.

Shiffman co-founded Tiger Electronics in 1998 and founded Zizzle in 2005. The latter received licenses to produce toys for Disney’s Pirates of the Caribbean franchise “High School Musical,” as well as Nickelodeon’s SpongeBob SquarePants and Dora the Explorer cartoons. As long-term board member and past chairman at the Starlight Children’s Foundation, he has worked to bring happiness to millions of sick children worldwide.

Shiffman talked with Inventors Digest editor-in-chief Reid Creager about the mind-set of a toy connoisseur, his philosophies about toys, and what he’s been up to lately.

Reid Creager: What were some of your favorite toys as a kid? Why did they appeal to you?

Roger Shiffman: I loved building with an original erector set, working with my hands, creating, building and more. I also enjoyed a chemistry kit and a microscope to explore the tiny world. This was the era where we played with toy guns of all kinds. My all-time favorite was a rifle and target set with a moving target that had a photo sensor and the rifle “shot” a light. It made noise if you had a “hit.”

RC: As a grown man, how hard is it to try to think like a child? Or— no offense—is this something that comes naturally?

Roger Shiffman: No offense taken. I think my childlike wonder and thinking is one of my best features in my success. I can relate. I’ve been quoted saying, “You’re only young once, but you can be immature forever.” I don’t find it difficult; in fact, I don’t even have to think about how to think from a kid’s perspective. When it comes to toys, I just have a great gut feeling.

RC: Have you had kids test a lot of your toys? What is interesting about them as critics?

Roger Shiffman: Yes, and the kids are great because they have no agenda. They are honest, and you can see almost instantly what they think about a toy, if they understand it, how to use it, if it keeps their attention, etc. I think we will be seeing this on the new TV show, “The Toy Box,” with new toys being judged on-air by kids.

RC: With all of the great toys you’ve had a role in inventing, what did they all have in common?

Roger Shiffman: I loved them all, almost like they were my offspring! Every one of them I believed in and expected them to succeed and be loved by all. Unfortunately, that didn’t always happen!

RC: When that doesn’t happen, is it sometimes a matter of timing? Luck?

Roger Shiffman: This is a long conversation, but I will say that some toys we did were way ahead of their time and didn’t work as I expected—though in later iterations from others, they did work. It was frustrating to have that happen.

I really don’t feel like any of our great successes were a surprise to me. I guess I always felt that each one was a superstar and that it would be fantastic, and luckily, many were. I haven’t been able to come up with that one real surprise toy—you know, the one that goes through the roof when you didn’t expect it. It would be easier to find those that disappointed, of which there were many, that didn’t reach the levels we had hoped.

RC: What inspired this next great toy search with Edison Nation?

Roger Shiffman: I have always loved seeing new ideas and trying to determine if they were potential successes for our business. I personally reviewed every submission that our people found and presented, looking for the right opportunities.

Now that I don’t have a company manufacturing toys, this is a great opportunity to once again review product submissions and get the juices flowing again about new product. And Edison Nation is an amazing resource to potentially partner in the development and licensing of the products.

RC: Why did you identify 2 to 6 years old as the sweet spot?

Roger Shiffman: That is my personal preference, to find products that appeal to this young group to help shape them with fun, creative toys. It’s also a group that doesn’t have to involve electronics and apps, though it could.

RC: Besides the obvious emphasis on technology, how have kids’ toys changed through the years?

Roger Shiffman: In addition to technology, there has been great emphasis on licensing. And as kids have gotten more sophisticated, it has taken work to make toys keep pace with them.

RC: Was it easier for you to promote and market toys pre-internet, or is it easier now? Why?

Roger Shiffman: Pre-internet was a simpler time. There weren’t so many choices—TV advertising, which is expensive, print advertising and basic PR. Now there are so many ways to promote and support products via the internet, but it’s also so crowded and fragmented. Breaking through the crowd is essential, but creative use of the internet including social media can make it much easier and less expensive to bring awareness to your product.

Reid C: What are your other current projects?

Roger Shiffman: I’m not involved with a company, per se. I’ve worked with a lot of younger start-ups and have been advising them. I’ve been looking at different companies, looking to do some roll-ups and put some things together. It’s strictly been a situation where people have been looking to me for help or investments.

I’ve been trying to purposely be much less visible. For so long, I was so out there. The persona of the company was always me; I was in Time, the New York Times, you name it. It got to the point where it was so much that I just wanted a respite from that.

I still volunteer at Wharton; I do their annual business plan competition that just concluded. I also work with the University of Illinois business school, helping them. My wife always says I’m the busiest retired guy she knows. Well, I’m not retired. I just don’t have a company I’m working with right now.

So whats the best way to go about an invention if you don’t have any money?

Your question, in connection with our “Toys and Games” issue, is subject to many factors. Assuming this is your invention category, how far along is your idea/invention/innovation? Have you researched prior art and are satisfied your invention is original? Do you have a prototype? Will you sell it yourself, or will you seek a licensee? If you are at a finished stage and seeking a patent, see Gene Quinn’s excellent how-to, “Patenting on a Budget,” in our February 2020 issue.—Reid Creager, editor

We respect your privacy and will never share your information.
wpDiscuz
2
0
Would love your thoughts, please comment.x
()
x
| Reply