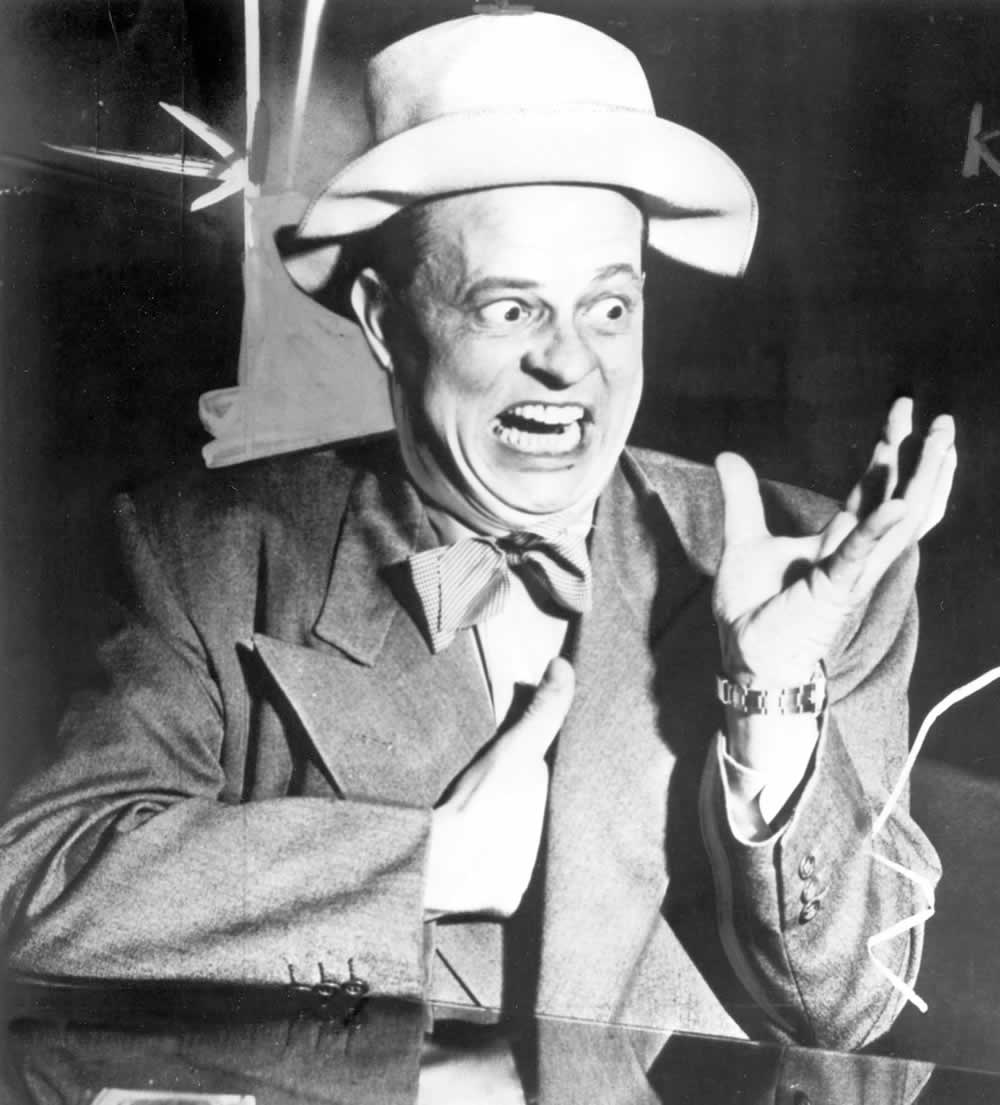 Tee Vee Muntz holds no resentment toward her father for the birth name he gave her. “There are a lot of people who, when they hear my name, they go, ‘Oh, my God! I’ve heard about that before but I didn’t believe it,’” she says.

Just part of the legacy of Earl William (Madman) Muntz, an innovator, master marketer and inventor who led a life that stretches the bounds of believability.

Many a baby boomer was affected at least indirectly by Muntz, whose three fortunes came in cars, televisions and car stereo products during a mercurial career that spanned six decades before his death in 1987. His persona as a marketer and salesman was arguably bombastic or brilliant: His signature slogan was “I wanna give ’em away, but Mrs. Muntz won’t let me. She’s crazy!”

It’s unclear which Mrs. Muntz he was referring to, given the fact that he was married seven times. An unreleased movie about Muntz’s life, “Madman Muntz: American Maverick,” featured the teaser “Seven wives … Three fortunes … One of a kind!”

Earl Muntz built a radio at age 8, then another for his parents’ car when he was 14. A year later, after the stock market crash of 1929, he dropped out of high school to help out in the family hardware store in Elgin, Illinois.

His first big break revealed the instincts of a savvy businessman. He bought 13 new right-handed drive vehicles built for customers in Asia that could not be delivered because of World War II, including a custom-made Lincoln built for Chinese President Chiang Kai-shek. Publicity generated by the unusual cars helped sell all of them—still in their original shipping crates—within two weeks. Muntz soon opened a second lot in Los Angeles, his lot in life coming into focus.

Madman Muntz became a fixture in car sales. According to thetruthaboutcars.com, in 1947 he made $76 million in sales and for a while was the largest-volume used car dealer in the world.

As his business grew, so did his reputation as a zany pitchman. With radio in its heyday as a major advertising vehicle and television in its infancy, Muntz amazed and amused with commercials that gained public notoriety and were talked about by celebrities. He dressed in wild costumes and performed crazy stunts. His print, billboard and TV persona was a cartoon character in red long johns and a tri-cornered hat. He would tout a “daily special” that had to sell on that day or he would smash it, on camera, with a sledgehammer.

Even the lack of visuals on radio were no deterrent to his creativity or persistence. At one point his ads ran up to 170 times a day, including one in which he screamed, “Stop staring at your radio!” One survey said that his car lots had become the seventh-most popular attraction in Southern California.

Tee Vee Muntz, now an administrative assistant in faculty support at the Oregon School of Law who goes by the name of Tee, realizes there are so many crazy stories about her father that some people may doubt their veracity. “He was such a big personality that sometimes it’s hard to believe,” she says. “But the majority of what’s out there is true.”

The Madman took advantage of another unique opportunity in 1951. Race car designer Frank Kurtis failed in his bid to market a new two-seat sports car and sold the manufacturing license to Muntz, who retooled the line and called it the Muntz Jet. His modified, blinged-out version made the cover of Popular Science and caught the eye of the rich and famous after he turned the car into a four-seater by extending the body; innovated bright and wild paint schemes and added interior options such as alligator and Spanish leatherette (with a full cocktail bar on the armrests), and made engine changes that brought the Jet to a top speed of 125 mph.

Muntz had the foresight to realize that if any 20th-century consumer commodity could possibly rival the car in popularity, it was television. Many years earlier, in 1946, he began plans to sell TV receivers. Just as he had shown mechanical proficiency with radios as a child, he would take apart various models to maximize the number of functional components while discarding the others.

By many accounts, Muntz would occasionally approach an engineer working on a TV and question the number of circuits being used. Then he would reach into his shirt pocket for a pair of nippers that he always carried and snip off a particular capacitor. If the TV picture and sound still worked, he would snip another one. This minimalistic practice, called Muntzing, is still referred to today.

“The premise was to take as many moving parts out of these things to get the price down and make a profit on it,” says Muntz’s son Jim Muntz of Sebastian, Florida, who worked with his father on various projects and in many capacities. “Those TVs were over-engineered in those days.”

Muntzing helped develop a chassis that produced a satisfactory monochrome picture with 17 tubes. The sets were reliable because fewer tubes meant less heat generated. Meanwhile, the Muntz media blitz continued as a way to leverage America’s obsession with this revolutionary medium. In one direct mail campaign, he collected thousands of TV knobs and mailed them to potential customers with a note: “Call us and we’ll show up with the rest of the set!”

Muntz TV Inc. grossed $49.9 million in 1952—around the time that the Muntz Jet was peaking as a splashy albeit unprofitable attraction—but could not sustain that success. Partially due to the emergence of color TV, it went bankrupt and closed in 1959.

By this time, Muntz was such a recognizable figure in California that he had become a media star. His visibility resulted in many Hollywood contacts and friendships—the latter including Gene Autry, Phyllis Diller, Bert Lahr and Dick Clark. His high-voltage personality was an attraction for the many beautiful women he met, some of whom he married. They included singer/actress Joan Barton, who once co-starred with John Wayne, and Patricia Stevens, owner of a nationwide chain of finishing schools.

Marriage wasn’t Muntz’s strong suit. But given his electronics expertise and experience in selling and customizing automobiles, the notion of a viable new stereo format for cars was a marriage made in Hollywood heaven. Car record players of the era were not just limited to the privileged, they suffered more than the occasional (literal) bump in the road.

In September 1961, Muntz formed Muntz Music in Beverly Hills. His stereo car innovation centered around the Fidelipac or cart, a magnetic tape sound recording format used by radio stations for music, commercials, jingles and station identification. He had inexpensive Fidelipac players custom made in Japan and licensed music from several record companies to be duplicated on those carts. For better sound quality, his players used the latest mass-produced stereo tape heads that produced four recorded tracks on a standard 1/4-inch tape.

The players were an instant hit in California, where they got maximum public exposure as the car accessory de rigueur. According to a promotional section in Billboard magazine’s Sept. 17, 1966 edition celebrating the five-year anniversary of the Muntz Stereo-Pak 4-track cartridge system, Sammy Davis Jr. bought the first Muntz Music Model 500 unit in January 1962 for $225. Other celebrities quickly followed. Wrote recording-history.org: “By 1963 Muntz players were to be found stylishly adorning the underdash regions of Frank Sinatra’s Riviera, Peter Lawford’s Ghia, James Garner’s Jaguar, Red Skelton’s Rolls Royce, and Lawrence Welk’s Dodge convertible, not to mention Barry Goldwater’s ride (make not known).”

In 1964 and 1965, major record labels issued new releases and old favorites on 4-track. Home players were built. Warner Bros./Reprise Records, the latter Sinatra’s own label, took out an ad in Billboard in 1966 thanking Muntz for “pioneering and shaping, singlehandedly, the development of the Continuous Loop Cartridge into the awesome, burgeoning potential its refinement represents.”

But as Sinatra and the Madman would tell you, some marriages aren’t meant to last.

Ironically, the 4-track was made obsolete by a modification that was of poorer quality. Bill Lear, maker of the Lear Jet, was introduced to the 4-track during a car ride with Muntz. Lear’s company “updated” Muntz’s technology and developed the 8-track, in which eight tracks were squeezed onto the same quarter-inch tape. “This reduced the amount of decibels you could put on that tape,” says Jim Muntz, who worked closely with his father on the 4-track format.

The result was inferior sound. But because the 8-track format allowed twice as much music on the same length of tape, it caught on as more economical. Lear struck a deal with Ford that made it a built-in option for its new models. Muntz couldn’t stop that momentum. His ad in the Sept. 6, 1969 issue of Billboard touted the 4-track with a slogan “More with four”—twice as much tape, more fidelity, etc.—and said the 8-track “was like running eight cars down a four-lane highway together.”

Production of his 4-tracks ended in 1970. Meanwhile, the 8-track became a ubiquitous, albeit later ridiculed, pop culture symbol that provided an enduring life soundtrack for millions of baby boomers. (Few know that 8-tracks were sold as late as 1988 by Columbia House and RCA record clubs.)

“What surprises me is, even people who are aware of an 8-track and think they know about it, a lot of them don’t know what 4-track was,” Tee says. Adding to the confusion is the fact that an 8-track and 4-track tape look identical from the front; 4-tracks are identifiable by a Christmas ornament-shaped hole on the upper left side of the back for use in 4-track players (and a select few players that accommodated both formats).

Later, Muntz sold products ranging from giant-screen televisions to cellular phones. He holds four patents, all connected to projection televisions, from 1976 to 1981.

“I went to work for him selling the giant-screen televisions,” says Tee Muntz, who had worked in the Muntz car stereo service department in Van Nuys, California, while in high school. “He was the first to build them in the United States. … After he passed away, my brother ran the business and I ran it with him for a while.

“We were the largest cellular phone retailers in California when he died, one of the first in the state. We had every other retailer in the San Fernando Valley so (angry) at us it was crazy, because he would sell them at or below cost because of the residual we would receive from the phone company.”

Despite his father’s reputation as a wild maverick, Jim Muntz says Earl Muntz’s most important quality as a businessman may be overlooked. “Personality and drive were two of his strengths, but the biggest was that honesty was everything to him. He understood the value of trust. His word was his bond.”

I knew Earl as a customer and friend. Heven was an incredible man. He insisted that I never smoke because of the pain he was suffering with end stage lung cancer. Thank you for all of your help and guidance

Stan thank you so much for sharing your experience with us. Nice to hear that Earl’s influence extended well beyond the world of invention.

We respect your privacy and will never share your information.
wpDiscuz
2
0
Would love your thoughts, please comment.x
()
x
| Reply