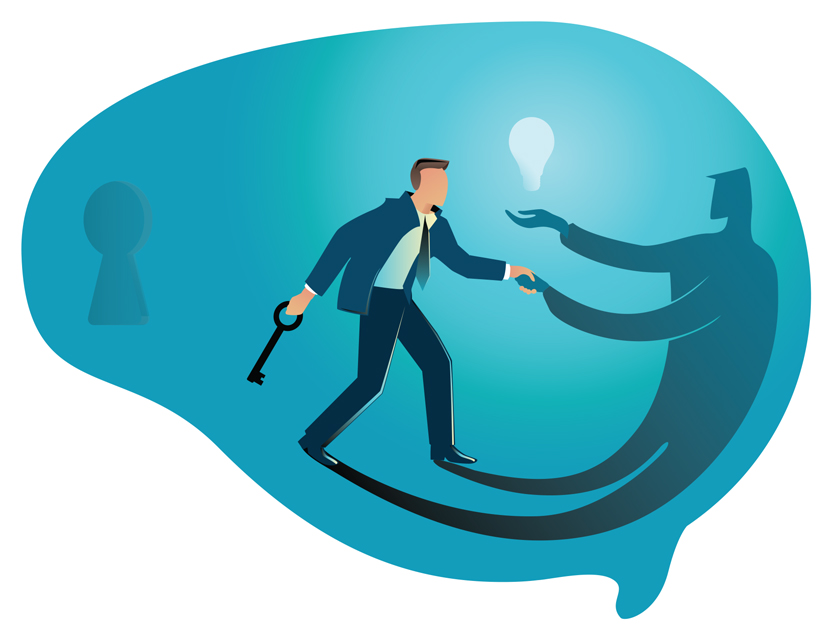 The unconscious mind can provide inventors with some amazing surprises

It is our unconscious mind that contemplates the problem and often provides the answer without our conscious struggle.

Archimedes sat in his bathtub, pondering how to prove that a certain goldsmith had adulterated the gold object he was making for his customer.

Adding less-expensive silver to the gold was a dishonest way a goldsmith could increase his profit. And in the third century BCE there was no way, visual or chemical, to be sure the goldsmith wasn’t cheating.

In an instant of revelation, Archimedes had the answer: Dip the object in water and determine its volume from the volume of water it has displaced. Then, calculate how much it should weigh.

Archimedes yelled, “Eureka, eureka!” Translated: “I have found it.” His wife came rushing in, scolding, “Well, whatever it was, it had no business being in our bathtub.”

The point is that Archimedes, noting the displacement of water from entering his tub, grasped a new insight to his reasoning on the gold authenticity problem. We have no way of knowing how long he struggled with the problem, but chances are it had been longer than just the few seconds it took him to lower himself into the water.

Isaac Newton is said to have discovered the principle of gravity from the inspiration of an apple falling on his head. Einstein “saw” the equivalency of gravity and accelerated motion in his eureka moment. And Paul McCartney woke up one morning with a tune in his head. With a bit of work on the lyrics, it became the famous Beatles song “Yesterday.”

You, too, may have experienced solutions to problems, or the finding of misplaced objects, at a time when the answer seemed to appear “out of the blue” or upon awakening. It is our unconscious mind that contemplates the problem and often provides the answer without our conscious struggle.

I suspect that in most cases, we have fed information to the unconscious without being aware of doing so. But the process can be intentionally practiced and provide amazing results.

Several years ago, I was daydreaming about my boyhood experiences on a farm in Michigan. I recalled a small newspaper, two sheets of copy paper folded in half. It was published in a town that had a post office, a diner, and a bakery—that’s all.

The Mears Newz cost 5 cents, and was hand delivered to many farmers over many miles on foot by its editor and publisher whose unusual name I could not recall. I went to bed that night asking my unconscious mind to locate the fellow’s name. In the middle of the night, I sat up, still half asleep, and announced, “Swift Lathers,” the publisher’s name.

My wife, now awake, looked at me with a frown and asked, “What the heck is a Swift Lathers?”

I have also experienced solutions to mechanical problems by carefully defining the problem. I sketched out as much of the mechanism as I could on paper and wrote down the solution I was seeking.

I was working on a novel bicycle transmission that would be superior to the derailleur. It would be shiftable under power. The answer came a couple of weeks later as I was driving from my home in Connecticut to visit friends in Vermont.

I visualized the components and how they operated to achieve the effect I was seeking. I built a prototype and was pleasantly surprised to witness its operation to be close to what I had anticipated.

This was not a gradual comprehension but an instant of visualizing in a two-dimensional layout, the form and operation of the critical parts.

On a larger scale, when my first son was a baby, I walked into the electronics supplier where I bought components for projects that I was working on and discovered a display of hand-operated machines for fabricating precision sheet metal products. I imagined owning these well-made machines someday as the basis for a business.

I was not in a position to risk starting a business, but I wrote out a plan for the specific machines I would acquire, who my customers would be, and forgot about it. Twenty-seven years later, quite unexpectedly, even impulsively, I started a business when my employer had a need for power supply housings and a local vendor could not be found. I was generally not impulsive, but in this case I acted without deliberation.

About a year later, my employees had gone home and I was standing, arms folded, looking over the machines, feeling comfortable about the progress that had been made. Eureka! (I really didn’t yell it, or even say it, but I felt it.)

I was shocked. This was the unfolding of the plan I had written so many years before.

So, in summary, define what you are searching for by writing. I believe that communicating with the unconscious mind requires specifics and that there is precision and magic in putting a pencil to paper—not only in the act itself, but in the affirmation that comes from seeing the words on paper, preferably repetitively.

Psychologists are still working on a fuller understanding of the unconscious mind. But psychologist Carl Jung had this to say for inventors or entrepreneurs: “The creation of something new is not accomplished by the intellect but by the play instinct acting from inner necessity.”

In any case, we need not fully understand the theory to have the advantage of what works. Try it.

And prepare your mate or significant other for unexpected cries of “Eureka!”—hopefully not in the middle of the night.