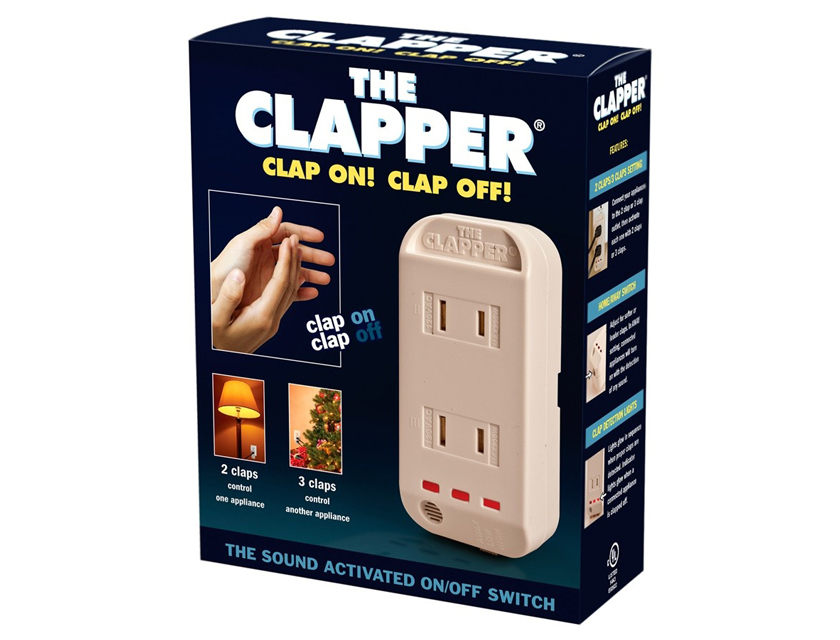 “It was a Crapper, really. I said, ‘Wouldn’t it be nice if you had one that worked?’”

And you thought Alexa is cool—or for lazy people, depending on your point of view.

The Clapper was an early home automation innovation almost a half-century ago. Just plug it into any standard wall outlet and clap twice to turn a lamp on or off. Clap three times to turn off the TV.

A simple invention with a kitchy TV ad (“Clap on! Clap off!”) that is an enduring part of popular culture, The Clapper has a colorful history.

Some People of a Certain Age remember seeing generic commercials for The Clapper in the 1970s, but the iconic commercial featuring an old woman lying in bed and activating the device with two hand claps first appeared in 1984. The commercial was still appearing into the 2000s, the product advertised as the ubiquitous “great holiday gift.”

(Incidentally, some websites claim that woman was octogenarian Clara Peller of “Where’s the Beef?” fame, but the woman does not resemble her and there is nothing factual to support this. At least a couple other sources say the woman was Thelma Goodwin of Indianapolis.)

Tedium.com says the original Clapper was patented by Peter Liljequist of Canada and Kou I. Chen of Taiwan in 1985. But it had its problems:  Foremost was the frequent occurrence of lights turning on or off when a dog barked or a door slammed.

Inventor Carlile Stevens told the Palm Beach Post in 2001 he called Joseph Pedott, owner of Joseph Enterprises. The San Francisco-based novelty and gadget company, also known for the Chia Pet, had begun selling the product in 1984.

“It was a Crapper, really,” he told the newspaper. “I said, ‘Wouldn’t it be nice if you had one that worked? Think how many more you could sell.’”

Stevens and co-inventor Dale Reamer improved the product with The Smart Clapper, equipped with a microchip that can turn on and off random things based on the number of claps. He and Reamer were granted U.S. Patent No. 5,493,618A in 1996, assigned to Joseph Enterprises.

Joseph Enterprises still sells The Clapper on Amazon, among other places; the product is either considered a gag item because of the corny commercial with the old woman, or a true home convenience.

Another association with an old woman was not as pleasant. Not long after the notorious McDonald’s “hot coffee lawsuit”—when a 79-year-old woman sued the company after spilling hot coffee on her lap in her car in 1992—80-year-old Edna Hobbs sued Joseph Enterprises. She claimed she injured her hands while using The Clapper.

Hobbs argued The Clapper was defective and that the manufacturer failed to warn about the potential for injury by clapping. But a New York appeals court cited The Clapper’s manual, which said “[s]enior citizens or handicapped persons who find clapping difficult may prefer to use an inexpensive clicker, available at most novelty retailers.” The court also said the plaintiff admitted to not adjusting the device’s sensitivity control.

Case dismissed. No one in the courtroom gallery was allowed to clap.

The Clapper in Pop Culture

* In an episode of the TV show “Nanny and the Professor” (1970-71), the professor’s son, Hal, demonstrates his invention of a sound-activated switch that is triggered when he claps. Ironically, the switch is also activated by other loud household noises.

* In the 1989 movie “Uncle Buck,” the title character uses The Clapper to turn on the lights in his apartment.

* In the 1991 movie “What About Bob?” Richard Dreyfus turns off his lights with The Clapper.

U.S. Patent No. 5,493,618A (1996), assigned to Joseph Enterprises, is titled “Method and apparatus for activating switches in response to different acoustic signals.”