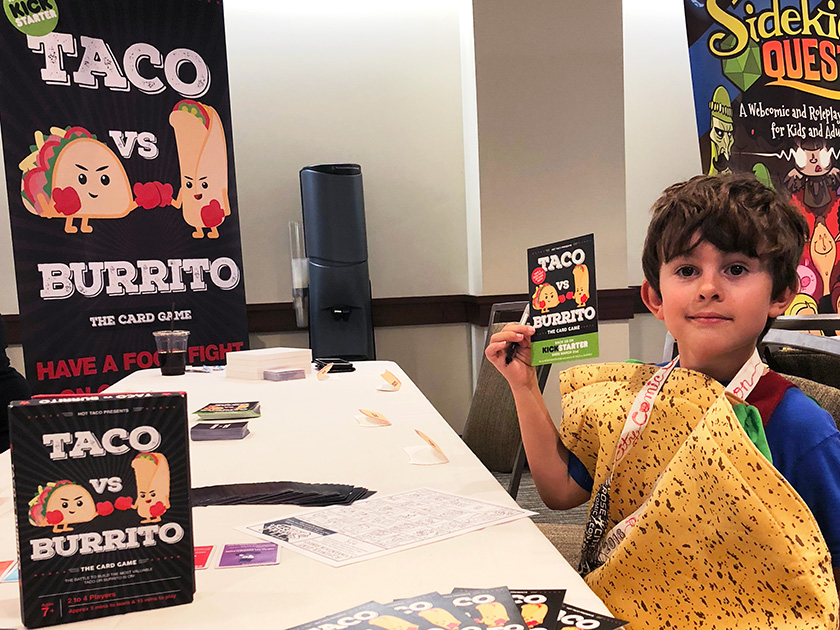 Through his mother’s invention of a magnetic hanging system, Alex Butler witnessed firsthand the hard work and dedication it took to achieve success.

Meet Alex Butler. He was 7 when he came up with an invention idea.

Since then, with the help of his mother, he raised $24,312 on Kickstarter in March 2018; launched his product on Amazon at the end of November; and is selling over $30,000 in product per month on Amazon.

He is now 9 and beginning the fourth grade.

How does a little kid accomplish what most adult inventors can’t seem to do?

Put another way: How does a little kid invent a game, launch a successful Kickstarter campaign and become a top card game on Amazon—and make more money than most adults?

To fully appreciate how it happened in this case, you should know a little about the woman who gave birth to him and served as his inspiration.

When Alex was 4, he was creating a lot of artwork. His mother wanted to put it up but be able to easily replace it when he created new artwork.

So she came up with a product that would enable her to do that. At the end of April 2015 she launched a Kickstarter campaign for a magnetic hanging system called Good Hangups, raising just over $28,000. Her funding goal had been $5,000.

A little over a year later, she appeared on Season 8 of “Shark Tank” and netted herself a deal with her perfect Shark, Lori Greiner. Leslie Pierson has also appeared on QVC numerous times and even won The Next Big Thing contest on NBC’s “Today.”

Seeing that willingness to go for it, hard work and ultimate success must have rubbed off on her boy. In September 2017, the following conversation took place between mother and son (paraphrased, of course):

Alex: Mom, I wanna make a card game called Taco vs. Burrito, and I wanna do a Kickstarter.

Mom: OK. How do you play the game?

Alex: I don’t know yet, but I wanna make the game and do a Kickstarter.

Just like that, mother and son set out to develop the game and launch a Kickstarter campaign—after she tried to dissuade him by telling him how much work it would take. In true entrepreneurial fashion, Alex was not easily dissuaded.

Every weekend, they would walk the dog to the coffee shop and play a different game, and then play the latest version of the game Alex had conceived. Each week, he would devise new ways to improve the current version—where players compete to create the weirdest, wildest meal.

Pierson credits that routine they developed as the key to Alex’s early success.

It’s a good lesson for inventors and entrepreneurs to keep momentum going. You have to put in consistent time and effort to get a product to market, even if it’s only a couple of hours a week.

Another crucial move was setting their Kickstarter funding goal very low ($1,000), which helps you move up the algorithm if you hit your goal quickly. They raised their $24,312 in a month.

Alex also came up with a great name that was funny and catchy—which goes a long way, especially in the game market.  He created an engaging video. And as important as anything, he wasn’t afraid to fail. I guess that’s one of the benefits of being a child entrepreneur.

Of course, the game has to be good, and he created a terrific one.

In fact, the month he launched on Kickstarter, Alex was part of the Indie Game Showcase at Emerald City Comicon. He wore a taco costume and played the game with a number of 40-year-olds.

Alex was lucky to have his mom as his inspiration. He saw her succeed with just an idea and witnessed firsthand the hard work and dedication it took to achieve success.

You may not have a parent or sibling as a model for your behavior or to help you push forward your idea. But as I’ve said, you can surround yourself with other inventors and product developers, and  help push each other toward success.

As for Alex, keep an eye out for his next game, Tokyo vs. Burrito. Something tells me it may be even more successful than his first.