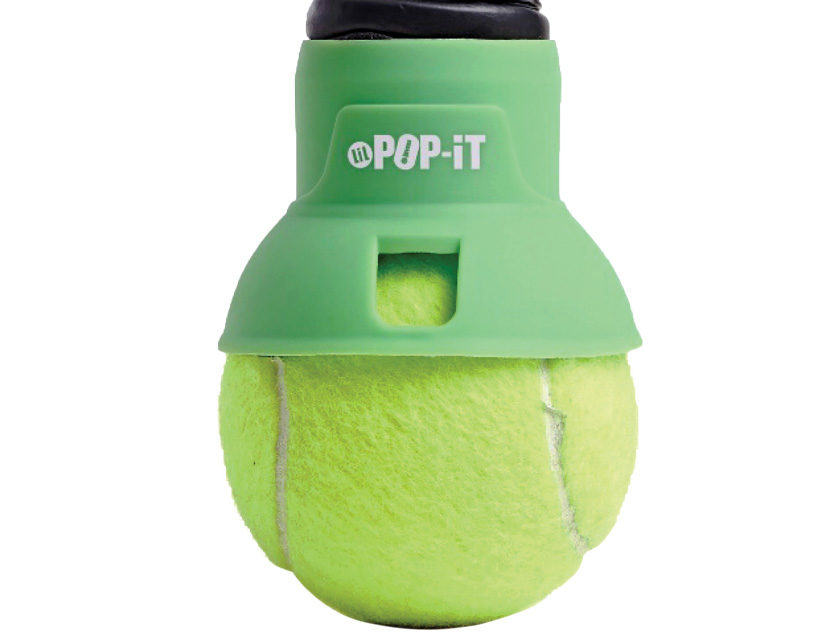 “I discovered that (POP-iT) continued working on so many tennis-related skill sets like distal eye-hand coordination, along with footwork. It was wonderful.”

Assists is not a statistic in tennis. But if it was, Inventors Digest would be credited with one for Jeff Nelson’s POP-iT.

About eight years ago, the father of three and former tennis instructor from Towson, Maryland, had one of his many inspirations. “I was always left after a drill or after a lesson picking up 50-plus tennis balls on the courts myself,” he says.

Nelson’s inventive quest was twofold: to end the cumbersome practice of bending all the way down to pick up the balls while adding utility for his students.

He cut a Whiffle ball in half, lined its inside with Velcro and screwed that to the top of his tennis racquet. “The Velcro sort of stuck to the felt of the tennis balls and I didn’t have to bend over anymore to pick up the balls.

“Well, after my students saw me using that, they wanted to try it and they loved using it. That was the genesis, my aha moment!”

Before long, Nelson began creating fun games using his first POP-iT prototype. This naturally progressed to being part of the lesson—a drill involving shuffle steps, competitions to motivate the kids.

“I discovered that it continued working on so many tennis-related skill sets like distal eye-hand coordination, along with footwork. It was wonderful. The bonus for me was when adults would see us using that POP-iT and ask me where they could buy one, or if I could make one for them.”

He soon discovered a growing need for his creation. But excitement morphed into frustration: Six years and 10 more prototypes later, Nelson didn’t know how to manufacture his idea.

This is where Inventors Digest came to the rescue.

“I would sketch drawings on paper and pencil,” he says. “Every season I would get those drawings out, make a few changes and at the end of summer I’d put them away.

“In 2017, I Googled ‘manufacturing and how to make stuff’ and came across an article in Inventors Digest about 3D printers and how they work. That was another aha moment!”

Nelson sought out someone with a 3D printer and embarked on the trial-and-error dance. Finally happy with his ninth prototype, his next step was to find a design firm and a manufacturer.

He found a local design firm for further, latter-stage refinement. “I had a manufacturer all set in China. The hardest part was being patient and sending samples back, asking for certain corrections.” But he knew he could not scrimp on quality in any way, or the product was destined to fail.

The invention’s utility meets its two original goals. There’s the POP-iT that facilitates ball pickup, as well as the POP-iT Program.

Nelson says he designed the latter to be “a framework of 25 fun games for tennis instructors, tennis pros and teachers to work from, add to, modify, put a little of their style into it.

“Teaching is a passion, a production, fun and an honor. I wanted to create the POP-iT Program as much for the students as for those using it.”

He also derives great pride in how POP-IT benefits and encourages wheelchair players: “I have a wheelchair tennis pro who utilizes it. She asked me, ‘Where was this 10 years ago?’ She put off learning the game because she didn’t know how she was going to get past the obstacle of picking up the ball.

“I think of all the athletes with limited mobilities, pedestrian or wheelchair players who can now play tennis, which is one of the few lifelong sports.”

The standard POP-iT (fits racquets 27 inches and up, over various grip sizes) and the LIL POP-iT (youth racquets 23 to 26 inches, also various size grips) are available on Amazon, Walmart, at various tennis clubs and the POP-iT website.

After all this time, POP-iT is still patent pending. Nelson explains:

“I feel a lot of inventors jump right from their idea to thinking they have to get a patent immediately. While it is important, patents are relatively expensive for the typical middle-income Inventor. I felt it wasn’t paramount in the beginning; I really needed to see if this was a product that people would want.

“Early on, the POP-iT was the pimple on an elephant’s hind end.  I choose to use my funds to manufacture and test the market. Once I discovered there was a need, I filed.”

A cursory view of Nelson’s YouTube videos reveals a man with palpable spirit and energy. He’s a natural teacher and ambassador for tennis, as well as for his invention.

“I have done two demonstrations, and it’s a blast! We have seven major events here in the U.S. and Canada, and I was scheduled to do a demonstration at four of them with local schoolchildren.

“However, with the COVID crisis those events have all been canceled. They will be rescheduled, and I hope to again be part of the plan.”

On the other hand, Nelson says there has been “a ton of interest” in using POP-iT to prevent contact with the ball during group youth lessons. Camps and the United States Tennis Association will use POP-iT in their programs to limit ball contact in group settings, he says.

Asked how the pandemic has changed his selling and marketing of POP-iT, Nelson responds: “Online, online, online sales!

“All signs seem to be pointing to tennis camps, academies and clubs being canceled, so I’ve shifted focus to online sales. I’ve utilized low-cost, no-cost social media to drive sales through Amazon. Two  clicks and you bought the item you’re looking for: pick, swipe, done, shipped in two days.

“This is perfect time to do promotions and blast social media posts, because everyone is home with lots of time surfing those social media channels. I do three to four Instagram stories a day with music—great ways to share, entertain followers and get the message out. I’ve hosted a live question-and-answer session and have been part of other live social media Q&A sessions.”